I left my heart in Lapland

A city girl lands in Lapland and is surprised to find that she loves the wilderness and the midnight sun.

For many, Lapland conjures up images of winter. But there’s a growing range of summer activities on offer that take advantage of the area’s natural beauty and endless light.

I’m a city person. During the past decade, I’ve lived in London, Vancouver, Toronto, and Helsinki. I’ve never lived in the countryside; even the suburbs make me feel a bit anxious, like I’m too far away from the centre of things.

However, that all changed when I visited Lapland for the first time three years ago, shortly after I moved to Finland. From the moment I stepped out of the airplane at Ivalo Airport, the country’s most northern airport, I was overwhelmed by the fresh air and the natural beauty visible from the tarmac, as we walked toward the small terminal building.

It was weeks from the summer solstice and already the night spilled into day, without the sun ever setting, which meant that I was able to pack a lot into my trip, from panning for gold in Tankavaara to whitewater rafting near the holiday resort of Saariselkä, and dipping into the cool, clean waters of Lake Inari, Europe’s sixth largest lake, which draws fishers from around the globe for its world famous salmon.

Since then, I’ve visited different areas of Finnish Lapland and tried various activities. I’ve learned to appreciate the quiet beauty of the wilderness, but I haven’t gotten over my surprise at spotting reindeer (they really are everywhere), and have even considered moving to Lapland. The laidback friendliness of the locals is a charming bonus.

Here’s my shortlist (by no means definitive) of where to go and what to do and see in Finnish Lapland:

I caught my first fish, a greyling, near Kuusamo, which is right on the border of the Arctic Circle. I’d never been fly-fishing on a river before and once I tried it, I was hooked. The Kitkajoki, Kuusinkijoki and Oulankajoki rivers in Kuusamo are renowned for the great trout that come from Lakes Paanajärvi and Pääjärvi in Russia.

The clean waters of Finland teem with a wide variety of fish. River fishing is allowed between June 1st and September 10th. Various lures and flies are permitted, but live bait cannot be used in rivers that have whitefish or salmonoids. Ice fishing and angling with a hook and line are allowed on lakes (with 180,000 of them in Finland, there are plenty of options) and ponds throughout the year by something called jokamiehenoikeus, or “everyman’s right,” which means that no permits are needed. General permits for lure fishing and special waters are needed.

“Everyman’s right” means foreigners and Finns have free access to forests, whether publicly or privately owned. Most routes are found in National Parks and close to holiday resorts, with varying terrain. Because there are few steep mountains in Finland, few hikes require rock-climbing abilities or equipment. 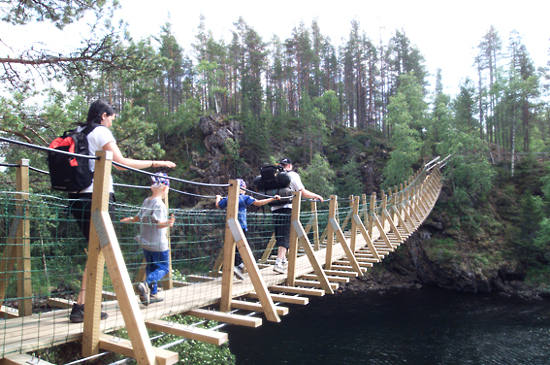 Among the best-known hiking trails are Pallas-Ounastunturi National Park; the 800-kilometre-long Kalottireitti (also known as Nordkalottleden Trail), which runs through the arctic fells of Finland, Sweden and Norway; Pyhätunturi; the Luosto area; Posio Korouma and the Urho Kekkonen (UKK) route in Salla. (The UKK trail is named after Urho Kaleva Kekkonen, who was one of the longest reigning Finnish presidents holding the country’s top post from 1956 to 1981.)

For a gentle introduction, try Karhunkierros (the Bear’s Trail) in Oulanka National Park, which was formed thousands of years ago when waters from the melting ice shaped the ravines, canyons and river beds. The longest trail (80 kilometres) starts at Hautajärvi Nature Centre and requires three to seven days. The shorter one, Pieni Karhunkierros (Small Bear’s Trail) can be easily done in an afternoon as it is 12 kilometres long.

The hiking is relatively easy and the scenery picturesque (reminiscent of an Akseli Gallen-Kallela painting), as the trails wind through forests and canyons.

As in all Finnish National Parks, there are log huts one can stay overnight in along the path; these are maintained by Metsähallitus, the state enterprise which is responsible for more than 12-million hectares of state land.

A number of festivals take place in Lapland during the summer. Possibly the most famous is the Midnight Sun Film Festival, which is held in Sodankylä every year. Here, the world’s cinema-rati come together for nonstop screenings at the top of the world. This year legendary French actor Michel Piccoli will attend the festival, as will Italian director and producer Gian Vittorio Baldi and Russian director Andrei Smirnov. There are always surprise guests – a few years ago it was director Francis Ford Coppola and the festival, which was founded by Finnish filmmaking brothers Aki and Mika Kaurismäki, is lauded for its lack of VIP ceremonies or services. Every film fan is welcome.

In Rovaniemi, home of Santa Claus, the Jutajaiset International Folklore Festival brings together midsummer ceremonies and music and dance from Argentina to Africa. In addition to international guests such as the Uinjilisti Choir from Tanzania, local Sámi rock bands including Naiv, Hra Apatia, Slain, Kasapanos and Stalingrad Cowgirls are on the bill.

Pyhä Unplugged is an acoustic music festival that has been called “the most sympathetic festival in Finland.” The performing artists are usually well-known Finnish rockers, who perform partly for the challenge of playing without amplifiers or special effects. Concerts are organised at the Hotel Pyhätunturi, Tajukangas (blues by the bonfire) and Aittakuru (an amphitheatre designed and constructed by nature.) Mato Valtonen, actor, inventor and musician, who is perhaps best known for his role in the Leningrad Cowboys, that lovely spoof band immortalised in Aki Kaurismäki’s films, is the artistic director. 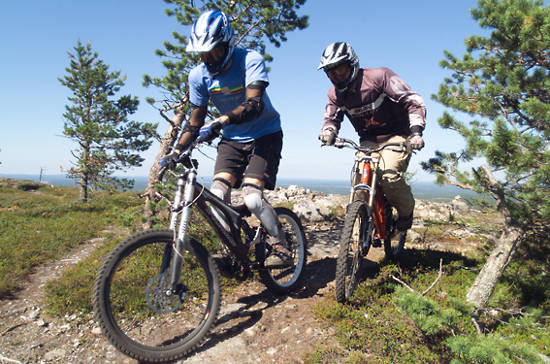 A growing number of companies provide summer safaris and excursions ranging from white water rafting to expeditions into the history and culture of the Sámi, the indigenous people of Scandinavia. A Santa Claus safari offered by a tour operator in Rovaniemi takes participants to the Santa Claus Village where they can meet the man himself and visit his workshop. Also in Rovaniemi, the capital of Lapland, Artikum, a science centre and museum that specialises in Lapland and the arctic regions, showcases the people, nature, history, customs and cultures north of the Arctic Circle. (Please note that the permanent exhibition of the Arctic Centre is closed until March 31st, 2007). Wild North (Villi Pohjola) is a versatile nature adventure tour operator that offers trips back in time – see what life was like in a logging camp – and a variety of programs such as Exotic Summer Wellness à la Wild North, which combines refreshing exercise and local culture in the peace and quiet of the Arctic. Wild North also operates about 200 holiday cottages available in different price ranges in peaceful, unspoilt locations.

The province of Lapland, “Lappi” in Finnish, is part of a larger geographical area in the far north of Finland, Sweden, Norway and Russia. In Finland, Lapland technically starts at the Arctic Circle, though cities such as Kuusamo, which are near the Circle are considered by many to be part of Finnish Lapland. The biggest towns in Finnish Lapland are Rovaniemi (the provincial capital), Kemi, and Tornio.