A spiral staircase, still covered with cardboard to prevent damage prior to opening Oodi’s doors to the public, cuts through the building.

Everyone knows Finnish people love outdoor sports and hiking in the forest. They also enjoy hard-hitting games such as ice hockey. But do you know how much they like libraries?

“Libraries have historically been important to Finns,” says Katri Vänttinen, the City of Helsinki’s director of library services. “Beginning in the 1800s, every village had a school and a library, and that created equal access to literacy and basic education.”

A platform for the future 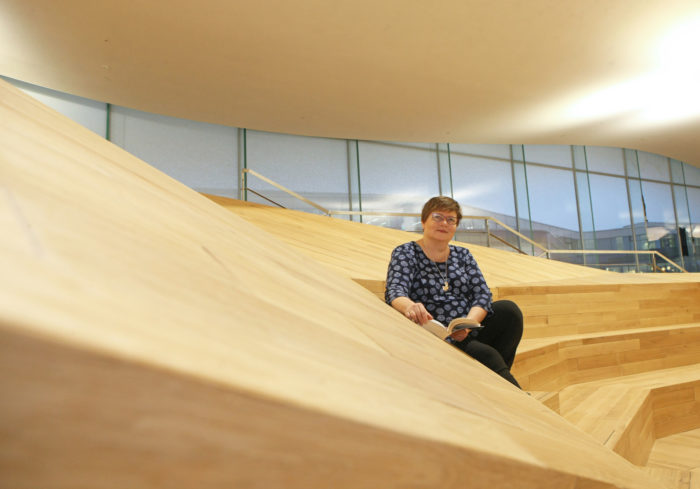 Katri Vänttinen, the City of Helsinki’s director of library services, sits with a book at one end of Oodi’s third floor.Photo: Hernan Patiño

“It used to be the library was about equal access to knowledge, but now most of that knowledge is accessible via your smartphone,” Vänttinen says. “Libraries today need to be thought of as a physical space, a platform for activities such as reading, learning and public discussion. They also provide access to equipment, data networks or expertise. We even have reading coaches who act like personal trainers, but for your reading.”

Oodi’s layout reflects the new roles of the library. The third floor can be considered the traditional library, with reading areas called “oases” and 100,000 books. The second floor is about creativity, and includes studios, music rooms, media rooms and a makerspace with 3D printers, sewing machines and other equipment. The first floor is for interactions. It has a café, restaurant, cinema, information points and a space curated by the EU.

“The biggest technical innovation by far is the ‘Cube,’ a room with smart walls,” says Vänttinen. “A person can use huge touch screens to transform the room into almost anything through 3D virtual reality. Artists are already planning to use the Cube for digital immersive art exhibitions, and medical students would like to study surgery there, using it as a virtual operating room.”

Even the book logistics are highly innovative. When a borrower returns a book, the system scans it, then a self-guided vehicle transports it through the library, placing it by the correct bookcase for the librarians to reshelve.

A unique part of the system 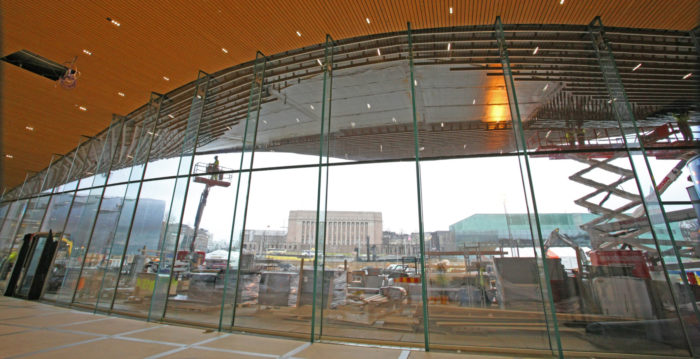 On one side of Oodi, the curved perimeter of the windows frames the nearby buildings of Kiasma Museum of Contemporary Art (left), Parliament (centre) and the Music Centre (right).Photo: Hernan Patiño

Oodi is part of HelMet (short for Helsinki Metropolitan Area Libraries), a library platform covering the capital-region cities of Helsinki, Espoo, Vantaa and Kaunianen. Each one owns its own assets and data, but they are shared in HelMet. A resident of one city can request a book from a library in one of the other municipalities and receive delivery at her nearest branch.

In a way, Oodi is simply one of the 37 libraries in Helsinki. Yet it is also unique. Oodi possesses its own branding and website, and is considered a separate administrative division within the system. Its dramatic location also sets it apart: in the heart of Helsinki, it forms part of a constellation that includes Finlandia Hall, Kiasma Museum of Contemporary Art, Parliament, the Music Centre, the Central Railway Station and Sanoma House, home of Finland’s largest daily paper.

Vänttinen says Oodi is already receiving enormous international visibility thanks to its location and size. At the time of writing, the Helsinki library system gets 6.3 million visitors annually; for Oodi’s first year the projected total for Helsinki is eight million, with Oodi itself reaching about 2.5 million. 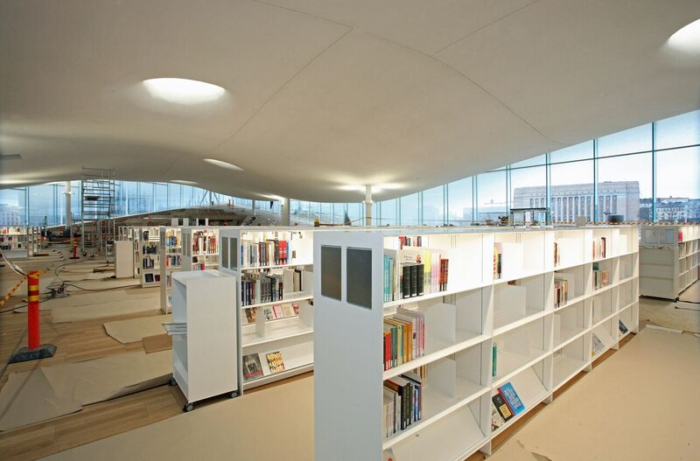 The third floor of Oodi, here in the process of being stocked with books before the grand opening, is the part that most resembles a traditional library.Photo: Hernan Patiño

“Oodi does have a special role as a flagship library,” says Vänttinen. “It is a huge architectural phenomenon in a symbolic location. It also has a special duty to interact with society – not just residents, but also tourists. People might come from far away to experience this building, and it will be their starting point for getting to know libraries in Finland.”

A patron can borrow books, movies, audio files, musical instruments or specialised machinery at Oodi. However, it can also play an important role in modern society by bringing people together, creating interactions and making things happen.

“I’m confident that Oodi will be the most popular meeting place because of its nature as a free space, open seven days a week, centrally located and convenient in all kinds of Finnish weather conditions,” Vänttinen says. “It is simply easiest to say ‘Let’s meet at Oodi.’”

Books are close to the Finns’ hearts. On average, every Finn buys four books and borrows a dozen from the library each year.