The Finnish capital is small enough to lack big-city stress, yet cosmopolitan enough to offer a large selection of dining and shopping.

Helsinki is lauded for its natural beauty, but these days the Finnish capital is a veritable mini-metropolis. Head for the Esplanade and its environs where you can dine at Michelin-star standards, enjoy a rooftop cocktail, and shop ‘til you drop – all without the crowds, pollution and long travel times that larger cities have.

A stroll down Helsinki’s picturesque Esplanade is like a walk through past and present. The boulevard was once a political dividing line: Finnish-speaking Finns walked on the south side (Eteläesplanadi) and Swedish-speaking Finns on the north side (Pohjoisesplanadi). Today the political divisions are gone, and the bustling boulevard is a microcosm of domestic and international design, culture and cuisine. Lined with a mix of modern Alvar Aalto-designed interiors and exteriors (Artek, the Academic Bookstore, and the upscale restaurant Savoy), its old-world grandeur is juxtaposed with touches of the Finnish minimalist aesthetic.

Exquisitely restored to its 19th century riches, the five-star Hotel Kämp hosts international celebrities ranging from royalty to rock stars such as Mick Jagger when they’re in town. It’s also where Finnish greats such as composer Jean Sibelius, artist Akseli Gallen-Kallela and poet Eino Leino held legendary parties that lasted for days. Here, political history was made: the identity of the emerging Finnish nation was blueprinted and important political issues sealed at its tables in the early 1900s. 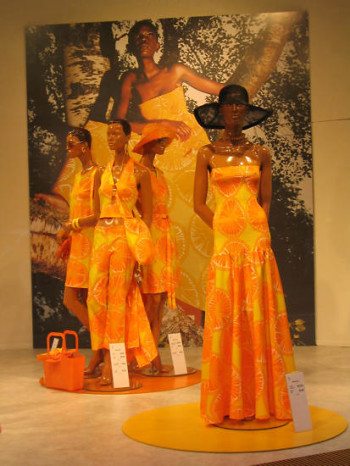 Adjacent to the hotel, Kämp Galleria houses an array of boutiques. For example, the Moomin Shop sells toys and babywear based on the loveable Moomintroll characters created by Finland’s revered author/illustrator Tove Jansson, while next door, designer Juha Tarsala sells his women’s shoes that are a hit with fashionistas and regular folk alike.

A lively park runs between the south and north side of the Esplanade. During the summer months free jazz concerts are held on its open-air stage while in December a traditional Christmas market takes over. At the north end lies Teatteri, the hip restaurant, bar and nightclub that takes its name from the Swedish Theatre (teatteri) on the other side of the building. At the south end, historic restaurant and café Kappeli offers a more classic take on afternoon coffee or an evening meal on the glass veranda. Try their Sibelius menu which features smoked arctic char with beetroot mousse as a main.

For the seasoned shopper, Scandinavia’s largest department store, Stockmann, boasts everything from fresh ciabatta bread flown in from Spain daily to golf equipment and designer watches under one roof. En route to the south harbour via the Esplanade, there are three Marimekko shops, including the flagship store, where the unique, colourful cotton prints and fashions that bring cheer to homes throughout the world are sold. Also on the Esplanade is Artek, founded by Alvar Aalto, Finland’s Frank Lloyd Wright. The shop sells his timeless furniture along with other designs. Iittala has a large shop on the boulevard, featuring its classic designs for glassware and dishes and highlighting its latest styles, while Della Marga (Chanel sunglasses, anyone?), Longchamp, and Rils offer a mix of Finnish-designed and international clothing, bags, accessories. 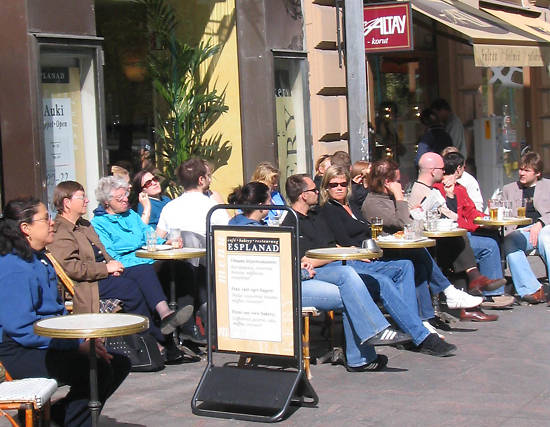 Café Strindberg is reminiscent of a Parisien café and bistro, with its Burberry-clad clientele and Helsinki who’s who jostling for a table. Nearby, recently renovated Café Esplanad offers more casual fare, but is equally busy with its seemingly never-ending line-up for their scrumptious korvapuusti, a cinnamon bun featuring a unique Finnish touch – cardamum.

Just off the Esplanade is Mecca on Korkeavuorenkatu, the city’s newest it-spot, a chic lounge and restaurant. Mecca’s founders include Hans Välimäki, whose Chez Dominique around the corner on Ludviginkatu is Finland’s only two-Michelin star restaurant and deservedly so: their Menu Surprise is guaranteed to leave a delicious impression long after the last bite.

For après shopping refreshments, head towards the harbour and pop up to the Terrace Bar on the top floor of the Palace Hôtel on Eteläranta. The view rivals that offered decktop on the cruise ships that ply the harbour waters below. As the Terrace Bar is only open during the week, head to the intimate Ateljee Bar atop Hotel Torni (about a five-minute walk from the harbour) for a view that some say stretches to Estonia on a clear day. (Ateljee is open seven days a week.)

Near the Palace Hôtel is the beautifully restored Old Market Hall (110 years old), which offers shelter from the outdoors and everything a market hall could sell from sausage and salmon to fine wines and sushi. Adjacent is the staple of Helsinki tour guides, the Market Square, where vendors hawk their fresh fruits and vegetables, fish and baked goods along with Lappish souvenirs. Ferries for the fortress island of Suomenlinna leave from the cobblestone market’s south end.

Nearby the Havis Amanda statue, a symbol of Helsinki’s status as daughter of the Baltic, a host of fine restaurants offer dining options, including newcomers Sasso (Italian) and the sleek Fish Market, which is at cellar level.

From the corner of the Esplanade and Sofiankatu, you can see the open-air museum street which captures bygone days including those under Russian rule, and catch a glimpse of the Lutheran Cathedral, the work of Carl Ludvig Engel (1778-1840) who shaped much of Helsinki’s neo-classical core.

It’s all in an afternoon’s walk.