The Finns know weather – they experience quite a bit of it – and now Finnish meteorological know-how is in global demand.

Dramatic cloud formations cross the sky above the lighthouse on Märket, a skerry in western Finland’s autonomous Åland Islands.

They know a thing or two about the weather in Finland. They get plenty of it, after all.

Finns are even keener than most to know what the weather is going to do. In the harsh winters, it’s a question of national economy, even survival, of Baltic Sea ice cover and traffic conditions.

During the fleeting summer it’s a question of factors affecting the growing season on one hand and, on the other, of how to allocate precious vacation: the reliably clement beaches of Thailand or the lakeside Finnish summer cottage?

The Finnish Meteorological Institute (FMI), founded more than a century ago, is charged with the responsibility of imparting information about the whims of the Finnish climate. The fact that this climate is changing, for whatever reason, means that FMI is increasingly engaged in researching long-term scenarios – an area of expertise that has attracted interest and business from around the world.

“We have invested a lot in the last two years to increase our consulting service activities,” says Harri Pietarila, head of consulting services at FMI. “We’ve established a dedicated unit, increased manpower and increased the number of projects and subsequent income significantly. It will be a rising trend through 2011 at least.”

As the economic and social results of climate change, such as agricultural yields and natural resource availability, fall into sharper focus, governments are recognising the need for accurate forecasts and better preparations for extreme weather events. “There is an increasing global demand for better meteorological and climate data and services,” says Pietarila. “So we are in a very competitive and growing market worldwide. 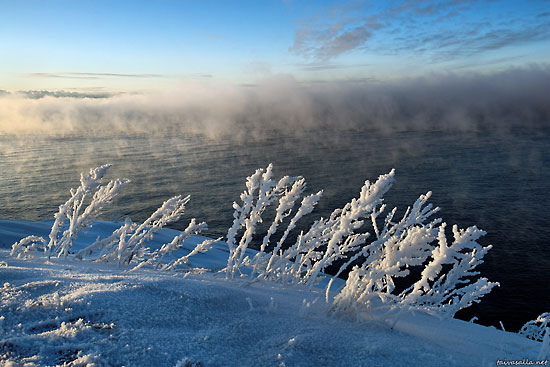 Sea smoke: On a cold winter morning, fog drifts over the open sea past frost-decorated vegetation on the island fortress of Suomenlinna, outside Helsinki.

“Almost all of our projects and work are related to climate change,” he continues. “Observation networks; climate projections; adaptation advice; early-warning system and disaster risk reduction projects; weather and climate production systems – we offer them all. International cooperation takes the form of commercial consulting projects, research projects, bilateral cooperation with sister organisations, and exchanges and cooperation between experts and scientists.” Governments, companies and other meteorological institutes all benefit from FMI’s expertise.

FMI’s projects extend from the Balkans to the Caribbean and from Central Asia to the Pacific. A project in Nepal and Vietnam, for example, will help those countries to prepare for dangerous weather events causing flooding and landslides [full disclosure: the project receives funding from the Finnish Ministry of Foreign Affairs]. Such non–profit-making projects are carried out under the Institutional Cooperation Instrument (ICI), which facilitates the participation of government institutes and agencies in development cooperation. FMI has other similar projects in progress in Peru on a number of Pacific islands.

Income from the institute’s commercial activities is close to half of FMI’s total chargeable income, including that from activity required under Finnish public law, rising from a little more than 4 million euros in 2006 to 6.2 million in 2009. According to Pietarila, FMI has several competitive advantages from a commercial consultative perspective, as well a head start over other meteorological institutes.

“We offer a better organisational structure, a better system for production delivery covering the whole chain from observation to end products, and customer orientation. FMI is both a service and research organisation, while most of our sister organisations are only service organisations, so we always have the best research information available as well as high-end systems for service. And we have good connections and partnerships with Vaisala, the world-leading Finnish manufacturer of meteorological instruments.”

Every nation likes to talk about its weather as if it’s a defining national characteristic, like the local language. In reality, of course, the climate and its short- and long-term phenomena and consequences have no respect for borders. The forecast can only get fairer for FMI’s exports of weather-related expertise.