Finnish President Sauli Niinistö wins a second six-year term with 62.7 percent of the total votes, making a second round unnecessary. The result surprises nobody, but every election plays an important role.

Sauli Niinistö smiles for the cameras at an election-night reception in Helsinki after results showed that he had won a second six-year term as president.

While the incumbent entered with a strong position and was always the favourite, the election, held on January 28, 2018, underscores the significance of the democratic process.

The campaign season lasts, mercifully, only a few months, but it allows for debate and exchange of ideas on the national stage, and all parties that decided to field a candidate received media coverage and a turn at the microphone. Voter participation was 69.9 percent, compared to the previous presidential election, in 2012, which saw a participation rate of 72.8 percent.

The 2018 runner-up was the Green Party’s Pekka Haavisto, with 12.4 percent of the total. He also got second place against Niinistö in 2012, although that contest progressed to a second, run-off round. The rest of the 2018 candidates shook out as follows: Laura Huhtasaari (“Finns” Party, 6.9 percent), Paavo Väyrynen (previously Centre Party, running as an independent, 6.2), Matti Vanhanen (Centre Party, 4.1), Tuula Haatainen (Social Democrats, 3.3), Merja Kyllönen (Left Alliance, 3.0) and Nils Torvalds (Swedish People’s Party, 1.5).

Parties and candidates who knew they had no chance of winning participated for the opportunity of setting up for the next election cycle – the parliamentary election in April 2019. The presidential election percentages are almost certainly not an indication of how the parliamentary election will play out. However, something can be gleaned by looking at the regional runners-up. The country is not unified, despite Niinistö’s popularity: Väyrynen or Vanhanen held second place in much of northern and central Finland, while Haavisto covered large swaths in central and southern areas, and Huhtasaari had significant patches in western Finland. Torvalds did predictably well in the west coast regions where large concentrations of Swedish speakers live.

Looking for strength in stability 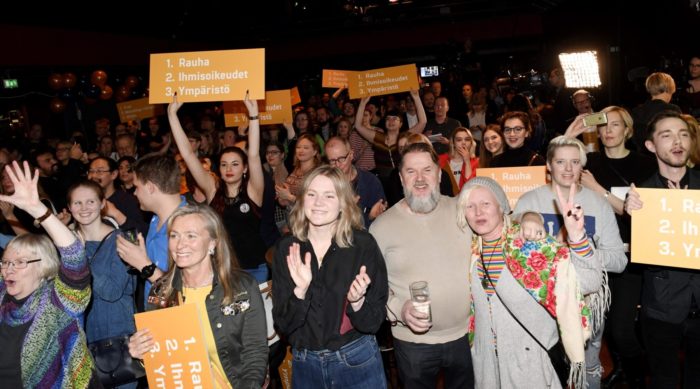 Niinistö, who made his career in the moderate conservative National Coalition Party, ran as an unaffiliated candidate. This wasn’t such a big leap, since the president of Finland always renounces formal party membership when taking office, but it allowed the incumbent to campaign without becoming entangled in party politics.

In his acceptance speech, Niinistö said, “This is a fine country. And we’ll take care that it remains fine.” After a race that included seven other candidates, which is not unusual for Finnish presidential contests, he also pointedly mentioned that one of Finland’s strengths is that people can disagree constructively, respecting viewpoints that are different than their own.

He alluded to the fact that Finland was chosen as the most stable country in the world by the Fund for Peace in both 2017 and 2016. “That’s a big deal,” he said, and added, “Small but stable is much stronger than large and broken.”

As Finnish voters prepare to choose a president, political reporter Unto Hämäläinen explains why the incumbent, Sauli Niinistö, enjoys such popularity, and what to expect from the election.

One of Finland’s most inspiring celebrations arrives every year on December 6: Independence Day. (Try pronouncing it in Finnish, Itsenäisyyspäivä; or in Swedish, Självständighetsdagen.) It took an unusual form in 2020, and 2021 also sees special arrangements.