Carina Räihä shared her thoughts with us before leaving on a journey that saw her become the first Finnish woman to climb Mount Everest.

A far cry from the office: Carina Räihä (left), who on May 17, 2010 became the first Finnish woman to climb Everest, sets off for a training session on a glacier on Kebnekaise Mountain in Sweden.

Carina Räihä is alive and well and back in Finland after enduring every imaginable discomfort as she became the first Finnish woman to scale Mount Everest and stand on top of the world, reaching the summit on May 17, 2010. We talked with her just days before she started her quest.

“I think people like me have an extra gene that makes us want to do things that don’t make sense. It doesn’t matter how terrible it is while you’re doing it, you go back for more.”

Carina Räihä is sitting in a café in a shopping mall in an Espoo suburb. Kids are running around screaming nearby; teenagers are munching on burgers. Nothing could feel further from Räihä’s intended goal, the thing that “doesn’t make sense”: to be the first Finnish woman to stand on the peak of Mount Everest, the world’s highest mountain.

Less than two years ago, Carina, who holds a masters degree in economics, was working in a Helsinki city office, absorbing the pressures of the financial world. Most of us only gaze out of the window and dream of leaving the nine-to-five world behind. In Carina’s case, she decided, at the age of 42, to take the biggest challenge of her life. 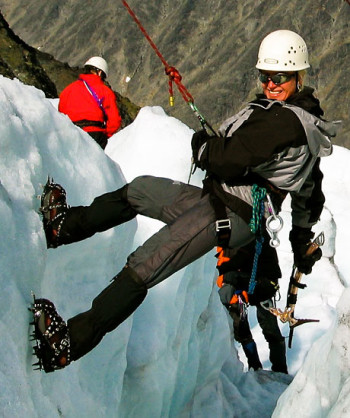 “It’s a natural feeling to want to see the top of a mountain, to see what’s on the other side,” says mountaineer Carina Räihä.© Carina Räihä

“I wanted a change in my life, to do something I really loved,” she says. “In December 2008 I left my job. The idea of climbing Everest came to me last summer. I was at the summer house, enjoying an easy life, walking in the woods, and I could have done anything. But I decided the time was right to fulfil my dream. I thought I might never get another chance.”

Mountaineering is something of a minority pursuit, and in a relatively mountain-free country like Finland, it’s especially hard to find an organisation that coaches the activity. Finland boasts one male “celebrity mountaineer” in the form of Veikka Gustafsson who in 1993 became the first Finn to reach the summit of Everest and whom Räihä mentions often as an inspirational figure. In terms of female mountaineering, she herself is setting the pace.

“Only perhaps 10 percent of the total number of mountain climbers in Finland are women, and I know just about all of them,” she says. “There are only a few of us who are crazy enough to do this. It is kind of insane to spend so much money, time and effort to simply climb a mountain and come back. It’s not even as if it’s nice.”

“It’s miserable, it’s dangerous and it’s very expensive,” says Räihä. “But there is something about mountains that is powerfully attractive. It’s a natural feeling to want to see the top, to see what’s on the other side. But for Everest, you need to be mentally and physically fit. In fact, some say it’s more important to be mentally strong. You have to be able to make decisions on your own and accept being in a dangerous place alone.”

Part of her physical and endurance training has taken the form of stomping up and down through the deep snow on an artificial hill in Malminkartano, a suburb of Helsinki. Ascending a mere 90 metres in 400 steps may not sound like much when compared with the 8,000-plus metres of Everest, but it’s a tough enough test when you’ve got a 20- to 30-kilo backpack to carry.

“I don’t mind about the weather,” she says. “I’ll train in any conditions, preparing mentally for the miserable times, because there will be plenty of those.” A yoga and meditation regime also contributes to the preparations.

Look fear in the face 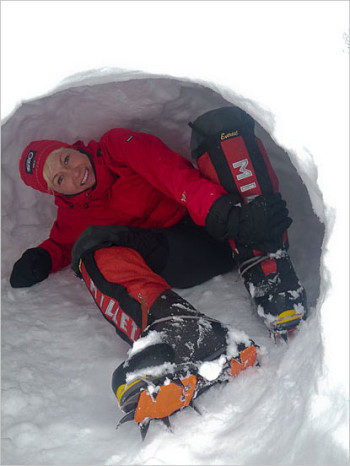 For those of us who get dizzy just thinking of climbing out to clear snow off the roof, the idea of hanging from a sheer rock face seven or eight kilometres above sea level is enough to make us faint. You’d think a head for heights is the minimum requirement for an Everest attempt. Apparently not:

“I started climbing originally because I did not have a head for heights,” she says. “It is still a challenge. I am still afraid of heights. I think you have to be – it’s natural.

“This is one of the reasons I want to do it, and how I get something out of it – to look fear in the face. I think it’s something you can get used to. I tell myself to think logically, to concentrate on what I am doing, and then I can manage. It’s dangerous if the fear takes you over. But in a way I live for those feelings.”

The January 2010 ascent of Mount Aconcagua on the border of Chile and Argentina – the highest peak outside of Asia at 6,962 metres – was Carina’s first climb to more than 6,000 metres, an important psychological milestone. She set off for the Everest Base Camp from Kathmandu in Nepal at the end of March. 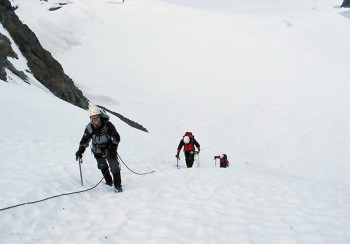 One foot in front of the other: Carina Räihä tells us you need to be mentally and physically strong to make it to the top.© Carina Räihä

The week-long trek to the base camp and preliminary climbs on sections of the route to the summit helped to adapt to the altitude before the main assault on the summit, which she reached on May 17. The whole expedition – officially called Tango Expedition 2010 in reference to Carina’s main sponsors, and organised by a Canadian outfit called Peak Freaks – took some ten weeks from start to finish.

Climbers may endure winds of up to 40 metres a second and temperatures as low as minus 40. The lack of oxygen adds to the difficulty in sleeping after daily climbs of eight or nine hours. Continuous nausea removes appetite, while the purified water tastes unpleasant.

There and back again

The spell in the chillingly titled “Death Zone” above 8,000 metres can only last for a maximum of two days – it’s too dangerous to spend any longer there.

“It has been through my mind how I will feel when I reach the summit,” Räihä muses. “When I reached the top of Aconcagua I felt tired and awful. It was only when I got back to the camp that I felt like I’d really done something. As for Everest, this is something I have always dreamed of, and I’m sure there will be some tears.

“But that’s only half way. Most people who have died on Everest die on the way back. They relax too much – that’s when the accidents happen. But I am not afraid of dying. If it happens – and it won’t – it will be pursuing something I love.”