What’s it like to do military service in Finland? A Finnish woman and a Finnish Nicaraguan man describe their experiences.

Emmie Sumelius (right) stands in formation to swear her military oath, which everyone does at the end of basic training.

Every year thousands of young Finnish men do their mandatory military service or opt for civilian service instead. Each January and July, a total of about 13,000 recruits travel across Finland by road, rail or air in order to reach their designated brigades and begin six to twelve months in the challenging environment of the armed forces.

While service is not compulsory for women, some of them decide to enlist. Emmie Sumelius, a Swedish speaker, comes from the southwestern Finnish city of Turku and is one of the annual 300 to 400 women that complete voluntary military service. Both Sumelius and Tiusanen served at Nyland Brigade, the only unit in Finland where service, education and training are carried out in Swedish, one of Finland’s official languages. 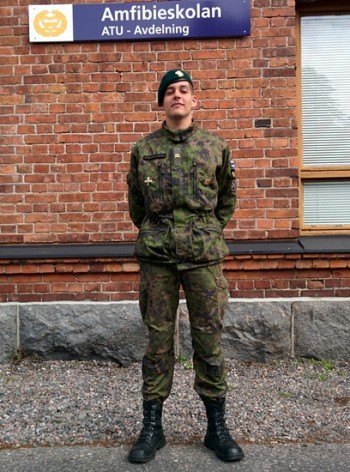 Julio Tiusanen, whose dad is from Finland, found in the Finnish military experience a completely new situation where he could focus on values such as discipline and test his mental and physical limits.Photo courtesy of Julio Tiusanen

Tiusanen graduated from Ave Maria University in Nicaragua with a degree in business administration prior to moving across the pond and actually visiting Finland – his father’s home country – for the first time. The decision to serve in the Finnish military felt natural to him because of his father’s experience of tackling a completely new situation where you could focus on values such as discipline and test your mental and physical limits.

Sumelius decided to volunteer in order to further develop her leadership skills. The challenges did not daunt her, as she enjoys working in a team. The discipline and the organisation also interested her, and she is now on a contract working as a second lieutenant teaching new recruits the very things she learned when she first arrived.

The Finnish Defence Forces (FDF) are not directly perceived as an educational institution, yet they offer a wide range of learning experiences. The Army, Navy and Air Force all contain a wide range of Special Forces, branches and institutions. Some conscripts have the opportunity to serve in capacities compatible with their education and work experience: chefs, physicians, lawyers, electricians, mechanics and others. For those who have not yet found their professional calling, the FDF assigns suitable duties based on tests, evaluations and an interview.

The most motivated and suitable conscripts are chosen for leadership training, either for a rank as a non-commissioned officer (NCO), or a commissioned officer in the reserves. Sumelius was selected for the Reserve Officers School while Tiusanen went to NCO School, as well as receiving special training in crisis management. Both Sumelius and Tiusanen were trained and practised leadership for ten months during their service. 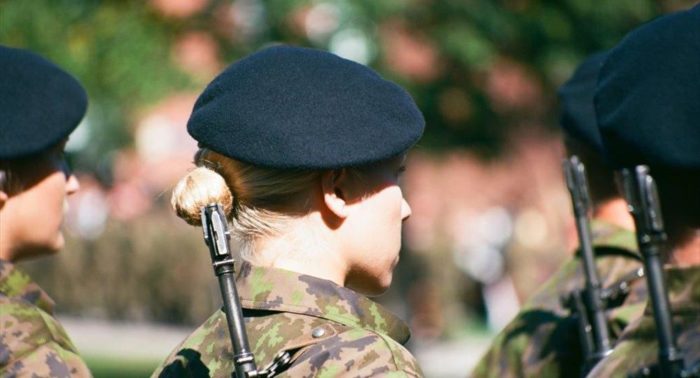 Different branches of the Finnish Defence Forces use different colours of berets. Pictured here is the dark blue beret of the Navy.Photo: Marina Pettersson

Tiusanen and Sumelius appreciate the training they have received, but they put the most emphasis on how their personalities have changed for the better. Sumelius explained: “I’m more confident, more focused, mentally stronger and I have 1,000 amazing experiences and memories – and some not-so-pleasant ones.”

The sometimes harsh environment and complete exhaustion made them appreciate their friends and family and the small things in life. “I learned how to deal with different types of personalities and a different culture,” Tiusanen says. “On a deeper level, it made me realise I was stronger than I thought. No matter how difficult or distant it seems, with enough effort and determination you can achieve anything.”

For Tiusanen and Sumelius, the most memorable events happened during the most challenging situations: the 70-kilometre Green Beret March for Tiusanen, and the almost identical Leadership Exercise for Sumelius. The latter measures leadership skills and stamina, and forms the toughest march in the Reserve Officers School.

However, the best memories will always be the friends they shared their experiences with. “You meet a lot of new people from completely different backgrounds and make new friends and establish bonds that will last a lifetime,” Tiusanen says.

Do they have any regrets about their voluntary service? “Not really,” says Sumelius. “Although I had doubts many times during the service, the hard times were all worth it in the end.”

“Absolutely nothing,” says Tiusanen. “I think it was one of the most rewarding experiences of my life.”