Finnish families get into the Flow Festival spirit

Family Sunday represents a literal growth area for Helsinki’s renowned Flow Festival. After all, these little kids are the music fans of tomorrow.

The sun is shining as trendy parents push prams past a former power station on the grounds of Flow Festival, a multigenre, three-day event with almost 150 music acts appearing on eight different stages.

Children are running around, laughing, dancing and listening to music. They look like miniature versions of the adult festivalgoers, except that many of them are wearing noise-cancelling earmuffs and holding balloons. More kids than adults are wearing rubber boots and caps. Some kids even sport outfits that match those of their parents.

Family Sunday at Flow Festival in Helsinki is in full swing. Kids and their parents are hanging out and enjoying the events.

Adults with festival tickets can bring children who are ten years old or younger to Flow on Sunday from 1 pm to 5 pm. Aimed at preschoolers, the offerings include a disco, a textile art workshop, enormous soap bubbles, hair braiding, skateboard lessons, glittery makeup, kids’ yoga, movies and DJs. 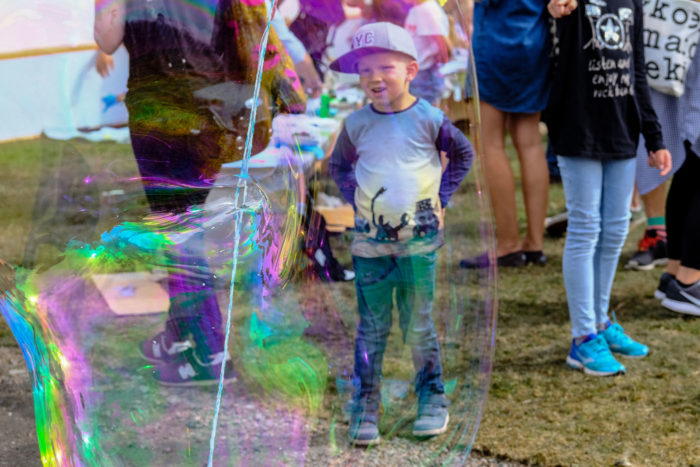 Flow Festival Family Sunday began in 2009 with children’s concerts and DJs, and the programme has expanded over the years to include workshops like this one, where children could make gigantic soap bubbles.Photo: Tim Bird

The Flow family programme started in 2009, when the organisers themselves and their friends started having kids. “We wanted to give festival regulars an opportunity to bring their kids here on Sunday,” Flow Festival managing director Suvi Kallio says. “It was only a small addition to the programme. And when you bring the kids with you [for the afternoon], you only need to find a babysitter for the evening.”

At first Family Sunday just included bands and DJs playing children’s music at the outside venue Backyard, but it has expanded over the years, with approximately 500 children attending (Flow’s total attendance for the whole weekend was 84,000 in 2018). According to Kallio, the Skidit Mega Disko [skidit means “kids” in Finnish], which debuted in 2017, is one of the children’s favourites.

Afternoon disco for kids and adults 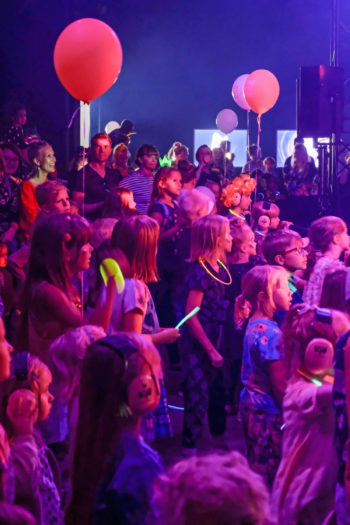 Skidit Mega Disko is popular with kids and parents. The disco takes place in a former boiler hall.Photo: Tim Bird

The renowned Finnish DJ Orkidea is playing cheerful tunes in a 1,000-square-metre former boiler hall. Spotlights illuminate entertainers dressed up as characters from children’s stories. Parking space for strollers is located in one corner, and couches for children – and their tired parents – in another.

There seem to be almost as many adults as kids on the dancefloor. The Skidit Mega Disko really is popular, as is the other dance event at Backyard, where DJs are playing more traditional children’s music.

Oliver and Verner, three and five years old at the time of writing, are at Flow Family Sunday with their dad and mom, Visa and Johanna, for the second time. “Festivals are a part of Finnish summer culture, and we thought it would be nice for the kids to experience this atmosphere, especially since there is a special programme for them,” says Visa.

The boys’ favourite isn’t actually part of the kids’ programme, though. It’s the concert of the Finnish R&B artist Stig Dogg. After the Skidit Mega Disko the boys head home with their grandmother, while the parents stay to enjoy the rest of the festival. 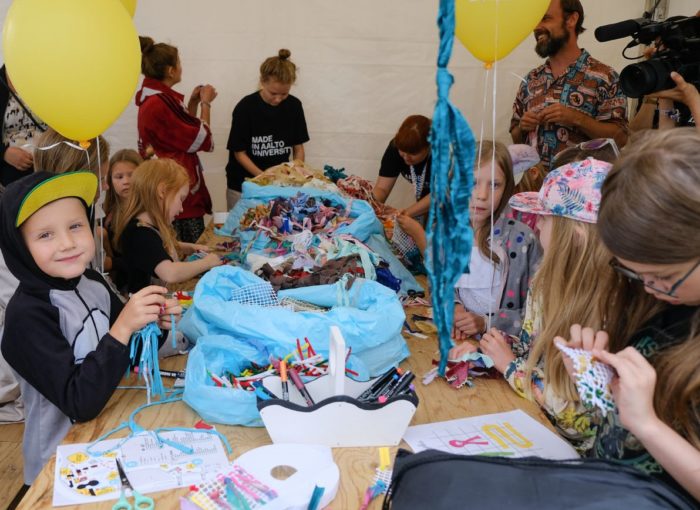 Kids at Flow Festival take part in a textile art workshop organised by Aalto University. The separate patches from the workshop were later combined into a large communal artwork.Photo: Tim Bird

Ksenia came to Family Sunday with her kids Sofia, 8, and Tigran, 6, and one of their friends. They took part in a textile art workshop organised by Aalto University. Ksenia says she’s been coming to Flow Festival for years, but this is her first time there with the kids. “Our kids have always been curious about it, and they’ve seen the festival grounds from outside, so it was nice to finally show them what it’s about,” she says.

Family Sunday takes place before the evening influx of festivalgoers. “Of course music is the most interesting thing at Flow, but it’s also fun to wander around the festival grounds when it’s not so crowded, says Ksenia. “And there are lots of interesting workshops here, so the kids can actually learn something new.”

Sofia adds her opinion to the mix: “I liked blowing soap bubbles and doing the patchwork art, but I also want to get something to eat.”

Music, dancing, ice cream and the skatepark seemed to be the kids’ favourites. Skateboard lessons had to be discontinued after a brief rain shower passed over the festival, because the ground was too slippery, but the children didn’t seem to mind too much. They enjoyed running around the area, even without skateboards.

It’s also worth noting that, while Flow welcomes children on Family Sunday, at least three Finnish festivals provide free entrance for music fans on the other end of the age spectrum: Ilosaarirock in the eastern city of Joensuu and Tuska Open Air Heavy Metal in Helsinki (for those over 65 years old), and Ruisrock in the southwestern city of Turku (over 70).

Flow Festival is known for more than music; it’s also about food – and there’s also plenty for vegetarians to enjoy. But you don’t have to wait for the festival weekend, since almost all the dishes we sample here are on offer all year round in Helsinki.

Five famous Finns reveal their festival faves. During the summer months in Finland, you can visit a different festival almost every day, and the events calendar continues into the autumn and beyond.

The miracle of summer makes winter a distant memory

We propose a toast to the joys of Finnish summer, which arrives like a miracle after the long, dark Nordic winter.

January 23, 2022 is election day for a completely new category of election, anticipating the reform of social and health services that takes effect on January 1, 2023. Foreign residents of Finland have the right to vote and to run as candidates.