Above the Arctic circle and even further north, Sodankylä gathers film lovers from all around the world every summer.

The Midnight Sun Film Festival, held in Sodankylä, Finnish Lapland each June, is an event that all film lovers should experience in their lifetime. Francis Ford Coppola, Milos Forman, D.A. Pennebaker and many others have included it in their itineraries.

The festival brings filmmakers and discerning movie fans from all over the world to Sodankylä in the Finnish far north to watch films day and night while the magical midnight sun circles the sky. The screenings, morning discussions, concerts and other festival events gathered a total of 28,000 visitors in 2018. (The 30th-anniversary edition in 2015 set the record, with an attendance of 30,000.)

Window to the roots of Finland 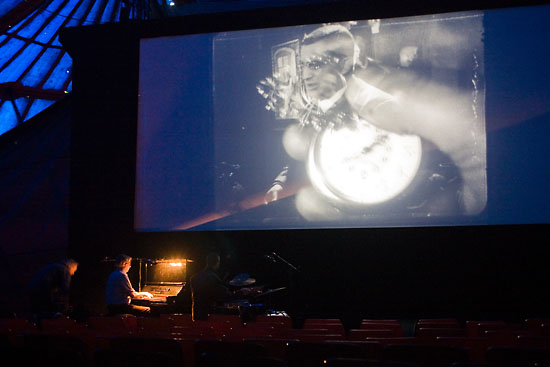 The Festival program is always innovative, even surprising, a mix of old classics and rising stars.Photo: Maiju Saari

The Festival has been drawing crowds since 1986. What is the magic behind the success? It all starts with the Festival program: always innovative, even surprising, a mix of old classics and rising stars. According to project manager Ari Lehtola, this is thanks to the artistic ambitions and high quality criteria of the four professionals who choose the films and invite the special guests: Peter von Bagh, internationally acclaimed director Aki Kaurismäki, Mika Kaurismäki and Timo Malmi.

Then there’s that inimitable Sodankylä spirit, the unique atmosphere that charms everyone. Lehtola says that the festival concept was not planned – it came naturally. “This festival is all about love for the cinema. The spirit we try to grasp and communicate comes mainly from the way Mr Aki Kaurismäki tells stories.”

The festival organisation wants to maintain the romantic, nostalgically Finnish atmosphere of the Festival. “We try to create a window to the roots of Finland,” says Lehtola, “to the golden age of Finnish dancehalls with Olavi Virta and Finnish tango, and the structural changes of the Finnish countryside in the 1950s and ’60s. These sources of inspiration help us create a unique brand and an identity to cherish. Being genuine works, and is a value in itself.” 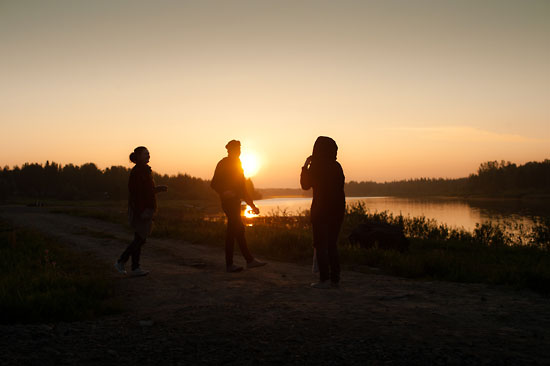 Down to earth and full of midnight sun – this makes a unique festival atmosphere.Photo: Santeri Happonen

For an event this big you need some help. Each year nearly 300 volunteers keep Midnight Sun going strong. Food, accommodation and a free entry to the screenings are provided – plus, you get to know a lot of fun people!

Annu Suvanto, a student from Turku, southwestern Finland, has volunteered five times. “I come back for the films and the people,” she says. “I have made many friends here. Sodankylä is relaxed, free of hierarchies. The staff and the guests mix together quite well. It makes the festival special.”

Non-Finnish speakers can also volunteer. Franziska Zimmermann from Germany and Raquel Uzal from Spain, both students, came to volunteer as cleaners. “The best thing here is that they show films 24 hours a day,” says Zimmermann. “You can go to a screening whenever you want.” Uzal agrees: “You meet other international people who are crazy enough to come up here to work as cleaners!”

For many festival goers the journey to Sodankylä is an essential part of the festival experience. Emilia Rüf, a student from Helsinki, has travelled with five of her friends in a 40-year-old Volkswagen minibus for three days and nearly 1,200 kilometres. “It goes only 80 kilometres per hour so we took the smaller roads. We came here the same way last year, probably next year as well.”

Rüf attends the Festival because it’s so down to earth and full of midnight-sun exoticness. “You lose track of time because you watch films around the clock. This is a perfect place for film fans!”