The meeting of east and west in Finland has been a source of wealth for this country’s culinary culture. Ever since the Middle Ages novelties from the west have come to Finland via Sweden, and from the east originally from Novgorod; indeed some have arrived directly from Stockholm and St. Petersburg. For example, the Finnish cold buffet has been influenced by both the Swedish smörgåsbord and the Russian zakuska table. In the early twentieth century, Finnish, German, Swedish and Russian master chefs worked in the kitchens of Finnish restaurants creating food according to the precepts of French cuisine. 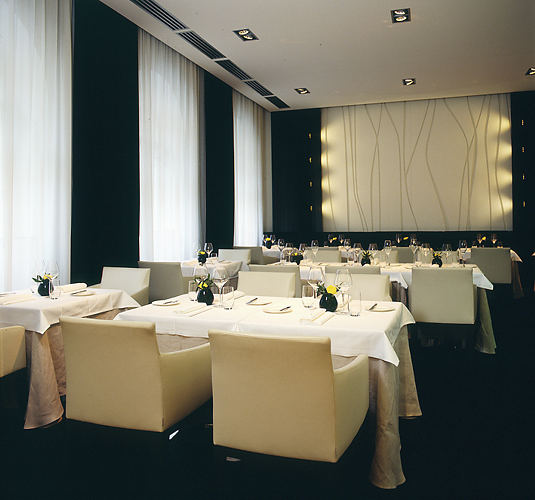 Today gastronomic experiences, inspiration and new ideas are taken from all over the world and then combined and applied to create a truly original Finnish cuisine. The six Michelin stars that have been awarded to four restaurants in Helsinki (Chez Dominique, Demo, Carma and Postres) are an indication of the high quality of restaurants in the capital, the excellence of their personnel and the professional success of their head chefs.

Fish, game, forest mushrooms and wild berries – pure ingredients with striking flavours – form the basis of Finnish gastronomic culture, and the four seasons, each with its own food varieties, bring their own contributions. Burbot stew in the middle of winter, blinis and burbot roe at Shrovetide, mämmi (a pudding made from rye flour and malt) and roast lamb at Easter, new potatoes and herring at Midsummer, crayfish in August, game in Autumn and ham at Christmas – each of these dishes tastes best when eaten at just the “right time”.

Plenitude from fresh water and the sea

Fresh fish is available all year round, and it is prepared in a variety of ways. The old recipe for salting – two handfuls of fish and one of salt – seems rather extreme in modern cooking, in which salmon, whitefish and perch are marinated and flavoured only lightly. Steamed zander served with spinach, a timbale of smoked perch with a chervil sauce and pumpkin flower stuffed with minced salmon, and Baltic herrings on a bed of lettuce with French white wine are some of the finest piscine delicacies. In Finnish restaurants, zander, a freshwater pikeperch, is used in many of the classic dishes. It is said that fish that live in cold water taste best. 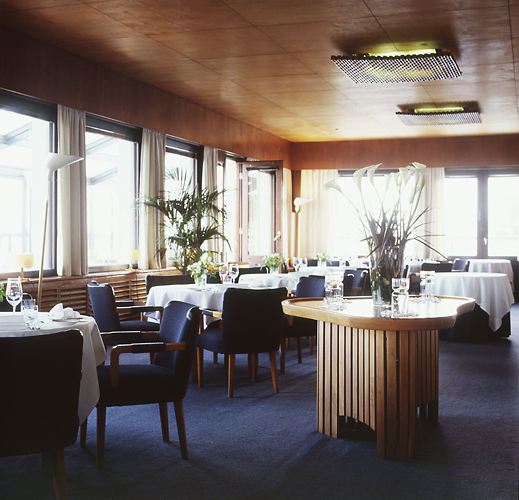 The 1930s décor of the Savoy Restaurant in Helsinki (interior design by Alvar Aalto).Photo: Katja Hagelstam

Reindeer, elk and wildfowl offer excellent and highly appreciated foods. Reindeer hash, made from strips of frozen reindeer meat served with mashed potatoes and lingonberry relish, is one of the best-known reindeer dishes. Cold beer makes a suitable accompaniment for this simple, wholesome fare, while reindeer bundles stuffed with mushrooms and blue cheese are best accompanied with French red wine. Modern executive kitchens serve elk filet stuffed with spinach, apricots and goat cheddar cheese, flavoured with balsamic syrup and topped with Soignon goat’s cheese. The filet is served with sweet potato, Portabella mushrooms, baby fenugreeks and elk sauce. Broiled wildfowl such as ptarmigan and pheasant are seasoned in the homely old-fashioned way with just salt and white pepper.

Mushrooms from the forest

Wild mushrooms go well with both meat and fish. The mushroom season starts in the spring with morels, which are used in soups and stews. The first ceps and chanterelles come out after Midsummer. A warm chanterelle salad, grilled whitefish with a crayfish sauce and a berry tart make a splendid late summer meal. The popular food culture of eastern Finland included russulas, milkcaps and nearly all other edible fungi. In the manors and vicarages of western Finland, on the other hand, only ceps and chanterelles were eaten. 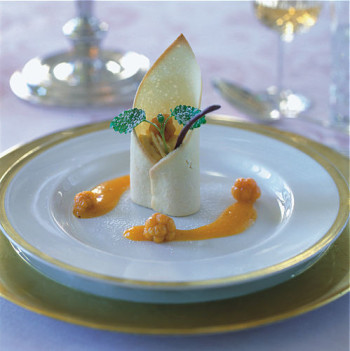 Finnish berries – strawberries, bilberries, raspberries, lingonberries, cranberries, cloudberries, sea buckthorn and arctic brambleberries – are mostly aromatic wild varieties. They are excellent in cold puddings, parfaits and ice cream. Indeed, cranberries, sea buckthorn, arctic brambleberries and cloudberries served with ice cream and a liqueur are typical items on the dessert menus of executive restaurants. A delicious cloudberry whip is served with fresh cloudberries and a sauce made with cloudberry liqueur. Frozen redcurrants with a hot butterscotch sauce provide an ideal dessert to follow a main course of reindeer meat. Berries also make excellent garnishes for meat and game dishes. The homely Finnish dish of liver casserole is served with melted butter and a relish of puréed lingonberries. Filet of reindeer is served with morels and cranberries or with a creamy sauce flavoured with lingonberries, and blackcurrant jelly is used to flavour reindeer sauce.

Ice cream has maintained its place as the queen of desserts for a couple of centuries now, although tastes have changed. A hundred years ago, people favoured ice cream flavoured with fresh pineapple, almonds, chestnuts and other nuts. Ice cream with foreign canned fruits and chocolate sauce was regarded as a delicacy in the 1950s. In the present century, wild strawberry ice cream with a garnish of puréed wild strawberries is typically served as a dessert at lunch. The purée of wild strawberries is flavoured with strawberry liqueur and Koskenkorva vodka. Crème caramel is served with vanilla ice cream, and a chocolate flan is accompanied by blackcurrant ice cream, blackcurrant sauce and coffee ice cream sweetened with coffee syrup. Pastries, often made from wheat bread or crumble, tarts and pies are sweets that can also be enjoyed with coffee.

Crayfish – pride of the north 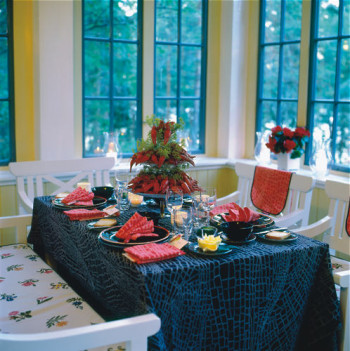 The crayfish parties of late summer evenings are an integral part of Finnish culinary culture. In the old days the crayfish was the main item, and these gatherings reached a climax when hundreds of carefully boiled and chilled crayfish accompanied by bottles of ice-cold schnapps were carried to the table, wafting an aroma of dill. Since those days, crayfish parties have become lighter. Today lake crayfish are eaten as a starter, followed by a main course of fowl, for example mallard, and wild berries as a dessert. Crayfish butter and crayfish tails are still used in restaurants all year round. Lake crayfish tails flambéd with cognac, crayfish butter and chopped dill are used to give a final touch to the flavour of crayfish soup.

Until the mid-nineteenth century, the fare of the common people consisted largely of cereals, fish and milk products; in other words, bread, porridge, salted fish and buttermilk. The meeting of eastern and western cultures is still apparent in the dietary traditions of ordinary folk in Finland. The border between the two is usually drawn by a line running from the Kymijoki river in the south-east to the town of Oulu on the northern coast of the Gulf of Bothnia. Northern Finland belongs to both the east and the west according to what aspects of folk culture are taken as criteria. In western Finland, people ate hard rye bread, in the east soft rye bread, and in northern Finland unleavened bread and barley bread. The buttermilk drunk in the western parts of the country was elastic and smooth, while in the east it was thick and clotted. Previously, cheeses and sausages were only made in western Finland. The traditional leipäjuusto (bread cheese) of northern Finland and Lapland is a round fresh cheese baked over an open fire. It is sliced up, and in the Lappish tradition dunked in coffee to soften it. The softened pieces of cheese are then spooned into the mouth. Doused with cream and served with cloudberries, this cheese is also a typical Finnish dessert.

The writer is the Director of the Hotel and Restaurant Museum.

This article is based on the book The Best Kitchen in Town, published by the Finnish Literature Society in 2007