Irja Askola, bishop of Helsinki and Finland’s first female bishop, opens the Evangelical Lutheran Church’s doors to dialogue with everyone in the surrounding community.

The way Finns feel about the Church is changing faster than ever, as is the Church’s position in the community. A generation ago, 90 percent of the Finnish population held membership in the Evangelical Lutheran Church, whereas now the number has shrunk to about 75 percent and is falling by about one percentage point annually. Ties between Church and State have also decreased.

“Church membership no longer forms a social norm,” says Irja Askola, bishop of Helsinki. “Nowadays it’s more of a personal choice. Nor does the Church wield unquestioned authority anymore. This gives rise to a challenge – the institution must become a living community – and that’s a good development.”

While the role of the Church as an institution has weakened, its social role has grown. This becomes apparent in the reinforcement and expansion of diaconical work. For instance, the Church represents one of the most important providers of family counselling, and plays a central role in professional crisis work.

The Church gets involved in societal issues. “Our job is not to express opinions about the political questions of the day, but rather to get decision-makers to notice the plight of the weakest members of society,” says Askola.

“We build bridges in the midst of disagreements, and help construct a civilised, safe society. We convey the message that every person has inherent value, even if he or she is unproductive or unsuccessful or has done wrong.”

One topic of conversation in modern Finnish society is that of immigration and xenophobic statements. Askola says that for the Church, multiculturalism doesn’t raise any eyebrows.

“Ecumenically, Finland is a model country, and our dialogue has grown to encompass interfaith aspects. I encourage everyone to approach foreign cultures and religions with an open heart, healthy curiosity and genuine hospitality.”

Askola has suggested that Lutheran parishes could rent facilities, with the exception of the churches themselves, to local Islamic groups and others for events.

“It’s important for the leaders of various religions to get the message out there about what we all have in common: We honour God’s creations in the world and everything that is holy.” 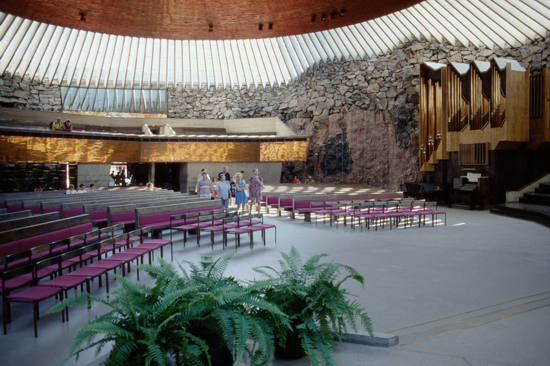 With its hewn bedrock granite interior, Temppeliaukio church in Helsinki forms both a place of worship and a tourist attraction.Photo: Matti Tirri/Helsinki Picture Bank

Askola was consecrated Finland’s first female bishop in the autumn of 2010. Her election was a sign of change in itself. Female priests were first allowed in the Church of Finland in 1986 after a long, drawn-out struggle, and the position of bishop was opened to women five years later.

Forty percent of all priests are currently women, and female priests are accepted by all except a small – though loud and tenacious – minority.

“I think that the rise of women within the Church has made the Church a topic of increased conversation,” says Askola. “The fact that there is a female bishop has made people curious and given the Church visibility in all kinds of media. It helps make spiritual questions a part of everyday life.”

In recent years the Church has had to grapple with the issue of sexual minorities. In 2002 Finland passed a law allowing same-sex couples to officially register their relationships. The conversation flared up again in the autumn of 2010 on primetime television, when a talkshow guest who was against homosexual relationships based her rigid beliefs on the Bible. In the following weeks a fervent public conversation raged and tens of thousands of people renounced their church memberships.

“This event showed the Church the power of the media and of social media, and we learned a lot,” says Askola. The bishop, who is known for her liberal views, believes that despite the loss of members, the conversation made the topic more natural, even commonplace.

Church leaders have since decided that priests were allowed to pray with and on behalf of same-sex couples in registered relationships. Askola said that she would like to welcome more same-sex couples for Church blessings, although she would not force any pastor to do so.

A bill legalising same-sex marriage passed the Finnish Parliament in late 2014 and was signed by the President early in 2015.