Finland for the birds

Finnish specialities sought out by birdwatching visitors include hawk owls, with their characteristic mask-like markings.

Keen birdwatchers from around Europe are increasingly flying into Finland to spot rare and exotic birds and then shoot them – with their cameras.

On a misty morning on Iivaara Hill, south of Kuusamo, Finnature guide Antti Peuna picks out a twitter from the chorus of birdsong echoing through the ancient forests. He has recognised the song of the red-flanked bluetail, a beautiful bird of the Siberian taiga found here at the westernmost edge of its range. We stalk and eventually spot the elusive songster, perched on top of a slender spruce tree.

On the way back to Kuusamo, Peuna pulls up by the roadside, opens the window, and plays a CD recording of a male rustic bunting – a rare northern species. Sure enough, a small black, white and brown bird soon appears to challenge its invisible rival. A short walk away we stop to scratch a tree trunk, and a curious Tengmalm’s owl pops its head out of its nest-hole to see who’s about.

Finland has become a leading destination for birdwatching tourism, as the most accessible place to find such exotic species. Expert local guides are willing and able to help visitors track down the birds on their personal wish lists. Guests are typically fetched from their hotels at 3 a.m. to make the most of the early hours when birds are most active. 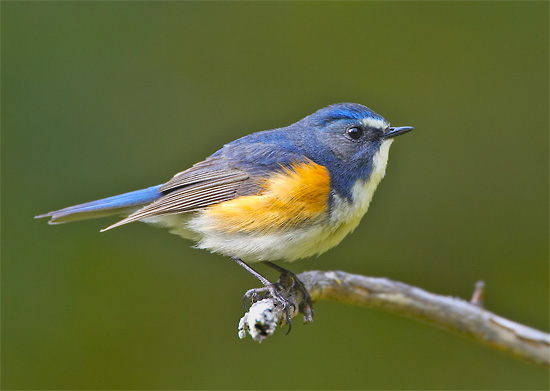 The rare red-flanked bluetail is one of the many exotic species that brings birding tourists to Kuusamo in NE Finland.© Jari Peltomäki / Finnature 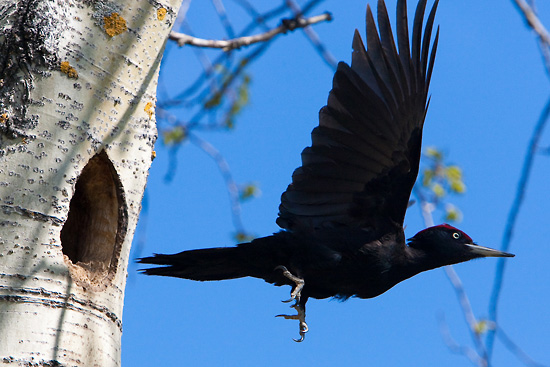 “We came to Kuusamo and Oulu with 16 target species and have managed to see all of them with the help of the excellent Finnature guides, so it’s been a perfect trip,” says British birdwatcher Craig Fulcher. “The highlight was seeing my first hawk owl, but we were also pleased to see Siberian jays, Siberian tits, woodpeckers and all four Finnish forest grouse species. Altogether it’s been a very enjoyable way to see this lovely country and meet local people.”

Several thousand visitors a year flock to Kuusamo for its feathered attractions, including rare woodpeckers, grouses and owls. “Kuusamo has 80-90% of Finland’s key species for birding tourists, as here the ranges of arctic birds and birds of the eastern taiga overlap with those of southerly species,” explains birdwatching guide Olli Lamminsalo. 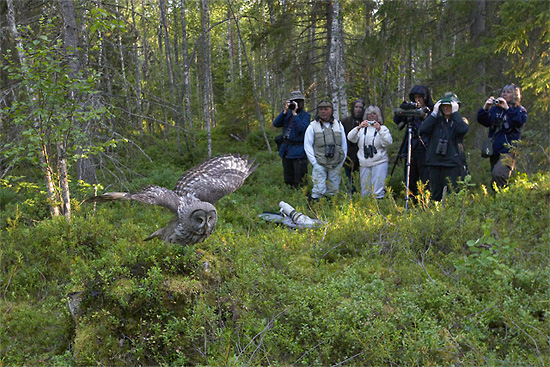 Birdwatchers from around Europe regularly flock to Finland to enjoy encounters with exotic birds such as great grey owls.© Jari Peltomäki / Finnature

The highlight of the year for many Finnish birdwatchers is the Kuusamo Bird Marathon. On 11th-12th June more than 120 keen birders will tour the fields, forests and fells of Kuusamo aiming to spot as many species as possible in 24 hours. In the parallel car-free “Eco-race” teams must use bicycles and canoes to reach the haunts of rare birds.

The national organisation BirdLife Finland also regularly runs birdwatching events. In this year’s “Battle of the Towers” on May 8th more than 300 teams occupied birdwatching towers around the country at dawn, trying to spy as many birds as possible by lunchtime. The winning team from Kristiinankaupunki identified an impressive 107 species in just 8 hours.