Campaign advertisements sprout up in Helsinki and all over Finland on cue, one month before election day.

During an election year in Finland, there’s a sense of expectation, a feeling that a momentous day is approaching.

When municipal elections are held, as opposed to parliamentary or presidential elections, foreign residents of Finland have the right to vote and to run for office. They can participate and anticipate wholeheartedly along with everyone else.

Usually the big day is the third Sunday in April. There might still be some snow on the ground, but there’s also a vague promise of spring’s arrival, in people’s imaginations if not in the air.

The big day was a long time coming in 2021, as municipal elections originally slated for April 19 were rescheduled when a temporary rise in Covid-19 cases caused officials to reconsider. It was an abundance-of-caution situation.

A new date was set: June 13, 2021. It feels somewhat unusual to have an election when the trees are full of leaves and the parks are full of flowers. Campaign advertisements sprouted up at the appointed time, one month prior to election day. Limiting the advertising period helps keep everyone focused. 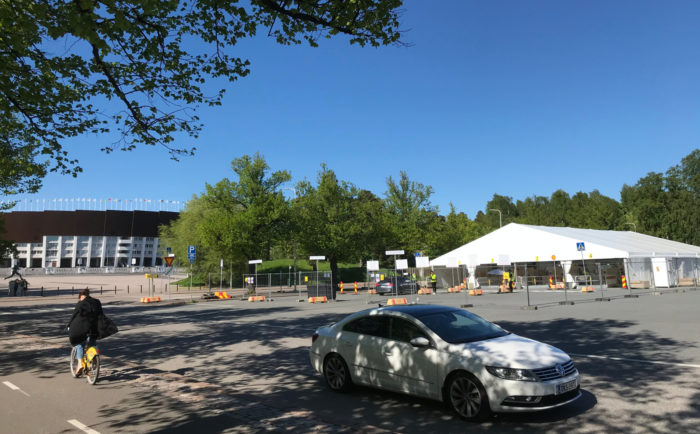 One outdoor location for drive-through, bike-through and walk-through voting occupied a corner of the parking lot beside Helsinki’s Olympic Stadium (visible in the background at left).Photo: Peter Marten

Election season in Finland begins with a notification from the Digital and Population Services Agency. Every eligible voter receives one automatically – either a paper letter or, if you’ve signed up for it, a digital version. Finnish, Nordic and EU citizens are eligible if they are 18 or older and have been living in Finland for at least 51 days prior to the election. For other foreigners, the residency requirement is two years and 51 days. Election info is also available online in 31 different languages.

The letter from the Digital and Population Services Agency shows your local polling place for voting on election day. It also lists multiple locations for early voting, starting three weeks in advance. That’s handy if you have to work on the official election day, or attend your kids’ soccer game, or – now that elections are in June – just want go to the beach. In 2021, there are even covered outdoor pavilions for walk-through, drive-through and bike-through early voting, for people who wish to avoid enclosed spaces or just want to try something new.

As the letter explains, municipal elections serve to choose councillors for the municipal council, the local government. It’s a chance for voters to affect decision-making close to home: schools, parks, local services, local taxes. The size of the council corresponds to the population of the municipality. A town or area of 5,000 people or less will have a council of 13 people, while a city of 500,000 or more will have 79 councillors.

Nationwide in 2021, voters are electing approximately 9,000 councillors in 293 municipalities (the autonomous archipelago of Åland, with 16 municipalities, is not holding municipal elections in 2021). The number of candidates totals 35,627. 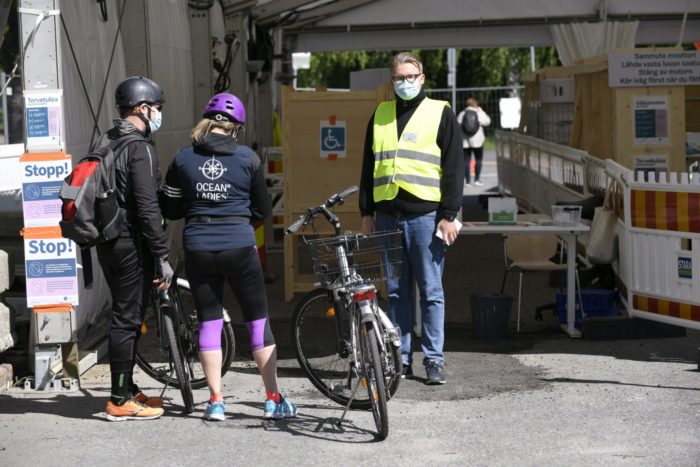 Two voters have pedalled up to the outdoor polling location in the Helsinki neighbourhood of Töölö.Photo: Markku Ulander/Lehtikuva

This has nothing to do with actually casting your vote – while Finland is in many ways a trailblazer in digitalisation, the country doesn’t use voting machines. You look up your candidate’s number on a list and write that number on a paper ballot, then put it into a sealed box. Nobody is going to hack that.

An “election machine” is an online interface that lets you compare and contrast your views with those of the parties and candidates. Various media outlets set them up, including Helsingin Sanomat, the country’s largest daily, and the national broadcasting company Yle, which calls it the Election Compass and makes it available in English and Russian as well as Finland’s official languages Finnish, Swedish and Sámi (spoken by the indigenous Sámi people, whose homeland is in the north).

You answer, anonymously, a couple dozen questions about topics such as climate, health, education, money and transport. Should schools have at least one vegetarian lunch day a week? Should the highest earners pay more municipal tax? Should the voting age be lowered from 18 to 16 for municipal elections? Should more parkland be zoned for construction?

When you’re done, the computer gives you a list of the candidates and parties who share your views. You can click on them to find out more about their standpoints and to see how they themselves answered the questions.

Election machines have been a feature of Finnish media for a couple decades, so it would be wrong to compare them to dating apps. The best versions can help you narrow the field as you consider your choices. That’s especially useful in municipal elections; at this grassroots level, there’s a greater number candidates, many of them unfamiliar.

From election to election, candidates, parties and media outlets are increasingly realising that voters would like to see coverage in multiple languages – and the number of candidates capable of conversing about the issues in other languages is also increasing. Yle runs election discussion shows in not only the official languages Finnish, Swedish and Sámi, but also in English and Russian.

Yle’s All Points North podcast can also be an English-language resource if you’re trying to figure out which candidate you support. It publishes a series of interviews with party leaders as elections approach.

And after you vote, don’t forget that an informal but popular Finnish custom says that it’s time for coffee.

In a very close election, the Social Democratic Party won the most seats in Parliament – but only just.