Concern for a precious sea

With a catchment area spanning nine countries, the Baltic Sea is becoming overloaded.

In late summer the water lapping the shores of the Baltic is warm. Children would like to go swimming but their mothers often have to stop them. The reason for this is apparent to the naked eye. Cruise passengers approaching Helsinki can see it. The water is cloudy and greyish-green, and there are great rafts of blue-green algae floating on top. Many types of blue-green algae are dangerous to humans, as the toxins they secrete damage the nervous system and liver.

The state of the Baltic Sea has caused all parties at the national, international and NGO level to take resolute action. Wastewater is being cleaned more thoroughly; attention is being paid to discharges from agriculture and to pollution caused by transportation. Consumers are more aware of the effect of their choices. So there is a light flickering at the end of the tunnel, and perhaps one day our grandchildren will be able to swim in clean water on a warm August evening. Reports by marine biologists on what is going on below the surface tell us that the Baltic is in need of urgent aid. In the Gulf of Finland, the seabed is in many places completely dead. There is no oxygen in the water and no living organisms of any kind at the bottom of the sea. In fact the Baltic is the most polluted sea in the world. Nine industrialized nations border on it; thus there are big cities and intensive agriculture putting a heavy load on the water. Moreover, the natural conditions and shape of this sea make it extremely vulnerable. It is a shallow basin in which the water is rarely replaced. Any nutrients and poisons that find their way into the Baltic stay there.

A shallow sea overloaded by man

The Baltic is a small sea that lies to the north and east of the Straits of Denmark. Its average depth is only 55 metres, and even its deepest point is only 450 metres. The average depth of the Atlantic, by comparison, is two kilometres. The water in the Baltic is far less salty than Atlantic water, because the former gets surges of oxygen-rich saline water through the Straits only occasionally. A large number of rivers empty into the Baltic, and their estuaries are practically salt-free. The catchment area of the Baltic — the area from which river water flows, and with it nutrients and other pollutants — is four times the size of the sea itself. It comprises the three Baltic states and the whole of Poland, almost the whole of Finland and Sweden, and substantial parts of Denmark, northwest Russia and Belarus. Some 85-90 million people live in the catchment area, and there is a lot of heavy industry and intensive agriculture. The Baltic also carries a large amount of shipping. The load imposed on the Baltic by the activities of man is thus wide-ranging and heavy. The heaviest strain on the well-being of the Baltic comes from the untreated wastewater that is released into it. The biggest single polluter is the huge metropolis of St Petersburg. At the present time only a fraction of its wastewater is treated. But the problem is being tackled both by Russian and international action, and major improvements can be expected in the next few years. Finland’s municipal sewage has been treated before release into the Baltic for many decades already. 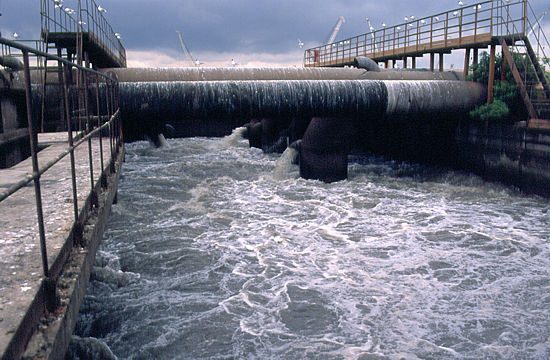 Finland’s biggest challenge is agriculture: artificial fertilizers used in arable farming currently account for over half of all the phosphorus and nitrogen discharges from Finland into the Baltic. Farmers are being persuaded to take action by offers of tied subsidies. If they reduce the amount of fertilizer they use, fewer nutrients get into the sea, they can create buffer zones and wetlands that adsorb them and they can adopt organic farming methods. There is still a lot to do in this respect, though. The growing prosperity of the three Baltic states, Poland and Russia has made farming more intensive there, too. Thus reducing nutrient emissions from artificial fertilizers is a problem for all the countries around the sea.

The year 1974 witnessed the signing of the ‘Helsinki Convention’ on protection of the Baltic, and this was ratified by all the countries around the sea and by the EEC. To put the Convention into effect a special Commission was set up, commonly known as HELCOM. In 1992, the HELCOM countries approved a joint protection programme designed to restore the sea’s ecological equilibrium. Experts identified the 162 worst sources of pollution, or ‘hot spots’, and devised a 20-year investment programme for cleaning them up. A summit meeting every second year works out plans for taking the work forward, and progress is monitored by a Secretariat in Helsinki. In autumn 2007, the aim is to draft an ambitious new Baltic Sea Action Plan to dramatically reduce the Baltic’s pollution level and restore its ecological equilibrium by 2021. A great deal has already been achieved. The nutrient load has been reduced, risks and discharges from shipping have been decreased, and emissions of harmful chemicals into the sea have been restricted. Discharges of DDT, PCB and mercury into the sea have been drastically reduced and in some cases halted altogether, and thanks to this the white-tailed sea eagle and seal populations have started to grow. The International Maritime Organization (IMO) has put the Baltic on its list of PSSAs (Particularly Sensitive Sea Areas). The biggest passenger shipping lines operating on the Baltic have voluntarily undertaken to stop releasing all forms of wastewater into the sea.

The need to protect the Baltic is clear to everyone living along its shores. No wonder, then, that the media and ordinary people make sure that action to protect it is kept in the news. Since 2002, a Baltic Festival has been held every August, gathering musicians from all the Baltic countries in support of the common cause. The Festival was engendered by the concern and love for the Baltic shared by the eminent orchestral conductors Valery Gergiev of Russia and Esa-Pekka Salonen of Finland, and Michael Tydén, director of the Berwaldhallen concert hall in Stockholm. The programme includes high-quality concerts in most Baltic cities and on board passenger ships, as well as discussions and seminars about the state of the sea. The event is arranged in cooperation with the World Wide Fund for Nature, or WWF. The Finnish media keep a close and conscientious eye on the state of the Baltic and are active in other ways, too. At the end of summer 2007, for instance, the Finnish evening paper Ilta-Sanomat, with the WWF, launched a ‘Save the Baltic’ competition in which readers were urged to send in photographs, videos and text messages on the state of the sea. The winning picture and suggestions for ways of improving the condition of the Baltic were presented to Prime Minister Matti Vanhanen. Ordinary citizens have few opportunities to directly affect the state of the Baltic through the choices they make because the pollution comes mostly from communities, agriculture and shipping. But there is something the enlightened consumer can do, namely buy organic food from nearby and favour shipping lines that do not release their wastewater into the sea, and do not tip soapy water directly into the sea. By Salla Korpela, November 2007, updated June 2014