Close encounters with the mighty moose

We visit a Finnish farm where you can pet and feed moose, and then eat a tasty meal of moose meat as well.

Matti-Esko, the oldest moose on the farm, receives a healthy, leafy snack.

A male moose with a fine crown of antlers is an impressive sight. At Moose Manor, Finland’s first and only moose-based tourist attraction, visitors can meet, feed and pet moose before enjoying tasty meals filled with local ingredients – including moose meat.

Bull moose Jorma proudly waves his stately crown of antlers as he eagerly strides over to browse on the leafy branches we offer him in the woodland corral behind Moose Manor. Female moose Annikki is warier, making a mock charge before leading her leggy calf Suvi away to a secluded corner of their enclosure.

“Our three adult moose have all come from zoos, as in Finland it’s illegal to take wild animals into captivity, but our two calves, Laila and Suvi, were born here,” explains Susanna Partio, who set up Moose Manor in 2008 on an old farmstead at Jämsä in central Finland.

Moose Manor is a family business. Susanna, an experienced chef, runs the kitchen, while her son Paavo looks after the animals and guides visitors. 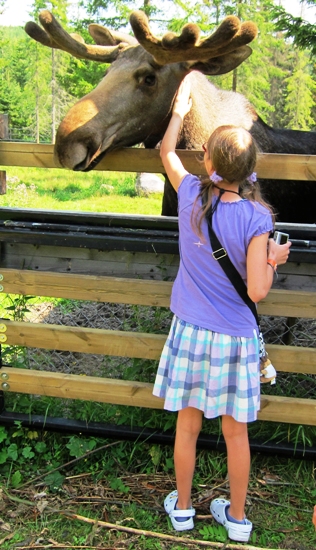 Moose eat up to 40 kilogrammes of food each day. “We’ve made friends among local landowners by clearing their willow thickets to get branches to feed our moose,” says Susanna. “Sometimes we also feed them apples, potatoes or hay to reproduce their natural seasonal diet, and as a result our animals have all stayed healthy.”

Moose can quite easily get used to people, though their limited attention span makes it practically impossible to train them for any useful work. “Looking after moose isn’t too hard though – except in the October rutting season, when the males don’t even eat, and can only think of one thing!” adds Paavo.

The Partios are clearly attached to their unusual “pets,” and keen to explain their distinct personalities to visitors. “Our oldest male, Matti-Esko, escaped a couple of years ago, but he really didn’t know how to behave in the forest with the wild moose. When he eventually came home, tired and skinny, he licked me all over my face,” remembers Susanna.

Moose on the menu

Moose Manor is a popular winter destination for holiday-makers based at the nearby Himos ski resort, including many Russian, Dutch and German visitors. In summer most of the guests are Finnish and Russian tourists. “The chance to see moose close-up is the main attraction, but almost everyone stays to dine in our restaurant too,” says Susanna. 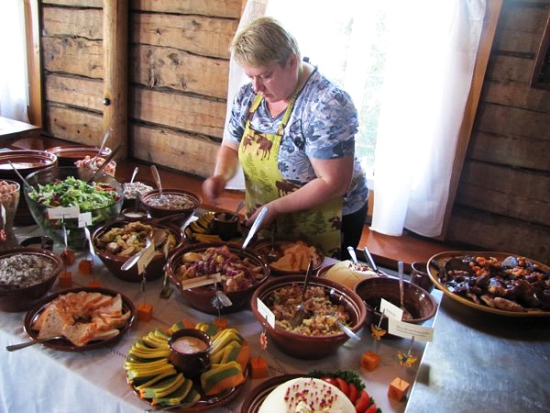 The kitchen serves traditional Finnish fare including locally sourced forest mushrooms, wild berries, woodland herbs and lake fish, as well as moose meat. The latter is supplied fresh by local hunters in the autumn and a supply is kept in the freezer for the rest of the year. “Though our own moose will never be sold as meat, we think it’s natural to eat moose meat, and people should understand where their food comes from,” says Susanna.

After savouring Moose Manor’s braised moose meat with buttery mashed potatoes, lingonberry sauce and pickled cucumbers, we head out to the corral where a young Finnish moose-fanatic, Anni, is lovingly stroking her new friend’s snout. “Matti-Esko is my favourite. He’s so big but very friendly, and his antlers feel so funny with their soft, warm covering,” she says delightedly.

Wild moose on the loose 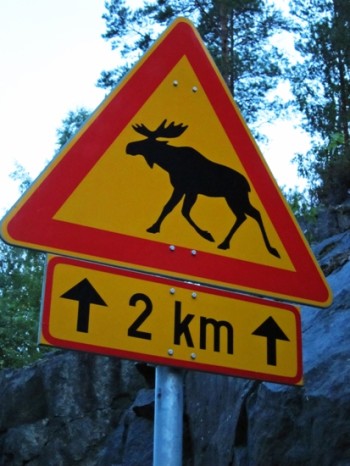 Moose crossing the highway can cause car accidents.Photo: Fran Weaver

• Finland’s moose population numbered almost 100,000 at the end of 2010, according to surveys conducted by the Finnish Game and Fisheries Research Institute. An estimated 60,000 moose calves were born in spring 2011.

• Wolves and other wild predators are scarce in Finland, so moose numbers are purposefully limited through controlled hunting. This helps to reduce traffic accidents and the damage moose cause in commercially managed forests.

• Permits have been granted to enable about 60,000 moose to be hunted in autumn 2011 (the moose-hunting season starts on September 24).

• There are 310,000 registered hunters in Finland. About 100,000 people hunt moose, usually in well-planned groups organised by local hunting clubs.