How a tiny village store in Finnish Lapland grew into a hypermarket powered by clean, renewable energy.

From village store to hypermarket: When Jouni founded a store in his basement in 1950, he could scarcely have imagined how business would grow.

Here’s how one enterprising storekeeper in Lapland is devoting his energy to sustainable development.

If you needed beer or booster cables in the village of Äkäslompolo, near the Ylläs ski resort in Finnish Lapland, Jounin Kauppa (Jouni’s Store) was where you went to find them. Overrun with tourists in winter and sleepy in summer, the shop’s narrow aisles always had shelves piled high with everything you’d expect to find in a general store – and then some.

“A few years ago, we started to notice how we were running out of space,” says 30-something Sampo Kaulanen, the third generation of store managers since the original Jouni opened a small shop in the basement of his home in 1950. Back then, the story goes, there were less than a dozen homes in the village. Now, at the height of ski season, the population swells from 400 to more than 20,000.

Jounin Kauppa has also expanded, into a 5,894-square-metre hypermarket complete with café, liquor store and beauty salon. Where the old shop stood, visitors are now confronted with a shiny new strip of businesses, names illuminating the winter darkness. 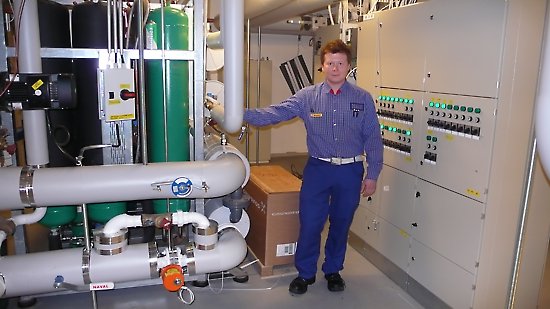 But it’s what you can’t see that makes it remarkable: Jounin Kauppa is the first and only store in Finland with a heating and cooling system that runs entirely on clean, renewable energy. If you’ve ever been to Lapland in the wintertime, you’ll realise that energy accounts for a large part of the cost of operating a business.

“With an architect we were planning how to expand the old shop, but it was impossible because the old building was just so small, and the parking lot too,” says Kaulanen. “So we started to think of a completely new building, and that’s when I got the idea that it should be as high-tech as possible. And it was also that I just like doing things a little differently.”

Pays its own way

Kaulanen studied various heating and cooling systems and ended up with the only building of its kind in the country, using a combination of geothermal energy for heating and lighting and carbon dioxide for cooling refrigerators and freezers. All power sources are managed via one fully integrated system.

During peak times, additional energy is pumped from 15 heat wells drilled into the rock beneath the shop, which also power air conditioning. During off-peak times, surplus energy is stored for later use. This keeps the condensate heat from the cold equipment at a low level and minimises the amount of additional energy that has to be bought from the grid.

The total renovation cost 13.5 million euros, which Kaulanen anticipates will be recouped soon. After that, the next stage is a combination of solar and wind energy to remove the last dependence on fossil fuels, making the building self-sufficient and 100 percent emission free. “This is what I can do for more sustainable development, to help change things. Second, this is an investment that’ll pay for itself in the long run, though it’s quite a bit more expensive to build.”

What do the locals think of this latest claim to fame for Äkäslompolo? “I don’t know,” says Kaulanen. “I guess they’re kind of amazed.”