This dog, named Kössi, is training to become a coronavirus sniffer dog at Helsinki-Vantaa Airport.

Passengers arriving in Finland can take advantage of a test that uses sniffer dogs at Helsinki-Vantaa Airport. As use of the method expands, it might offer a fast and reliable solution for ensuring safe and healthy aviation during the pandemic.

The tests, which started a trial phase in September 2020, are supervised by Anna Hielm-Björkman, a docent at the University of Helsinki’s Faculty of Veterinary Medicine. They form an extension of research into the ability of dogs to identify diseases. There have already been studies of how dogs can be helpful in monitoring or diagnoses by detecting cancer, Alzheimer’s disease and malaria, as well as by discerning E. coli in newborn babies. 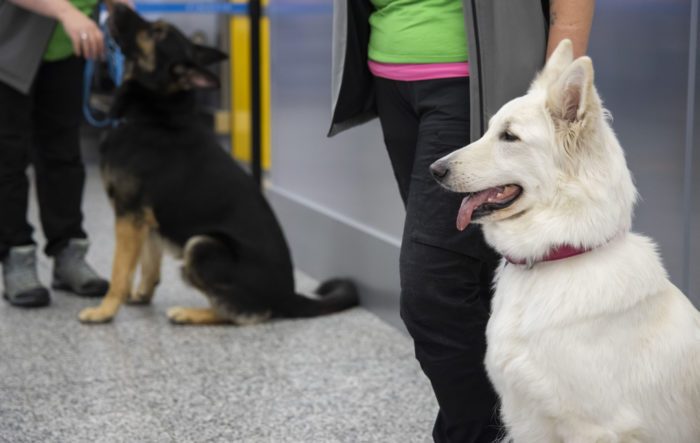 Part of the training for sniffer dogs such as E.T. (right) and Valo (left) includes becoming accustomed to the sights and sounds of Helsinki-Vantaa Airport.Photo: Matti Matikainen/Eyevine/Lehtikuva

Finland is not the only country where “Covidog” trials and research are taking place. Similar interest has been expressed in France, Germany, Iran and the UK, and Dubai was the first airport to employ dogs to help detect the virus.

The Helsinki-Vantaa Airport procedure, which is completely voluntary, takes place on the land side of the arrival hall and involves wiping a sweat sample from the subject’s neck, throat and wrists. If the dog signals that the sample is positive, the subject is then directed to the airport’s PCR (polymerase chain reaction) testing station to have the result confirmed. Nobody with an allergic or religious aversion to dogs needs to be in the same room as the animal. The testing success rate, says Hielm-Björkman, is more than 94 percent, exceeding even PCR test success.

Four dogs trained in biodetection are involved in the trials at Helsinki Airport. Two of them are already prepared for the task in hand, while another two are in environmental training to familiarise them with the airport’s smells, noise and activity. 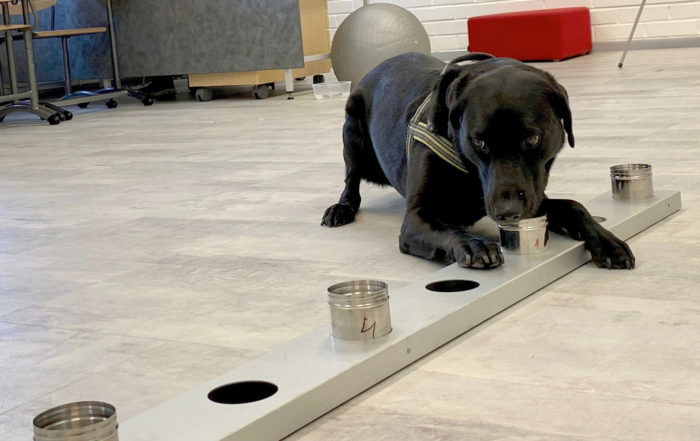 This sniffer dog called Miina is being trained to detect Covid-19.Photo: Attila Cser/Reuters/Lehtikuva

“When we started the Covidog project, we decided to use only dogs that already had some history of sense detection,” says Hielm-Björkman. “This makes their training time relatively short. Our dogs have been trained for many other purposes, including sniffing cancers at our lab, drugs and money at airports and mould in houses. It’s part of a bigger research project, also validating dogs that sniff cancer or [sound the] alarm about chronic pain or hypoglycemia.”

Hielm-Björkman has had inquiries from other airports about the availability of canine resources, including one from Nepal looking for five dogs. “It would be good to have more resources, in terms of dogs and people,” she says. “I would be happy to get dogs to help counteract the decline [brought on by the world coronavirus situation] in tourism in Lapland, for example, and for care homes for the elderly.”

She acknowledges the financial support provided by the City of Vantaa, where the airport is situated, just north of Helsinki, and by the Ministry of Social Affairs and Health. “The responsibility for airport-related health security with respect to infectious diseases rests with the City of Vantaa,” says Timo Aronkytö, deputy mayor responsible for social affairs and health. “The Covidogs are one of several testing measures we have in place. We are supporting the project for four months and will continue it if it is successful.” 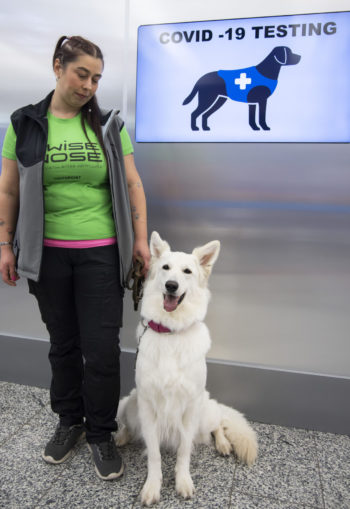 The response from arriving passengers has been good, says Aronkytö. “Most people like dogs, and we are in the middle of a crisis – so it’s something positive. There is definitely potential for extending the tests to harbours and other situations, where the dogs can patrol the passenger areas, as they do for sniffing out drugs, for example. Then health safety would be taken to another level.”

Hielm-Björkman also finds that travellers at Helsinki-Vantaa Airport seem to like the concept: “Many people have said that it’s so nice that human’s best friend is helping us again. On the first day 84 people had the dog test and all were negative. On the second day they detected one positive case out of 71 tests. If you test positive in the dog test, you only have to walk 40 metres to have it confirmed with a PCR test.

“So it’s a perfect situation for research, showing that you get the same result twice in the same location at the same time with the same people. It’s going to be a really nice research paper.”

A cup of coffee and a cuddly cat create a purrfectly fancatstic café catsperience. We visit cat cafés in Tampere and Helsinki and come away with a whole slideshow of cute cat pics.