Vegetarian cooks are helping nontraditional foods compete with ham for a place in Finnish Christmas banquets.

Christmas has the potential to be a compromising time for vegetarians – in most Finnish families the table bears a large cut of ham. Years of work by vegetarian cooks are helping nontraditional foods make inroads into the menu.

While perhaps not eager to consider herself in a grandmotherly role, Tuija Ruuska admits that she must be one of the longest-serving vegetarian cooks in the business in Helsinki – and that probably means all of Finland, too. “But you have to include my partner Hanni Brotherus here in Kasvisbaari for that title. We share the honours in this restaurant.” At the restaurant-cafeteria of the Finnish Academy of Fine Arts, the team serves over 200 meals every day to students and faculty; all dishes are vegetarian.

“The thing that has changed fundamentally in Finland is attitudes towards choice,” Ruuska declares. While even the most conventional restaurants now supply at least one vegetarian option, more committed establishments like Ruuska’s offer only vegetarian fare – and always provide an alternative for vegans, who include dairy products and eggs on the list of things they don’t eat.

For many years Helsinki’s only dedicated vegetarian restaurant, Kasvis, was located near St John’s Church, just south of the city centre. Ruuska and many other budding young restaurateurs passed through the establishment. It definitely had an alternative feel with its simple food and hand-written menus.

Today a wide variety of Finnish and ethnic restaurants all over the city offer daily vegetarian selections. A handful of restaurants specialise in serving a strictly non-meat selection at lunchtime: Zucchini in the heart of Helsinki (Fabianinkatu 4) and Silvoplee in Hakaniemi (Toinen linja 7) both offer Christmas dishes in December.

“Traditional Finnish vegetable casseroles – potato, carrot or turnip – are very heavy and use large quantities of cream and even sugar to pep them up,” she says. “We rely on soy products and careful spicing to bring them alive. But we still serve them alongside normal Finnish Christmas dishes like rosolli (a light beet and vegetable pickle) and the traditional dessert of rice porridge.”

A new way to look at eating 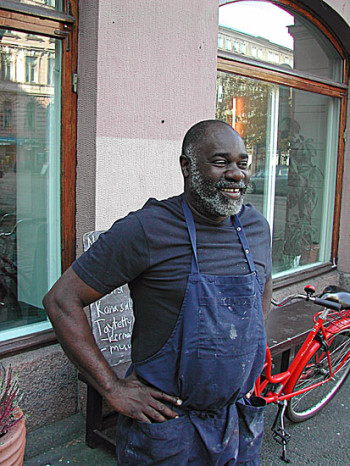 For Lloyd Polack, a Helsinki chef who hails from the West Midlands in the UK and from the Caribbean, Christmas forms a time to be creative and offer more exotic European and Caribbean dishes. After training in the UK, Polack worked in continental hotels and restaurants before settling in Finland. He, too, got his start at Kasvis.

A freelance chef and caterer nowadays, Polack can indulge his creative culinary spirits, both at home and on the job. Leafing through old menus, he points out dishes that remain popular, including vegan banana muffins and ginger carrot and bean paté. “Christmas is a good time to be experimental while following the traditional patterns – people are looking for something special,” he declares.

At home he has learned how to extend his range to include some very local, but not so typical, traditional ingredients. “My mother-in-law is a real forager, so we have always had plenty of Finnish mushrooms, which I had to learn to use at Christmas, too. And I must admit, my sons Pablo and Daniel have been my main guinea pigs!”

Always proud to be known as being “clever with cakes,” Polack sees higher demand for biscuits and sweet desserts at Christmas. For him, it’s not enough to consider ethical and ecological issues only when preparing food – he also delivers by bicycle whenever possible. “With city traffic nowadays it’s often quicker in the centre to deliver by bike, but when the snow comes I leave it at home.”

So if you see delivery cyclist with a red hat wobbling through the streets of Helsinki this holiday season, it’s not Santa Claus. It’s another order of vegetarian Christmas goodies on the way to discerning customers.