After crossing the decorated wooden bridge to the island of Seurasaari, visitors are welcomed by cheerful volunteer elves, and may even catch a glimpse of Santa Claus.

The annual event (held on December 15 in 2019) provides a welcome antidote to today’s increasingly commercialised Christmas.

The volunteer-run Seurasaari Christmas Path is the brainchild of former kindergarten teacher Marjaliisa Kauppinen. “When we organised the first Christmas Path in 1996, the idea was to give a present to the children of Helsinki by re-creating the feeling of old countryside Christmases,” she remembers. “Right from the start we knew the open-air museum island of Seurasaari would be an ideal setting, as it has lots of trees, lovely old buildings transplanted from the countryside – and no cars!”

After crossing the decorated wooden bridge onto the island, families are welcomed by cheerful volunteer elves and forest animals dishing out gingerbread biscuits. 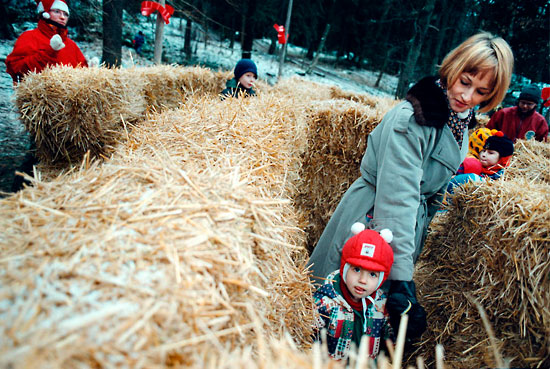 One simple but ever-popular attraction along the Christmas path is a maze made of straw bales. Photo: Sanna Liimatainen

The path leads on to more surprises, including an elves’ adventure trail, a fairy-tale tent and a simple but amazingly fun maze constructed from big bales of straw. “Our idea is to get children out of the shopping centres and let them run around, play games outside and make things for themselves,” says Kauppinen. “We invite them to bring along decorations they’ve made beforehand and hang them in our Christmas trees.”

Another popular activity is a romantic ride through Seurasaari’s forests on a real sleigh drawn by two friendly horses (a cart does the trip if there’s no snow).

In a special Christmas Arena the first Christmas is commemorated with a nativity play, a Christmas gospel and a chance to sing traditional carols with earthbound angels. Generous free portions of Finnish Christmas rice porridge are ladled out for the children (who are asked to bring their own bowls and spoons). Kids are also urged to bring torches so that they can boldly explore Seurasaari’s inviting forests as dusk descends.

One memorable neck of the woods is illuminated by hundreds of candles, creating an atmospheric avenue of light beneath the overhanging branches.

“We’ve aimed to give the whole event a very Finnish feeling, taking pride in our own Christmas customs, and using traditional materials like wood and straw instead of modern plastic decorations,” says Kauppinen. The path is blessedly free of tacky tinsel, flashing fairy lights or sponsors’ advertisements.

“People are really surprised to find that the whole event is absolutely free,” says Kauppinen. “We’ve been delighted to show that you can really do a lot without a big budget when people get inspired by a good idea!” 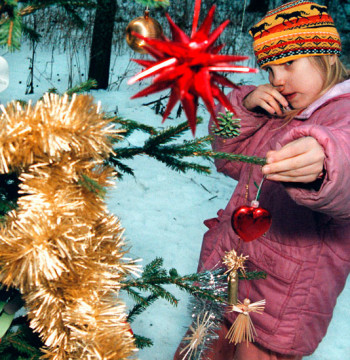 Kids are invited to bring along decorations to hang on the Christmas tree on Seurasaari. Photo: Sanna Liimatainen

Helsinki City Council actively supports the Christmas Path event, and foodstuffs and materials are provided by discreet sponsors, but most work is done by volunteers, including many students and trainee kindergarten teachers. “The joy that this event brings to so many children and their parents is the best possible payback for our work!” says Kauppinen.

Kids leave the island with fresh buns and a gift of a traditional Christmas card. The one-afternoon event typically attracts as many as 15,000 eager visitors, who are encouraged to leave their cars behind and arrive at Seurasaari by bus.

Other Finnish towns are following in Helsinki’s footsteps and setting up similar non-commercial yuletide events. Kauppinen is also proud that many Helsinki families who come back year after year feel that the Christmas Path marks the true beginning of their Christmas season.