On the frontier of human knowledge – Leena Palotie

Genetics researcher Leena Palotie, who we are sad to note passed away on March 11, 2010, had recently been awarded the title of academician, and called her work “a fantastic journey into the human being.”

I want to find out why some part of a human being begins to operate incorrectly, says award-winning genetics researcher Leena Palotie. "At what stage can we prevent and influence that process?"

This past autumn genetics researcher Leena Palotie was awarded the title of academician in Finland for her pioneering, international career. We take a look at the highlights of that career. [Editor’s update: We are sad to note that Leena Palotie passed away on March 11, 2010 after a serious illness. We have not modified the rest of this article, preferring to leave it in the present tense.]

Leena Palotie, professor of medical genetics and molecular medicine at the University of Helsinki and the National Public Health Institute, is a fascinating phenomenon in Finnish science circles. Although she’s one of the top researchers in a field that utilises extensive amounts of sensitive personal information, she is both willing and able to explain her work to the public in an accessible manner.

“Researchers are usually quite careful when they appear in public,” she says. “But I don’t turn down an interview if it has to do with genes. It’s my personal mission. Since society pays for my work, it’s important for people to know more about it. Besides, it’s a lot of fun to talk about these things.”

Palotie, no stranger to publicity, radiates enthusiasm for her work, and joy in its achievements: “I was lucky enough to go to the US in 1978 for my postdoctoral training. The first gene of the human genotype was identified then and there. That wasn’t previously considered possible. The event became a historic turning point in this field.”

Palotie realised that genetic research – particularly disease genes and the human DNA – would be her field. She soon joined a small international research group, the UCLA Human Genetics Genome Center, which held the knowledge of genetic technologies and genotypes.

“I had a chance to be at the frontline of research into a new field from the very beginning. In 2002, when the whole human genome had been identified and was published on the internet, I realised that I had, by chance, joined a fantastic journey into the human being.”

“The more the human being’s biological background, or genome, is understood, the better possibilities we have to influence the progress of diseases and to facilitate their treatment,” Palotie says. “I want to find out why some part of a human being begins to operate incorrectly. At what stage can we prevent and influence that process?”

“In the near future, genetic information will increase the precision of diagnosing various diseases. There are, for instance, several different types of depression. If we could use genetic research to recognise which medicine suits which form of depression, the patient wouldn’t need to test various medicines – the right one could be prescribed immediately. That would be a great relief. 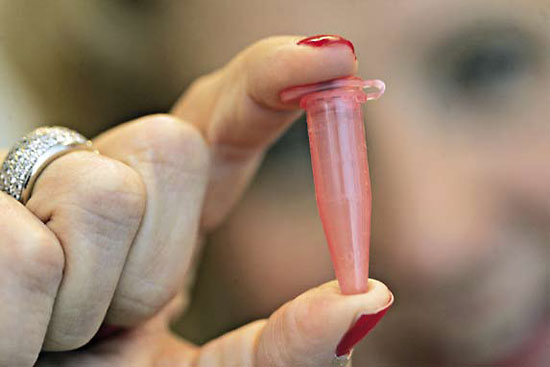 “Genetic research differs in a beautiful way from the rest of medicine, in that there are no previous assumptions about the reasons for diseases.”Photo: Eastpress/Seppo J.J. Sirkka

“In the long run, we’ll be able to produce totally new medicines with genetic research. We must, however, take the time lag into account. It takes almost ten years from a genetic discovery until a new targeted medicine is available.

“Genetic research differs in a beautiful way from the rest of medicine, in that there are no previous assumptions about the reasons for diseases. We don’t need to create a hypothesis based on old information on the changes leading to a heart attack. We can go through our genotype and study what kind of genetic profile creates a risk for a heart attack. We have already discovered totally new mechanisms and metabolic ways with genetics, providing opportunities for developing completely new treatments.

“The next technological leap in the field of genetic research is to be able to find out the genetic risk profiles for various different diseases with one test. I’m convinced that these tests will be used in diagnoses and help with planning treatments for patients.”

One of Palotie’s significant realisations was that it was worth researching Finnish genes in particular in a focused way.

“A long time ago, a small number of people moved to this geographic area. They only brought with them a small selection of the genetic forms of humankind – including disease mutations, which then became more concentrated. Since the population has stayed for hundreds of years in the same region – and even as late as in the early 20th century, people still tended to find their spouses within a four-kilometre radius – the same, homogenous genotype remained in Finland to a large extent.”

“Therefore, it’s been technically easier to find disease genes in Finns than, for instance, in the population of London or Los Angeles. The Finnish population is the best-known in the world when it comes to disease genes. And we are also rapidly discovering the genetic profiles of our most important ‘national diseases’.”

In addition to the clarity of the Finnish population structure, genetic researchers have been aided by the fact that there has been so much reliable information on the Finns collected in archives.

“For a long time, doctors here have kept detailed written accounts of what kinds of diseases their patients have,” Palotie notes.

“In addition, they’ve studied what diseases appear in their patients’ families. A lot of useful information has been recorded in population registries and healthcare files about, for instance, how average height and weight have increased, or how much people have smoked or drunk.

“One of our strengths is our Nordic social system and our good healthcare system. Citizens volunteer to have their information used, since they trust our healthcare system and research. The response to official surveys is usually 75 to 85 percent. A high level of education plays an important role as well. Finns understand what they are being asked.”

So what does Palotie most enjoy about her challenging work? “We’re working on the border of human knowledge. We’re looking for answers to questions that people weren’t able to ask yesterday. It’s incredible to realise that you’ve discovered the cause of a certain disease. Even though no one else knows about it yet, it could be used in diagnostics tomorrow.”