With a new CEO, Nokia charts its course in a world where everyone – and everything – takes part in connectivity.

Nokia’s new CEO, Rajeev Suri, emerges to talk about his vision for the company’s future in “a world where physical objects of all kinds...will have built-in computing power, sensors and connectivity.”

With a new CEO, Nokia plans to continue revolutionising the ways people work and live, even though it has now handed off its mobile phone business to Microsoft. Nokia is envisioning its place in a world where everyone – and everything – takes part in connectivity.

Just west of Helsinki, a new tenant has moved into the landmark building known as Nokia House – the sign on the façade has changed from Nokia to Microsoft. With Nokia’s sale of its handset division complete, the company has quietly moved several kilometres north to their new headquarters in Karakallio. This location is much less visible than the former headquarters, but that doesn’t mean Nokia is planning to keep a low profile.

Nokia’s new CEO Rajeev Suri has been widely lauded for turning its struggling networks division around. The company’s main business unit is Networks, which focusses on providing products and services to telecommunication operators. It has found a good market in fourth-generation Long Term Evolution (4G LTE) technologies and is known as an early leader in virtualisation and in implementing cloud technologies.

Timo Vuori, a professor at Aalto University who has studied strategy processes at Nokia and other companies, thinks Suri is a good choice for CEO, based upon his public image. Vuori also expresses optimism about Nokia’s future in the networks industry.

“I believe they will continue operating successfully in their industry,” Vuori says. “Nokia is strong in networks and there is no reason to think demand would decrease or Nokia fail to deliver.” 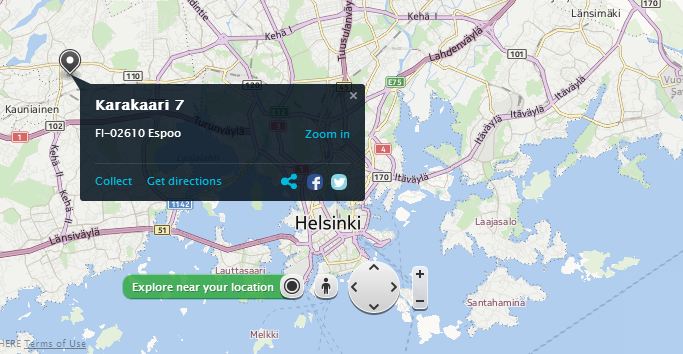 Nokia’s location-based business HERE is pointing out the address of the company’s new headquarters west of Helsinki.Screenshot: here.com

Nokia’s second division is the location-based business HERE. It is deeply immersed in the “internet of things,” where physical objects have network connectivity. In particular, HERE is specialising in smart, connected vehicles and wearable technology.

“I think this is very interesting,” says researcher and journalist Carl-Gustav Lindén, who is currently writing a book about Nokia and the globalisation of Finland. “I think that everybody wants an alternative to Google Maps. The internet of things is the future and robots need to be connected to precise location systems. This is very exciting, actually.”

While the internet of things includes stationary objects, such as connected home appliances or industrial machinery, HERE’s expertise is in mobility. Smart watches and eyeglasses such as Google Glass may come to mind, but HERE could bring its innovations to the public in surprising ways.

“I believe there is huge potential in location-based wearable technologies,” Vuori continues. “The market is still emerging, and great innovators such as Nokia have the possibility to shape the market by being proactive and providing new solutions that one cannot fully imagine yet.”

The third prong of Nokia’s trident of business units is Technologies. This unit primarily manages Nokia’s patents and licenses, but also conducts new research in low-power connected smart multisensor systems and distributed sensing, among other things. 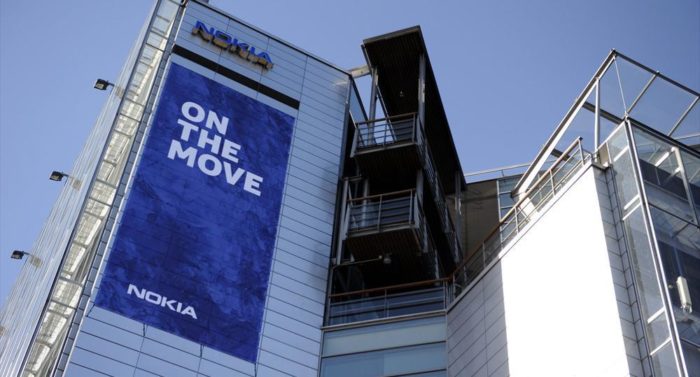 In April 2014, a banner hung on the façade of Nokia House announcing the company’s move. Before the end of the month, Nokia’s logo was replaced with that of Microsoft.Photo: Mikko Stig/Str/Lehtikuva

On the surface Nokia’s three units may not have much in common, but in a conference call Suri explains that the connectivity of everyone and everything will allow synergies to develop. He says that all of the recent changes in technology are leading to something often called “the programmable world.”

“It is a world where physical objects of all kinds – cars, TVs, medical devices, wristbands and more – will have built-in computing power, sensors and connectivity,” Suri says. “These objects will become bound together with intelligence built upon vast amounts of data which is processed in the cloud and used to automate and simplify, to create new services, and to improve peoples’ lives in many areas.”

Suri says the programmable world needs connectivity to handle massive numbers of devices and exponential increases in data traffic. Additionally, it is necessary to have sensing, location-based and low-power technologies. All of this requires enormous amounts of research and development. Much as Finland’s support was integral to Nokia’s rise to dominance in mobile phones, it is now hoped that national strengths will help in their new sphere of expertise.

“Nokia has already been working tightly with universities and I guess this will continue,” Lindén says. “It is of national importance, but this kind of research should not know any borders. It is really up to Finnish researchers to prove what they are capable of.”