British professors Shankar Balasubramanian (left) and David Klenerman, both of the University of Cambridge, visit Helsinki to accept the Millennium Technology Prize, for their invention of next-generation DNA sequencing.

British professors Shankar Balasubramanian and David Klenerman, both of the University of Cambridge, receive the 2020 Millennium Technology Prize, announced on May 18, 2021 after a one-year delay because of the Covid-19 pandemic.

Technology Academy Finland awards the biennial one-million-euro prize to “highlight the extensive impact of science and innovation on the wellbeing of society.” The 2020 edition goes to Balasubramanian and Klenerman for their invention of next-generation DNA sequencing (NGS).

NGS enables fast, accurate, low-cost, large-scale genome sequencing. Genome sequencing refers to determining the complete DNA sequence of an organism. Klenerman, a physical chemist, and Balasubramanian, an organic chemist, started collaborating in 1994. “We were searching for something exciting to explore,” says Balasubramanian. At that time, they were “researchers looking for interesting scientific adventures.”

By 1997, they were focusing on a sequencing system, but it took until 2005 to become “a system that worked,” says Balasubramanian. Even then, it wasn’t yet commercially viable.

“We had to redesign the way that DNA sequencing was being done,” says David Klenerman in this video, which explains the method and significance of next-generation DNA sequencing.
Video: Millennium Technology Prize

NGS has had, and continues to have, an enormous, transformative impact in genomics, medicine and biology. It is a million times faster and cheaper than the first sequencing of the human genome, which took a decade and cost more than a billion dollars. Now it takes a day and costs 1,000 dollars, and a million human genomes are sequenced each year.

The system that Balasubramanian and Klenerman invented and developed has helped predict, identify and understand diseases, leading to more personalised treatments.

“In relation to the Covid pandemic, it was rewarding to see the technology was being used to track the mutations of the virus,” says Klenerman. “It is also being used as a method to identify why some people respond much worse to the virus infections than others.”

Balasubramanian notes that NGS may be used in clinical tests to find certain cancers early enough so that the emphasis can be on preventing them, which is better than trying to cure them later. “I think we’re moving towards…routine blood tests to detect cancer,” he says. 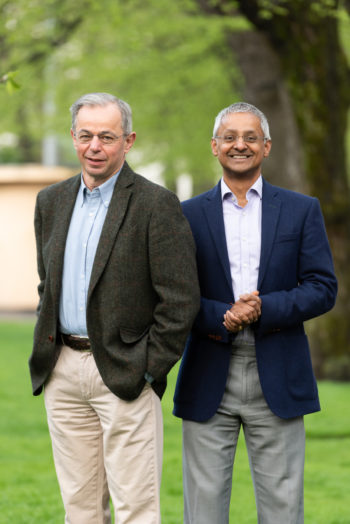 “Health is one issue,” says Klenerman, “but we’ve also got many manmade problems like global warming that we have to deal with. And so, whilst potentially we might be able to live healthier lives, we’re also causing ourselves all sorts of problems with the way we’re behaving.” He hopes that the way scientists collaborated “in a short space of time” to counteract Covid-19 can also help solve climate change.

NGS works by breaking DNA into fragments and giving each one of the many millions of fragments a place on a silicon chip. “Then you decode them all in parallel at the same time,” says Balasubramanian. “That’s what achieves huge capacity and economies of cost.”

Like athletes after winning a big game, Balasubramanian and Klenerman mention that they have had a great team behind them in developing NGS, and that the Millennium Technology Prize belongs to everyone who participated.

“There were many, many failures along the way, of course,” says Balasubramanian. “I was saying to my research group from time to time that the secret of success is to fail quickly. And failure is actually when you start to learn about what the right pathway might be.”

The medicine world needs great data, and Finland’s got it
Business & innovationHealth

The medicine world needs great data, and Finland’s got it

We plunge into Finland’s extensive network of biobanks and research centres.