Helsinki in an ice cream cone

The freshness, pure flavours and pastel colours of one ice cream company make it a mainstay in the capital, but that doesn’t mean life is easy.

One afternoon in the spring, before summer suddenly arrived in Helsinki, the elusive Nordic sun was making one of its first appearances of the year. A frosty wind was ruffling the feathers of seagulls and the bare branches of the trees along the ocean promenade in Kaivopuisto (Well Park), but a determined queue had nevertheless formed outside of the sturdy, wooden kiosk of Helsingin Jäätelötehdas (Helsinki Ice Cream Factory). Coat-clad families, couples and groups of friends sat on nearby benches and ledges with cones full of colourful ice cream.

Despite the cold winters, Finns love their frozen treats – a population of 5.4 million consumes 70 million litres of ice cream yearly – and the legendary Helsingin Jäätelötehdas, founded in 1922, enjoys an unabashedly beloved status. Many people have enjoyed the same flavours since childhood, and an informal survey of Helsinki residents will quickly reveal that the brand is widely considered the city’s best.

Nevertheless, the grandchildren of the Italian immigrant family who started the company still run it with hands-on devotion. The job isn’t always glamorous and the future is by no means certain, but keeping things small has allowed the Magis to maintain the company’s original promise of freshness. 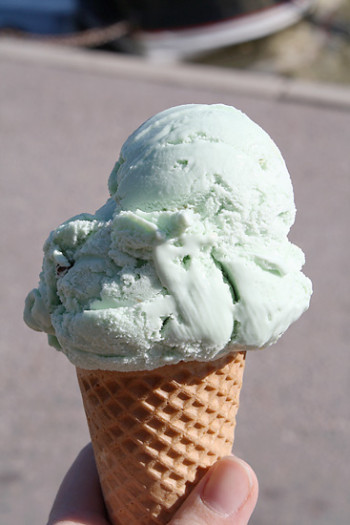 The enterprise was started by six immigrant brothers from Tuscany. Noticing the absence of ice cream vendors in the Finnish capital, the brothers began to make ice cream using familiar Italian recipes and opened a cart in the centre of town. During the winters they made and sold angel figurines to make ends meet.

Today the company is run by sisters Annette and Tina Magi and their husbands Petri and Björn. Its 18 flavours are made in a factory on Mäkelänkatu and sold the following day.

“We have no plans to expand to store sales because we want our product to be fresh,” Annette Magi says. “On hot days we make the ice cream in two shifts. It never stays in freezer for a month or even a week, and people can taste that. That’s probably why they like it so much.”

The soft texture, generous portions, pure flavours and deep pastel colours of Helsingin Jäätelötehdas ice cream certainly inspire loyalty. So much so, in fact, that introducing new varieties has proven tricky. They only rarely come out with a new flavour.

“If we want to introduce a new flavour we have to get rid of one as well, mainly because of space constraints,” Magi says.

The company’s insistence on remaining small amidst the large, international companies that occupy Helsinki’s other ice cream stands also means looking ahead only a few years at a time. The city periodically allows bidding on the city’s kiosks, and Helsingin Jäätelötehdas is up against companies many times its size.

Meanwhile, income depends wholly on the weather. “There are a lot of factors we simply can’t control. Weather is the one single thing that brings our sales up or down,” Magi says. “An ice cream cone is such a small purchase that global economic trends don’t affect us. But even one or two rainy summers can be a real blow.”

Annette’s and Tina’s children are still in their teens, so it’s too early to tell if family ownership will carry on to the next generation. For now, she and her family will continue focusing on the product itself and hoping that the city’s kiosk rental costs will remain within the company’s means.

“I have no idea what will happen in the future,” she continues. “This really is a Helsinki mainstay and people love it, but it isn’t something you get rich from. This is a lifestyle for us.”