Come with me. Hoseli the robot needs help. He’s thirsty. We can help him find the stuff that quenches his thirst. I’ve heard it’s something that isn’t soluble in water.

Children aged three to ten in kindergartens and schools in Europe, Asia, Australia, Africa and Latin America have joined the adventures of Hoseli in a digital fantasy world called Supraland where the small robot lives. They get to try and test things for themselves, like making fake snow or building rockets with vinegar and bicarbonate of soda.

We spoke with the company’s founders, Jenni Vartiainen, Aino Kuronen and Sari Hurme-Mehtälä. Kide Science was born from research Vartiainen did at the University of Helsinki. “International research had shown that children as young as three years benefit from learning scientific thinking, but this finding hadn’t really been put into practice,” says Vartiainen. She took her research to an empirical level by establishing science clubs for young children.

“Some of the parents were surprised at how excited their children got about it all,” Vartiainen says. There was clearly a demand that had not been satisfied. “I was asked to continue running the science clubs.” So began the story of Kide Science.

Children and parents are excited, and so are investors. Between the launch in 2017 and the fourth quarter of 2020, Kide Science raised a combined 2.4 million euros for developing its business. Its education materials are currently available in English, Chinese and Finnish.

Everyone can be a scientist 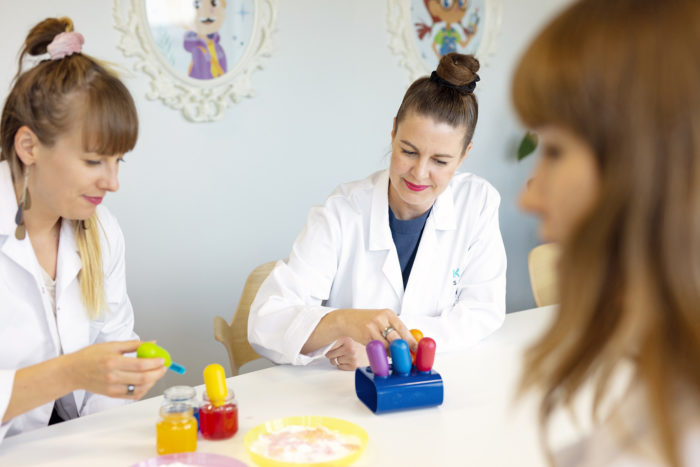 Boosting the curiosity and sense of wonder that children already have is the key. “Kids observe and interpret the world around them from the moment they are born,” the second developer of Kide Science, Aino Kuronen says. “They practice everything in life through play.”

“It’s important not to limit what is there already,” Vartiainen adds. Giving children the space and tools to play the role of a scientist in their own individual ways motivates learning. And when positive emotions pop up, the hunger for learning increases even more.

Digital devices and applications provide the framework for unlimited thinking and playing, but the gist of Kide Science education is in tactile activities.

“It all takes place in the real world,” Kuronen says. “Kids aren’t just staring at screens.” Everyday household items such as salt, bicarbonate, sweets, empty toilet rolls, spoons and peas are among the things that the experiments use.

It’s also about dismantling the misunderstandings around science. “There are a bunch of myths,” says Kuronen. “These include the ideas that you need to be highly intelligent or have a calm temperament to be a scientist.”

Space for flexibility and creative collaboration

A digital environment provides flexibility. “Materials are accessible anytime, anywhere,” says the third of the Kide Science developers, Sari Hurme-Mehtälä. “The platform also makes it easy for teachers to learn the pedagogical model. And we are able to scale the contents.”

And here comes an important point: you don’t have to be a science teacher to begin with. The most important role for adults is facilitating and supporting the children’s own thinking. Vartiainen says the most inspiring moment comes when children start helping each other and suggesting ideas for solving the problems.

With growing demand for distance learning, Kide Science are now researching the best ways to build a pedagogical model for families.

How do the developers of Kide Science see the possibilities of digital tools? “Simulating reality with virtual reality glasses is on the increase, and so is visualising things,” says Kuronen. “For instance you could shrink yourself to fit into a water molecule,” suggests Vartiainen. Now that would be cool, wouldn’t it?

Finland’s high scores in international education rankings are a continuous source of global fascination. How do they do it? Is it something that other countries can adopt?

“To learn how to learn from an early age is at the heart of the matter,” says Katia Al-Kaisi, CEO of Education House Finland. She lives in Dubai, where she runs a business that brings the best of Finnish education to the Middle East, including solutions created by Kide Science.

“Children’s well-being in a broader sense is something that goes beyond the curriculum in Finland. It is based on appreciating and listening to children.” This is reflected in research, like the OECD’s Programme for International Student Assessment. In the latest PISA results, from 2018, Finland stood out among the 79 countries in its connection between life satisfaction and performance.

One example of this was a joint pilot project, in August 2020, to test how cross-border remote learning for young children works in practice. It was led by Education House Finland together with eight other Finnish educational companies. Fifteen children between the ages of five and eight took part.

The topics of this two-week summer camp included science through imagination and play; creative use of technology to make music; meaningful movement; positivity and social and emotional skills; coding; and fun Arabic learning. There was also a gamified online math challenge.

“We received overwhelmingly positive feedback, which strengthened what we already know about the excellence of Finnish education solutions and the level of learner engagement and motivation they embed,” says Al-Kaisi.

Apart from digital expertise, what else do we need in the future to succeed? “Soft skills such as communication and people skills are important. So are resilience and adaptability.” These have all become familiar in the rapidly changing world of 2020. We all have learnt new digital skills in response. Some trends, such as distance learning, have greatly accelerated.

Life-long learning is another necessary mindset. “Think about programming languages. They get renewed all the time. A language you learn now could be obsolete in five years.”