With everything from exotic designer-label clothing to designer chewing gum, lifestyle store Helsinki10 offers a unique environment where shopping is about experience and discovery.

The interior of Helsinki10 forms a cabaret of designs, cultures, ideas and sounds.

A shop doesn’t have to look like a shop, and Helsinki10 doesn’t. It stocks designer-label clothing and even designer chewing gum in a unique environment where shopping is about experience and discovery.

Take a walk down most any street in downtown Helsinki and you’ll see them: the hipsters, the ”groovers,” the dedicated followers of fashion.

Yes they look different but the same, modern and retro, irreverent but snazzy – perhaps for a very good reason. A good number of them have probably visited “lifestyle store” Helsinki10.

It could be easy to mistake the establishment – located amidst the cozy galleries, coffee shops and shops tucked in along Eerikinkatu in the Finnish capital – for something other than a clothing shop. Its arched entrance looks like a regal gateway to an old bank with marble floors and pillars, but the interior is a cabaret of designs, ideas and sounds.

The space, all 450 square metres of it, is filled with treasures such as exotic jeans, designer shirts and dresses, jackets, shoes, jewellery, accessories, CDs, LPs, coffee table books and even an assortment of designer chewing gum. A little chalkboard outside offers only “take away coffee” – not some brand-name sales pitch – as an invitation to come inside.

Because that’s what co-owner Anssi Heiskanen wants you to do. 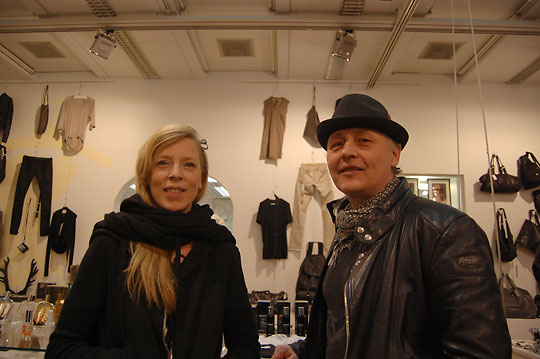 Eeva Vuolasvirta (left) and Anssi Heiskanen created Helsinki10 after a trip to to Japan opened their minds to new aspects of retailing.Photo: Mark B. Odom

Heiskanen, a veteran of the design and clothing business for the past few decades who also started the street-apparel shops Union Five in the 1990s, wanted to begin something new.

After an eye-opening visit to Tokyo in 2000 together with business partner Eeva Vuolasvirta, the head buyer at Helsinki10, Heiskanen says they realised there’s more to retail shopping than inventory, sales and receipts.

“In Japan, we saw that a shop didn’t have to look like a shop,” Heiskanen explains. Spaces could be more organic and unique. The items for sale might consist of only a few special pieces.

The revelation turned their minds to new ways of doing business. One of the manifestations of this “new” vision in Helsinki was this shop without storefront windows or gaudy signs.

The reasoning was that the fashions – paired with the experience of discovery – would sell themselves, like they do in the real world.

Finnish style and fashion editor Claudia Cifu says that fashion in Helsinki and the world is not dictated by what’s on the runway, but by a mixture of cultures, designs and ideas. The internet hasn’t hurt the trend, either.

“I like the fact that higher-end fashion seems to take more and more influences from underground culture and music and from different ethnic cultures,” Cifu says from New York while working on a magazine photo shoot.

“I also like that people who know fashion give more importance to personal style than designer names,” she says. “It’s all about how you work it.”

Helsinki10, Cifu believes, has taken that mindset to the streets.

“They brought Helsinki a totally new concept behind a clothing store,” she says. “Even if you can’t afford to buy something there, young people can actually see and touch some runway pieces. Before you could have this experience only if you travelled abroad, or looked at photos in magazines, or on the internet.”

“I would call this fashion for people in their 20s to 40s,” Cifu continues. “This generation was kind of forgotten before. You could get ladylike clothing from higher-end boutiques, and Benetton, Sisley or Guess type of clothing for young ‘fashion forward’ people. But there was definitely a piece of the puzzle missing before.”

Prior to Helsinki10’s debut in 2006, Finns had to travel abroad to shop for exotic designer labels like Eley Kishimoto, Ann DeMeulemeester, Bernhard Willhem and Vivienne Westwood.

Helsinki10 also stocks Finnish designs, which are hot around the world right now. “Marimekko and Ivana Helsinki are very exotic and hyped over here in New York,” Cifu says. “It’s the Scandinavian simplicity in designs and handcraft look that attract the fashion people here.

“Because music and fashion go many times hand in hand,” she adds, “fashion people are very attracted to the Finnish Goth and heavy metal looks. They’re a bit odd, but everything that’s a bit odd, in the end fashion people embrace it, and it becomes cool.”