Blogging by and for entrepreneurs

We meet the editor of ArcticStartup, the place to go for info on the newest in Nordic and Baltic entrepreneurial spirit.

Ville Vesterinen joined the blog ArcticStartup as editor after its founders sought him out: “We all share the same passion for promoting growth entrepreneurship and start-up culture,” he says.

With its coverage of Nordic and Baltic growth entrepreneurship, the blog ArcticStartup has become required reading for investors, entrepreneurs and technology journalists across the globe.

After graduating from the London School of Economics, Ville Vesterinen moved to Amsterdam to work for a global IT solutions provider. But, quickly realising that working for a large corporation did not chime with his entrepreneurial streak, he resigned in 2007 and returned to his native Finland to help his friends set up a company publishing city guides across Europe.

“When I came back to Helsinki, I started asking around to find out where the local entrepreneurs convened,” Vesterinen says. “But noticing a clear lack of events and forums, I thought I might as well set up one myself.”

He had read about OpenCoffee and thought it might be just what Finland needed. OpenCoffees, first introduced by British venture capitalist Saul Klein, are informal events – or “meetups” – in which entrepreneurs, web developers and investors meet each other to chat and network. Vesterinen organised the first Helsinki OpenCoffee Meetup in September 2007.

Before long, he was approached by Antti Vilpponen and Miikka Kukkosuo, two entrepreneurially oriented web professionals who had just kicked off ArcticStartup, a blog covering the Finnish start-up scene. “We started talking and quickly realised we all shared the same passion for promoting growth entrepreneurship and start-up culture,” Vesterinen recalls. The three men decided to combine forces, Vesterinen joining ArcticStartup as editor.

At that point, all three had day jobs – Vesterinen in advertising, Vilpponen in internet consulting and Kukkosuo in online gaming. To ensure ArcticStartup received the attention it required, they also took onboard a fourth partner, Karri Saarinen.

From the beginning, the quartet realised that to truly promote entrepreneurial culture, writing about start-ups had to be complemented with OpenCoffee-style networking events, and so ArticEvenings were born. Besides informal chatting, the concept includes panel discussions featuring experienced entrepreneurs, investors and other members of the start-up ecosystem.

They also decided that instead of just Finland, ArcticStartup should focus on all the Nordic and Baltic countries. Says Vesterinen, “We soon realised that although all countries did have their own start-up communities, there was very little interaction between them. Our aim is to bring like-minded people together in the entire region.” In addition to Helsinki, ArcticEvenings have since been held in Stockholm, Copenhagen, Reykjavik and Tallinn.

On the journalistic side, ArcticStartup has become a must-read for anyone wanting to stay up to date with Northern European growth entrepreneurship. The website now attracts 30,000 visitors a month, among them venture capitalists from across Europe and the US looking for companies to invest in. It’s not uncommon for a start-up to be approached by several interested investors after being covered by ArcticStartup.

According to Christina Forsgård, founder of Finnish technology PR firm Netprofile, “ArcticStartup attracts readers across the globe because the writers are entrepreneurs themselves, so they have first-hand experience of what they are writing about. The website covers cutting-edge technology companies in a way that is highly appealing to international investors, partners and clients. In many ways, they are already doing what others are still only talking about.”

In March 2010, ArcticStartup received an award from the Finnish Society for Innovation Journalism for its reporting on Finnish start-ups.

The founding of ArcticStartup has coincided with, and in part contributed to, a general trend of increased interest towards entrepreneurship in Finland, especially among young people. According to a recent survey by the research firm Taloustutkimus, 60 percent of Finns under 24 consider entrepreneurship as a viable career option after graduation – a marked improvement from previous years. 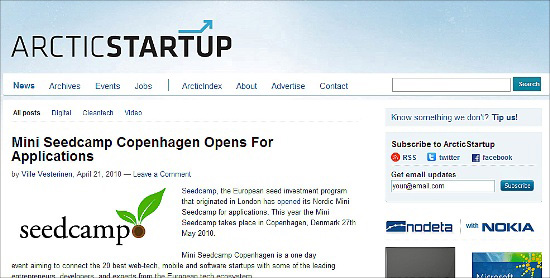 ArcticStartup focuses not only on Finland, but on all the Nordic and Baltic countries.

“Starting your own company has become cool in the same way starting a rock band was in my youth,” says Vesterinen.

He nevertheless finds things Finland can improve on. Firstly, the presence of angel investors and venture capitalists is currently too limited. “But luckily the situation is getting better all the time. I have high hopes especially for the government-backed Vigo programme aimed boosting the Finnish venture capital industry.”

Secondly, Finland lacks what Vesterinen calls “start-up universities” – consumer-oriented internet start-ups that have grown rapidly into successful companies. “In Silicon Valley, for example, many of the new entrepreneurs started their careers in firms such as Google or Yahoo. Working for a few years in such an environment provides you with skills impossible to attain at any educational institution.”

One recent milestone for ArcticStartup has been the Finnish mainstream media starting to cite the blog as a source for breaking start-up news. So far this has happened only a few times, but given that the writers are better connected to the start-up community than any reporter from a traditional outlet, the trend is likely to continue.

“ArcticStartup does not aim to become a mass publication,” Vesterinen says. “Given that we focus solely on providing news and analysis for the start-up community, our readership will probably not grow dramatically from the current numbers.” Instead, the company is constantly looking for new ways to promote entrepreneurship: “We have been consulting other start-ups for a while now in product strategy, public relations and marketing. We are also developing our own software products for small companies.”

As for Vesterinen himself, he remains constantly on the lookout for new and exciting things. Covering the Nordic and Baltic start-up sector as the editor of ArcticStartup naturally remains a top priority, but he wouldn’t be an entrepreneur unless he had “a few new start-up ideas brewing.”