World Cup-winning slalom skier Tanja Poutiainen has said that she loves competing in Levi in front of a home crowd.

Levi Fell ski resort in Finnish Lapland rose rapidly to become one of the country’s biggest tourist centres. Local experts have played a key role in this fairytale development.

Experience teaches lessons, but it can also be a shackle. At Levi, many things were different from other places in Lapland. The most important of these was land ownership: Levi was not controlled by Metsähallitus, Finland’s Natural Heritage Service. Also, the core of the winter tourism business infrastructure – the downhill ski slopes and lifts – remained in local hands. The ski lift company has been the engine driving Levi’s growth, and there have been bitter battles over its ownership. In the late 1990s, the local municipality of Kittilä gained majority ownership, which has remained stable ever since. Now, in any case, there is certainty that the work in Levi and Kittilä is solely targeted at developing the resort.

Taking the helm at the Levi lifts company, now called Levi Ski Resort Ltd, was Jouni Palosaari, a young building engineer from Kittilä. A tireless background champion of Levi, municipal director Aarne Nikka, wrote in his memoirs in 2003 that the company’s decision to hire Palosaari was “one of the most important in its history”.

In fact, Palosaari did not have to start from scratch, although from the current perspective the 3,500 hotel beds available at the resort in 1988 seems paltry.

An active policy of land acquisition was the basis for development – and all sellers were paid equally well. Good plans were made, but many of them were undermined by the recession of the early 1990s. Financing almost dried up completely, as ski lifts were declared to be impossible investments. The leaders at Levi did not give up: 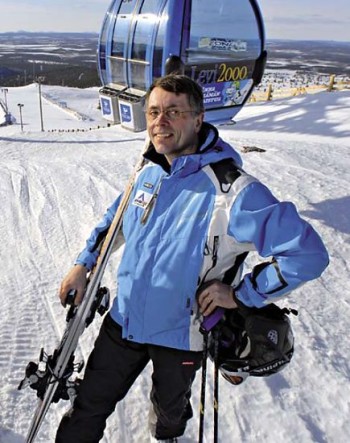 “We decided that if there are already enough ski lifts in Finland, then they are in the wrong places,” says Palosaari.

Levi has had reason to be grateful for the stubbornness of Palosaari and his partners.

The harsh truth of the recession years was that the death of one business was often the salvation of another, and this was equally true in the downhill ski industry.

“Three ski resorts, Muurla, Juupavaara and Kivesvaara, were going bankrupt, so I bought all of their equipment.”

Thus Levi got the country’s newest lifts for next to nothing. Therefore, it was better positioned than its competitors to invest in other areas when construction costs were low.

The strongest part of Levi’s marketing has been to attract major competitions, which is the hardest-fought battle in downhill sports. Success – “in an Alpine country with no Alps” – is quite a trick in itself.

“The factors that were blocking us from landing major events were darkness, cold and distance. We had to turn these to our advantage. The international ski federation FIS requires 90 lux of light on the slopes, while television requires 800. We built 900 lux worth of lighting on our competitive slopes. Now we can offer conditions that suit prime-time viewing hours in central Europe.

“Even the cold has turned in our favour. In February 2004, we had an amazing atmosphere at the opening ceremony of the women’s World Cup event. The next morning, the thermometer showed a reading of -36 degrees Celsius. I thought everything would be ruined. But the Slovenian team was enthusiastically posing for pictures next to a thermometer. No-one complained, and during the day the temperature rose to zero. Some central European resorts had had to cancel competitions that winter because of mild weather, so we were praised for offering real winter conditions.

“When we applied to host the opening event of the World Cup season in November 2006, we were able to demonstrate that is actually closer in some ways. Whereas in continental Europe you have to drive over winding mountain roads, we have an airport right at the foot of the slopes.”

In marketing events, organisers have found it good to emphasise the contrasts: on one hand Lapland and winter in seemingly primitive conditions, while on the other hand journalists are offered “Nokialandia” information technology services that far surpass those at other venues.

As proof that this combination works, the FIS has recently decided that Levi will host the opening event of the World Cup Slalom season annually until at least the year 2012. The television exposure that such events provide is massive. Its value in terms of marketing not only Levi, but all of northern Finland’s winter tourism industry, as well as to the sport itself, cannot be overestimated.