US wise guy makes fun of life in Finland

The book How to Marry a Finnish Girl shows why kids can speak Finnish but you can’t, how to avoid summer cabins, and more.

How to Marry a Finnish Girl catalogues various aspects of life in Finland with merciless humour- from the do’s and don’ts of dating in Finland to a drinking guide to Finnish national holidays.

Judging by his new book, How to Marry a Finnish Girl, American Phil Schwarzmann clearly feels he has paid his dues and has permission to tease the Finns after almost a decade in their country.

Subtitled Everything you want to know about Finland that the Finns won’t tell you, Schwarzmann’s tongue-in-cheek list of jibes, dubious advice, grievances and cultural interpretations begins with a warning in the about-the-author blurb: “Don’t take anything he says or writes too seriously.” He has spent his time in Finland working for “a large Finnish mobile phone manufacturer” – and doing stand-up comedy.

And How to Marry a Finnish Girl is entertaining and astute – although also exaggerated and offensive at times, depending on your point of view. The chapters cover getting married (“How to marry a Finnish girl in 10 easy steps”), but also all sorts of other potentially puzzling aspects of Finnish culture, including “Welcome to heaven on earth,” “Why do people get trapped in Finland forever,” “How to build your own house like a real Finnish man,” “Toddlers speak Finnish, why can’t you,” “The coffee and cake trap” and “How to avoid your family’s summer cabin.” 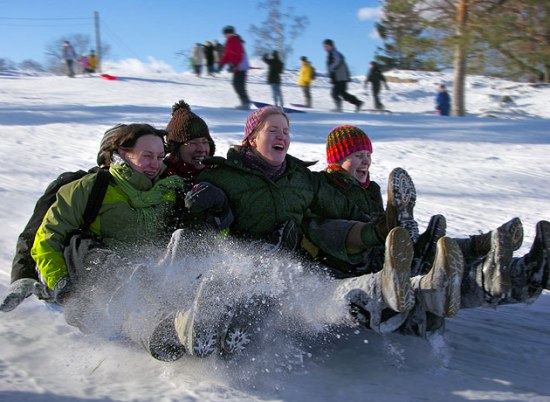 Schwarzmann’s book mentions that Finland is heaven on earth during the summer, but we think winter can be a lot of fun as well. Photo: Niklas Sjöblom/taivasalla.net

“I came to Finland purely for love,” Schwarzmann said at a recent event to promote the new book, so you’d guess he possesses some wisdom about marrying a Finn. But he has never been married – although he and his girlfriend are still together, if you’re wondering.

“Finns can make fun of themselves,” he noted. “Not every country can do that.” This book is his opportunity to make fun of the Finns just before he skips out, leaving Finland bound for Silicon Valley, California. “If you’ve lived somewhere long enough to write a book about it, it’s probably too long,” he admitted.

How to Marry a Finnish Girl catalogues various aspects of life in Finland: How about a test to determine whether you should live in Espoo (Finland’s second-largest city, “more of a sprawling suburb” outside Helsinki)? Or a month-by-month guide to surviving the seasons? The top ten reasons why you should move to Finland (and the top ten reasons why you shouldn’t)? A drinking guide to Finnish national holidays? The do’s and don’ts of dating in Finland?

As amusing as the book is to those who already live in Finland or were born there, it does not represent a guidebook for first-time visitors. The humour can only sink in after you’ve been in Finland a while. And chances are that even if you leave, you’ll find yourself there again someday.

“I’m scared of going to the US,” Schwarzmann said to the audience, this time apparently more serious than joking. “I know I’ll be back in Finland soon and I’m already looking forward to coming back.”