Two Finnish designers to check out

Helsinki Design Week, September 7–17: Lotta Nieminen and Klaus Haapaniemi are two Finnish designers out of the many whose talent, skill and products appear in connection with top international brands.

Finnish designer Lotta Nieminen has made Brooklyn the base for her career.

Nieminen is the creator of strikingly colourful, nuanced illustrations for clients such as IBM, Hermès and the New York Times.

She has even made it onto Forbes magazine’s 30 Under 30 list. A graduate of Aalto University in Helsinki, she has designed everything from window display illustrations to children’s books. Her most recent work is her illustrated children’s book Pancakes! An Interactive Recipe Book. 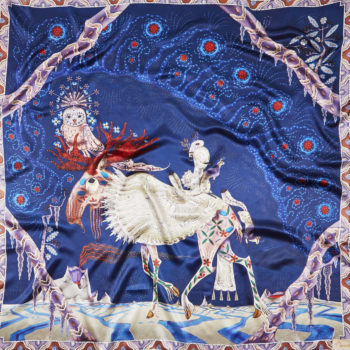 This scarf by Klaus Haapaniemi is part of the series “Polar Byzantine,” which follows a story by Finnish author Rosa Liksom. “A true arctic odyssey,” says Haapaniemi’s website.Photo: Klaus Haapaniemi

His impressive résumé includes work for global brands such as Christian Louboutin and Established & Sons, and his designs inspired by mythological elements can also be found on Iittala’s tableware and even on the opera stage. Since 2010, he has had his own shop on the popular Redchurch Street in London.

Q&A is the 2017 theme for the annual Helsinki Design Week, so we ask some Finns who live and breathe design what makes it so fun.

This year Helsinki Design Week is looking for questions and answers, and has named its theme accordingly: Q&A. The annual design festival takes over the Finnish capital from September 7 to 17, 2017.