Two eye-catching exhibitions celebrate the 160th anniversary of the publication of the Kalevala, Finland’s national epic.

Akseli Gallen-Kallela painted Lemminkäinen at the River of Fire as part of a deal to gain funding for the Great Kalevala from Eduard Polón, director of the company that later became Nokia.

This year marks the 160th anniversary of the publication of Finland’s national epic, the Kalevala. A new exhibition shows how artist Akseli Gallen-Kallela planned a richly illustrated Great Kalevala volume, and how influences from as far away as New Mexico found their way into his depiction of Finnishness.

You could interpret the tried-but-true proverb “Travel broadens the mind” as meaning that you need to go abroad to gain perspective on your own country. Maybe that’s how Askeli Gallen-Kallela came to find himself creating illustrations for the Kalevala, the Finnish national epic, while in New Mexico in the mid-1920s.

Gallen-Kallela (1865–1931), a prominent artist in the Golden Age of Finnish art, travelled around Europe, East Africa and the US. The sketches he made in New Mexico formed part of his Great Kalevala project. Their bright colours and decorative style show influences from Native American art. “I’ve made four full-blown Kalevala pictures here like newly baked bread,” he wrote at the time.

How’s that for a new perspective on Finland? One of the country’s most famous artists was absorbing influences on another continent while interpreting the verses that are considered the very core of Finnishness.

The Great Kalevala forms the subject of the Gallen-Kallela Museum’s spring exhibition, which marks the 160th anniversary of the Kalevala epic’s publication as we know it today. Author Elias Lönnrot (1802–1884) wrote down the verses from ballads and poetry that had previously belonged to a solely oral tradition. The Kalevala holds important significance in the Finnish cultural identity.

Gallen-Kallela planned a grand version of the Kalevala as his gift to the Finnish people, a gold- and silver-decorated volume with 700 parchment pages including 150 paintings. The leather covers would be adorned with Finnish stones and freshwater pearls.

“All my life, though at first unaware of it, I have prepared for this task,” he wrote in 1925. “The Kalevala with its world of images [has always] spurred my pen….and this work has continued throughout my life wherever I have been on the globe.”

In the end, Gallen-Kallela completed illustrations for five of the 50 Kalevala “runes” before passing away. The Gallen-Kallela Museum complements these with other Kalevala-themed works by the artist.

The museum is located just northwest of Helsinki in Gallen-Kallela’s waterside studio and home, a miniature castle well worth a visit in itself for anyone interested in his life and work. Some of his most famous paintings of Kalevala motifs can be found downtown, such as the four scenes that decorate the ceiling of the main hall at the National Museum.

The Ateneum Art Museum is home to Gallen-Kallela’s famous triptych The Aino Myth. This spring and summer Ateneum also presents the most extensive show of Kalevala art in decades. It includes more than 200 works by almost 60 artists, all inspired by the Finnish national epic. In addition to bringing together many venerated, famous pieces, the exhibition displays the work of ten artists and ten composers commissioned by the Kalevala Society to express how the Kalevala looks and sounds in 2009. 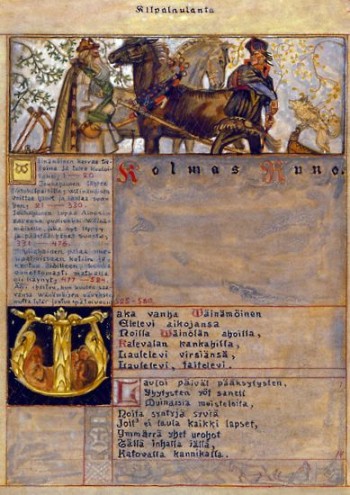 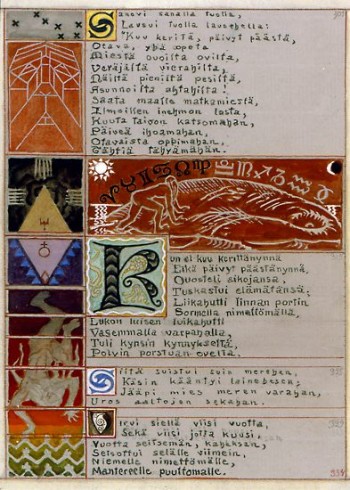 Akseli Gallen-Kallela: Illustration sketch for the Great Kalevala, Rune I: “Then he spake the words which follow…”Photo: Gallen-Kallela Museum/Douglas Sivén 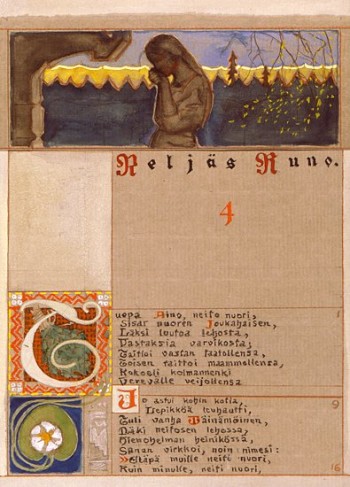