Detail from Pekka Halonen’s “The shoreline by the sauna as the ice recedes” (1916), completed the year before Finland achieved independence. (Click on picture to see uncropped version.) 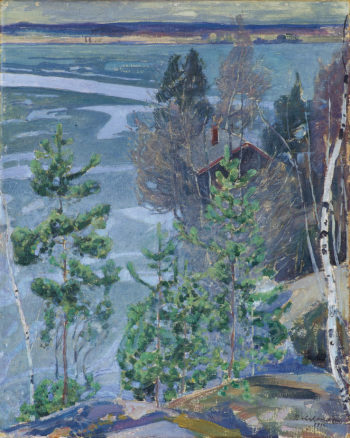 Artists Pekka Halonen and Akseli Gallen-Kallela and composer Jean Sibelius, all born in 1865, helped form the Finnish national identity. When Gallen-Kallela and Halonen recently reappeared on Facebook and started posting their thoughts, modern readers began to interact with the painters as if they were still alive.

For Finland, 2015 marks the 150th anniversary of the births of two famous artists (Akseli Gallen-Kallela and Pekka Halonen) and the country’s most famous composer (Jean Sibelius). All three had houses near Helsinki and belonged the same circle of friends during a critical time in the formation of the Finnish national identity, helping set the scene for Finland’s eventual independence, achieved in 1917. The legacies of this trio of cultural figures still resonate profoundly in Finland today. The three friends fuelled one another’s creativity as they expanded the frontier of Finland’s rapidly evolving artistic scene. Both Sibelius and Halonen joined many of their creative peers residing near Lake Tuusula, about 30 kilometres north of Helsinki. Surrounded by nature, they took their inspiration in the colours of their environment. Halonen would become renowned for his beautiful winter landscapes, and Sibelius transformed the visual splendour into majestic soundscapes. His compositions also formed a source of inspiration for Gallen-Kallela’s paintings. 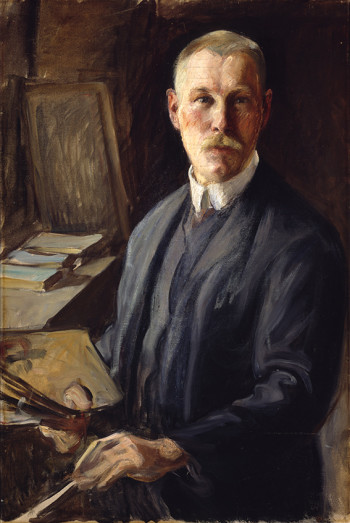 Pekka Halonen, shown here in a self-portrait, has “reappeared” and is posting on Facebook, as is his colleague Akseli Gallen-Kallela. (Click on picture to see uncropped version.)Photo: Halosenniemi

The trio’s shared inspiration extended to their wider social network. Here they explored integral themes and issues that played a significant role in the formation of the national identity, as Finland’s independence beckoned in the early 20th century. “Outside of art they were culturally influential people,” says Satu Rantala from the Gallen-Kallela Museum, located just outside Helsinki. “They were right there in the middle of society.” The social network they maintained in those days has now inspired an innovative way to celebrate the two visual artists in particular. Profiles for Gallen-Kallela and Halonen have been created on Facebook, utilising the modern era’s fascination with social media. Visitors to the pages are transported back to 1915. As the calendar year unfurls, fresh posts mark historical events in the artists’ lives during that year and seek to illustrate the richness of each man’s character. “We’ve used archival material such as their receipts and remnants of their personal lives, like menus,” says Rantala, who is responsible for the project. “We have letters and photographs, and we know what exhibitions they had during that year. We also really like to connect their lives to what happened in society at that time.” 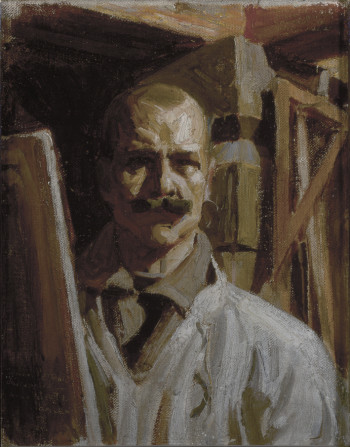 Akseli Gallen-Kallela painted this self-portrait for the Uffizi Gallery of Florence, Italy in 1916. (Click on picture to see uncropped version.)Photo: Douglas Sivén/Gallen-Kallela Museum

As the year progresses, aside from accumulating a growing number of “likes,” the project is generating an interesting response from visitors: many are interacting with the artists as if they were still alive. “People want to make a connection,” Rantala says. “They have come out with various information that they have, such as a nice story, or they may have known someone from [the artist’s] family.” One man posted greetings directly to Halonen, who turns out to have been his great-grandfather. Another reader mentioned that she had had the pleasure of meeting Halonen’s daughter in the 1960s. Other comments are directed specifically at the content of the posts. One woman wished Gallen-Kallela success with his “forthcoming” exhibition at the Panama–Pacific International Exposition in San Francisco. Others commented when there was a flood at his residence. Interestingly, Gallen-Kallela’s page has also been able to dispel the myth that he was less enthused about his contemporary female artists, providing archival proof to the contrary. The project also charts many of the artists’ international travels, offering insight into historical context connected to numerous other countries in addition to Finland. Given the artists’ global profile, interest is also expected from Facebook visitors abroad. To meet this audience, many postings made by the two artists are also translated in English, sometimes directly following the Finnish text in the same post. The Facebook pages demystify the two artists, reinvigorating their legacies for today’s audience.

“People suddenly feel very familiar with Gallen-Kallela,” says Tuija Wahlroos, director of the Gallen-Kallela Museum. “It seems that people have not forgotten him. They’ve been waiting for the right way to approach him.”