Designer Tapio Wirkkala’s artworks can be seen in the world’s most esteemed museums – and also in regular Finnish homes.

The father figure of Finnish applied art created some of the nation’s most recognisable designs, from household utensils to objets d’art.

Tapio Wirkkala (1915-1985) rose to world fame in the early 1950s following the breakthrough of Finnish industrial design at the triennial fairs of 1951 and 1954 in Milan. Wirkkala was an exceptionally versatile artist who was not held back in any design project by challenges of scale, materials or conventions.

He is best known as a glass designer although his artistry ranged from postage stamps to a fell-sized landscape memorial, and from a tumbler to a futuristic cityscape.

Wirkkala was an artist in whose work the sources of inspiration evolved into powerful shapes like natural phenomena. The object achieves perfection when the mind and the matter, the idea and its realisation, the form and the function merge. Shape was just not an aesthetic goal or intellectual perception for Wirkkala. It was born of a sensitive dialogue between thought, hand, eye and material. 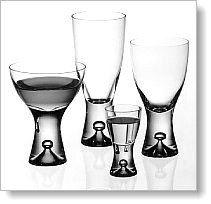 Wirkkala’s themes often derived from nature: from leaves, from the swirls of seashells, from the shapes of birds or fish, or more distant observations such as ice formations or the movements of water. Usually his primal emotion is so deeply ingrained in the object created that its origin can no longer be identified or analysed. He also sought inspiration from his travels abroad and from early Renaissance art.

Wirkkala combined art and craft in serial manufacture, when artistic form met anonymous industrial production methods. He bonded Finnish rural simplicity to universal elegance, sensitivity and discernment. He wedded light-hearted experimentation to a sense of high seriousness. His objects feature both a sculptural theme and a scientifically researched functionalism. 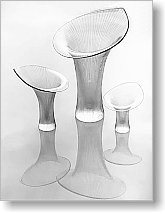 Wirkkala’s artworks and objets d’art are exhibited in the most important museum collections the world over, while his anonymous household utensils have been well-worn in the hands of the Finnish people for decades. His name is so widely linked to luxury objects that few know, for example, that such everyday items as Finnish banknotes and ketchup and liquor bottles are Wirkkala’s creations. 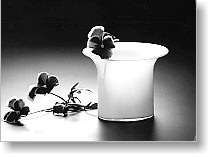 Tapio Wirkkala spent long periods abroad, most notably in Italy, Germany and Latin America. His modesty, diligence and professional skill removed barriers of language and culture whether he was working with glass blowers in Venice or traditional silversmiths in Mexico.