Signmark does what he wants

The world’s first deaf rapper, Signmark raps in sign language, taking a stand on issues that matter – in New York’s Washington Square Park, among other places.

Signmark, the first deaf rapper and the first deaf person with a recording contract at an international record company, is changing the world by rapping in sign language – in New York’s Washington Square Park, among other places.

Marko Vuoriheimo (born 1978), better known as Signmark, began making music as a child by interpreting Christmas carols for relatives with hearing disabilities. In 2006, he released Signmark, the world’s first rap album by a person who is deaf.

His second album, Breaking the Rules, appeared in 2010 – this time on the Warner Music label. He doesn’t shy away from taking a stand about human rights and tolerance. His videos and live shows are bilingual; his group plays and raps his lyrics aloud while Signmark raps with his hands.

Signmark’s popularity extends from his home country of Finland to arenas in Germany, England and Austria. In Japan he has appeared in a live broadcast for an audience of millions.

In a unique event called Silent Shout, Signmark rapped in Washington Square Park in New York on September 23, 2010, with the crowd signing along on the chorus of his “Against the Wall” in American Sign Language.

Part of International Deaf Awareness Week, the event aimed to help “build a society where everyone has the equal opportunity to participate and dream.” Silent Shout is making a statement by gathering a diverse crowd for the concert experience.

Signing a rhyme in time 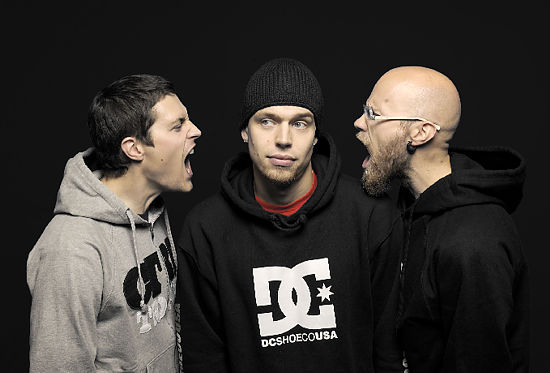 Raps in sign language rhyme just as spoken words do. The performer signs in rhythm, and the final syllables of each line are formed by similar hand shapes and signs.

The bass line represents the most important element for deaf rappers, since it helps them follow the flow of the music and rhythm. Facial expressions support the signing and improvisation forms an intrinsic part of the process. Put this all together onstage and you’ve got a show that’s not to be missed. The artist describes his creations as light but thoughtful party music. He believes that people with hearing disabilities should not be treated as disabled, but rather as part of a linguistic minority with its own culture and history.

Signmark begins by using headphones to experience music made by a friend, evaluating its feeling and tempo. He concentrates on the rhythm of the bass, creating background music and honing the results. Signmark’s band includes vocalist Brandon Bauer rapping the lyrics for the hearing audience, who can find a new rap music experience in Signmark’s visual performance.

And he has a full schedule at his “day job,” too. Signmark, who possesses a master’s degree in educational science, teaches sign-language interpreters at the University of Applied Sciences in Helsinki, and has also published an autobiography.

With a long list of achievements already under his belt, the ambitious Signmark shows no indication of slowing down. That’s not what he’s about.