Shouting with a Finnish twist

A choir called Huutajat has screamed its way to international cult status, yelling all the way from Oulu to Australia.

Shouting match: Huutajat, a choir from the northern Finnish city of Oulu, screams music at the audience.

Mieskuoro Huutajat (Shouters Men’s Choir), which began as a “serious joke” at a bar in the northern city of Oulu, has become one of Finland’s most startling – and most enduring – cultural icons.

Since Mieskuoro Huutajat (Shouters Men’s Choir) was founded in 1987, hundreds of men have appeared in its revolving 30-voice line-up, startling audiences around the world. This year, they have bellowed poetry, nursery rhymes and political tracts in Stockholm and Copenhagen. Next up is Australia, where they will shout on the steps of the Sydney Opera House in May as part of the city’s biennale.

You can also try your own hand – or voice – at the exhilarating, witty Huutajat experience if you’re lucky enough to attend one of their workshops. These events have been held as far away as Sweden and Austria. Though the original Huutajat concept is clearly male – described by a Sydney Biennale curator as “a parody of discipline and male power, suffused with a taste for the absurd” – the workshops are open to women as well.

“The last time, about one third of participants were women,” Sirviö tells me at an Oulu café. “Musically it was very inspiring; girls are faster at learning the parts than guys! But conceptually this has been such a strongly male thing. I did a piece for a local opera where more than half of the performers were women. I could teach them the spirit and the structures and the pieces – but when it came to actual techniques of how to build a voice, I just had to give up.”

Banned by both sides 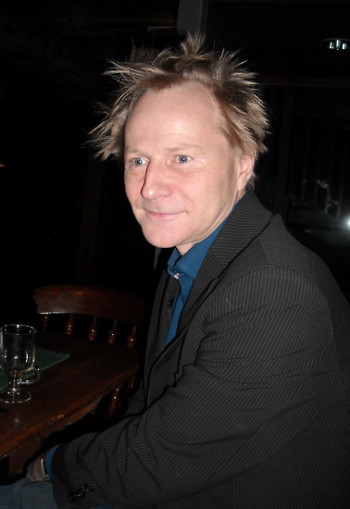 Like many of the original Huutajat choir members, conductor Petri Sirviö came out of the noisy rock scene of the 1980s.Photo: Wif Stenger

Over the decades, Huutajat have also formed part of two operas in Munich and a production of Peer Gynt in Oberhausen. Their European Broadcasting Union concert in 2009 featured electronics and snippets of the Communist Manifesto. They’ve also done dance theatre, videos and the acclaimed documentary Shouting Men.

“The film was banned from a festival in North Korea because we included the Japanese national anthem,” Sirviö says. “In Poland some right-wing politician tried to start a criminal investigation because we performed their national anthem, which he said was a provocation. If the North Koreans and Polish right-wingers don’t like us, I guess we’re right in the middle.

“National anthems are interesting because they often include very strange, mixed emotions – awful lyrics even – but people sing them in very high spirits, and they unite people.”

One of the project’s basic themes is discipline, he says. “But discipline of groups has changed so much in the past two decades. The younger guys are much more reckless than we were. There’s always very strong hidden discipline in every society and pressure toward a uniform dress code or behaviour, but nowadays it’s more hidden.”

Keep it simple – and offbeat

The Shouters belong to a Finnish tradition of musical eccentricity based on using the traditional to create something radical and playful. Others have chosen the accordion (Kimmo Pohjonen), harmonica (Sväng), cello (Apocalyptica), klezmer (Alamaailman Vasarat) and humppa dance music (Eläkeläiset). 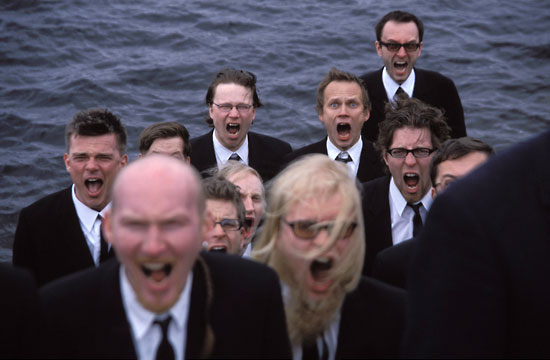 Off the deep end: Maybe it’s got something to do with the Finnish temperament.Photo: Jaani Föhr

“Maybe that’s some kind of Nordic minimalism, a way to keep it simple: just cellos or just shouting,” suggests Sirviö. “We love these simple, clear ideas.

“Back when we started, there were no examples of how to become rich and famous doing music, so you were free to do anything.

Now it’s more like a brand; there’s a roadmap of how to do it.” Now 48 with teenaged kids, this former punker has an “establishment” day job at the city cultural office: “Of course there’s a danger in being accepted by the establishment,” he says with a wry smile. “It’s difficult to keep a balance. But in a way we were ‘officially’ accepted at quite an early stage, though we’ve always been quite underground. The whole concept is somehow quite dry and clean, so you can put it anywhere without being that disturbing. Our look is quite traditional.” They sport black suits, white shirts and skinny ties made of rubber tyres.

“About one-third of the guys have been with us since the start – I guess they have life sentences,” says Sirviö. “Some of them are now 50 and are still part of this piece of art. It’ll be interesting to see them start to lose their teeth and turn into a group of angry grandpas! There are now two generations within the choir; someday there will be three.

“The basic concept has remained the same. I love the test of how the world changes around it.”