Celebrations to mark the birthday of national poet J.L. Runeberg possess special meaning in the hometown of one of his best-known creations. What wisdom would Runeberg’s Paavo of Saarijärvi offer if he could see Finland today?

The small town of Saarijärvi, not far from Jyväskylä in central Finland, has a special reason for celebrating Runeberg Day on February 5, the birthday of Finnish national poet Johann Ludvig Runeberg (1804–1877). The village has a literary link with one of his best-known works, entitled Bonden Paavo (Paavo the Peasant) in the original Swedish.

In Finnish the poem is called Saarijärven Paavo, (Paavo of Saarijärvi). Paavo was a fictional rustic peasant who responded to his life of abject poverty with heroic stoicism, a lyrical impersonation of sisu, the self-perceived Finnish quality of gritty persistence.

Paavo has acquired an iconic status in his literary hometown, and the celebration of his virtues is not restricted to Runeberg Day. The result of an annual election of the Paavo of Saarijärvi, chosen in closely guarded secrecy by the Saarijärvi Society, is announced on the morning of Midsummer Day.

The announcement is made in front of the village’s bronze statue of Paavo. A wooden Paavo model is presented to the new recipient, and national composer Jean Sibelius’s hymn “We Praise Thee Our Creator” is performed before the entourage heads to church.

“The selection of the Paavo demonstrates Saarijärvi’s significance as a source of Finnishness, or what people think of as Finnish character,” says Kari Kotilainen, director of the Saarijärvi Museum and the youngest Paavo ever, 45 when selected in 2002. 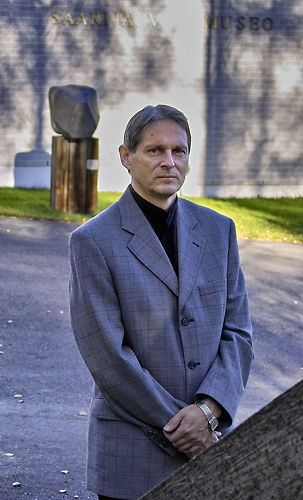 “The announcement gets plenty of media attention and there is a big crowd present,” says Kotilainen. The spirit of Runeberg’s original Paavo is the main general criterion for selection, and the recipient must have shown, in his respective field, the tenacity and sense of endurance of the poetic idol.

As Finland gets sucked into the economic woes affecting the rest of the world, it would be interesting to know what poetic Paavo would make of 21st-century poverty and the ensuing hardships.

“If the fictional 19th-century Paavo had fallen asleep and woken up today, the almost complete disappearance of the significance of nature in ordinary working life would be a source of wonder to him,” says Kotilainen. Clearly, Paavo would wonder what all the fuss is about as he compared the social safety nets of modern Finland with his own contemporary hand-to-mouth daily struggle for survival.

In some respects, however, there has been continuity. “Up here in the north, communities have always been able to create a tolerable safety network, and the help of a neighbour would have been asked for in Paavo’s day.”

“But Paavo would surely wonder how it can be possible that, in such an affluent country as modern Finland, so many people choose to live alone, and why some people still turn to suicide or violent crime,” continues Kotilainen.

“When daily bread is pretty much guaranteed for all of us, what is wrong? To Paavo, religion gave belief in the future. Now the churches are only full at Christmas or christenings. Paavo would ask, ‘Don’t people believe in anything?'”

For this contemporary Paavo, the traditional values expressed by Runeberg’s character have not lost their potency. In Saarijärvi the qualities of sisu, of dealing head-on with basic hardships, and of faith in the future are at least nominally maintained.

“Runeberg’s themes are always topical,” insists Kotilainen. “Love, sorrow, individual fate, love for one’s neighbour, community class differences, the description of nature – to us Runeberg is a cornerstone of national literature in the same way as Homer is to the Greeks.”