One-third of all Finnish young people are into Japanese pop culture, including music, fashion, cartoons and more.

Katariina Alainen (right) and Hanna Mustapää in line before a concert: Tavastia Club now forbids queuing up earlier than three hours in advance, since J-rock fans had taken to waiting outside overnight.

Japanese pop culture is “in” among Finnish young people. Hundreds of fans – most of them teenage girls – queue up every time Helsinki receives a visit from a Japanese rock band.

The line to get into Tavastia Club, one of Helsinki”s best-known music halls, stretches around the block. An assortment of mostly teenage girls waits to be admitted.

Some are dressed in Victorian-inspired Lolita dresses, making the girls look like old-fashioned dolls, with lots of lace and trim. Other girls shun this popular Japanese street fashion, preferring to dye parts or all of their hair bright colours.

When we show up, performing artist Miyavi is ready to stir the waiting crowd. Abingdon Boys School is another act that has appeared recently on the same stage. Japanese rock music, or J-rock, is a huge hit among Finnish youngsters.

“Of course the music interests me, but really what is so appealing is the combination of style and appearance,” explains Hanna Mustapää. The eighteen-year-old has been listening to J-rock for some four years.

J-rockers that perform in what’s called the Visual Kei subgenre are known for their outrageous outfits – men dress like women or wear otherwise fantastical apparel – and for their stage shows, which can easily combine classical music, hard rock and folk.

The lyrics are largely in Japanese, but Mustapää doesn’t mind.

“I look online for translations into English or Finnish,” she says. “Fans that understand Japanese translate the songs on different websites.” 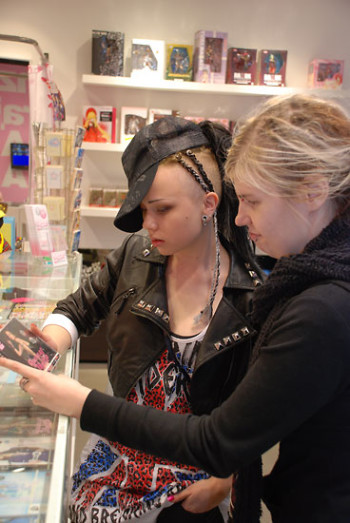 “It’s hard to give an exact figure of how many J-rock fans there are,” says Katariina Alainen, JrockSuomi’s vice president. “But a recent academic study indicated that about one-third of Finnish youngsters are currently into some form of Japanese pop culture, be it Manga comics, fashion or music.”

While the connection between Finland and Japan may seem random at first, a cross-culture chord has been struck.

“J-rock is hard to categorise, which is what makes it so interesting,” says Alainen. “We’ve all been fed American culture for so long that we want to try something new. The Japanese do things so differently, which is really inspiring.”

“I remember friends telling me something like: ‘My niece is really into this weird Japanese stuff, what’s this all about?'” recalls Katja Valaskivi, a media researcher at the University of Tampere.

Around 2002, Valaskivi began noticing that Japanese pop culture – music, cartoons, fashion and games – was making real headway with Finnish youngsters. Thanks to the internet, the fascination spread. Teenagers told their friends, who told their friends, and so on.

“All kids want to be different, yet they also want to belong,” says Valaskivi. “Japanese pop culture is a perfect way to express both needs.”

This year the adjunct professor published a comprehensive study on the growth of Japanese pop culture in Finland. “Japanese storylines respond to the lives of today’s youth. Rather than have the usual ‘happy endings’, these tales often show that life is complicated.

“Because of the variety of pop culture that young people can choose from, they’re able to pick those things they like, and reject those they don’t. They get hooked on something and show their expertise. This way they feel connected to a bigger group.”