As2wrists Dance Company takes its improvised style of tango from Finland to Argentina, the genre’s country of origin – and people love it.

Tango on the edge: Minna Tuovinen and Martin Heslop approach tango with ideas for improvisation rather than a set of fixed steps.

The subtly surreal titles that As2wrists Dance Company gives its choreographies – how about Tango for the Emotionally Famous or Tango for No Body – hint at the way they find fascinating new angles for exploring the favourite genre of both Finland and Argentina.

Choreographers and dancers Minna Tuovinen and Martin Heslop of Finnish dance company As2wrists (pronounced “as tourists”) export Finnish dance to faraway countries. They have lived, performed and taught in Buenos Aires, Argentina several times for periods of three months to more than a year.

They took Tango for the Emotionally Famous, a dance piece for four contemporary dancers, to Argentina several years ago. A theatrical performance with a twist of tango, it got a lot of space in Argentinean media, with articles in the five biggest newspapers. Tuovinen says it’s only natural that they took the performance to the birthplace of tango.

“We wanted to see what Argentineans made of our thoughts about where tango could be heading,” she says. “Because we’re outsiders to the tradition, it’s easier for us to look for new paths.” Both critics and audiences loved the piece.

Tuovinen and English-born Heslop continue to explore possibilities for combining contemporary dance and tango in their own work. “We see tango as a pure way of communicating through two or more bodies,” says Heslop. 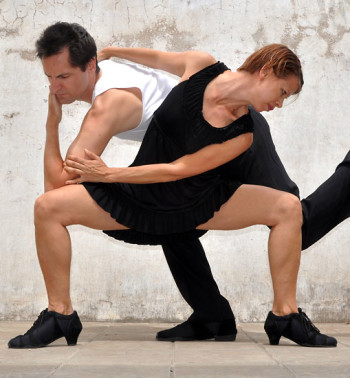 Heslop and Tuovinen “see tango as a pure way of communicating through two or more bodies.”Photo: Martin Heslop

Performances and workshops have taken them all over South America. One typical workshop was held in Bahia Blanca, south of Buenos Aires, for a professional dance company called Cuatroycuarto. It aimed to widen the dancers’ professional skills and enlarge their possibilities to work within their community.

During the workshop, all nine company members composed short solo pieces for themselves, to be performed in workshop demonstrations. Topping it off was an evening of dance entitled Tango for No Body, choreographed by Tuovinen and Heslop. “We think we’ve been successful in incorporating tango and contemporary dance in an interesting way,” notes Tuovinen.

In their teaching, Tuovinen and Heslop utilise a method called Improtango, which they themselves devised. Improtango takes the best parts of contemporary, improvisational and tango techniques. “We are trying to make tango more accessible to contemporary people,” explains Heslop. “The problem at the moment is that the tango is generally taught as a set of fixed steps, whereas we teach it as ideas for improvisation.”

As2wrists takes the clichés, cultural baggage and blatant sexism that are inherent in Argentine tango and create something new. This proves both easy and difficult. “In its essence,” says Heslop, “tango is a few beautifully simple ideas that, when combined in improvisation, become a fascinatingly rich and complex dance that takes years to master.”

Minna Tuovinen and English-born Martin Heslop have been working together since the 1990s, when the couple met as students at the Laban Centre in London. They formed As2wrists Dance Company in 1999. Together, they’ve created and staged more than 30 dance performances all over the world. When in Finland they’ve worked as lecturers at the Theatre Academy in Helsinki.