Don’t fear what is different – look at what we all have in common, writes singer Emma Salokoski (includes video clip).

Emma Salokoski feels that her contact with other cultures as a child showed her the uplifting value of meeting people who see the world from a different point of view.

It’s natural to fear what is different, but we can’t let that stop us from seeing what we all have in common, writes singer Emma Salokoski. The popular performer (video clip below) tells us about her childhood and how she became aware that such a thing as racism exists.

When I was in grade six in school, one of our assignments was a project about African countries. It formed part of that new kind of studying – you know, where you work independently instead of someone feeding you facts. I guess most of it was copying bits of various reference books and then making sure to decorate your report really nicely.

I chose South Africa and Namibia. Something about them made me more enthusiastic than I had been in other projects. I wrote about natural riches, wide-open deserts, chiefs in Amboland and, of course, apartheid. This was back in the days when Namibia had yet to achieve independence and Nelson Mandela was still in prison. I went and saw the film Cry Freedom and shed bitter tears about the injustices it portrayed. I couldn’t understand how such evil could exist in the world.

The warmth of a different perspective 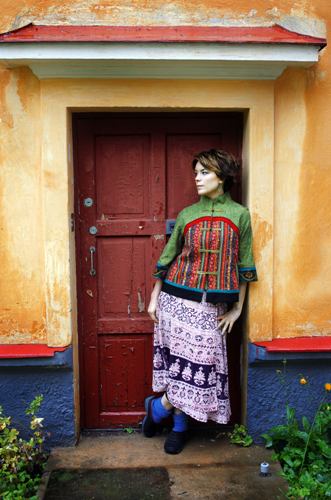 Salokoski grew up in a bilingual family speaking both of Finland’s official languages: Finnish and Swedish. Photo: Cata Portin

At the time, my mother was working as an anthropologist doing Africa-related research. Her colleagues often visited us; some of them were members of SWAPO, Namibian freedom fighters in exile. I remember that one guest made a big impression on me by mimicking an astonishing range of animal calls and cries.

I think that my contact with these people was what allowed me to empathise so deeply with South Africa’s struggle for freedom. At that time I must have been a bit different than most kids my age. My classmates were dressing in Lacoste shirts and deck shoes and spending most of their time gossiping about the latest party.

I didn’t really fit in. I had strange ideas and listened to different music. My chatter about supporting justice and opposing racism fell on deaf ears. It just wasn’t cool to preach about colonialism and segregation if you were a nerd and you wore the wrong kind of clothes.

It got worse as my early teen years progressed. Then the gossip was about the latest punch-up with the Roma down at the railway station. And it wasn’t pretty to listen to. One time a guy came up to me and said, “You probably think it’s racist to dislike the Gypsies.” When I said yes, he let out a burst of disparaging laughter.

Fights with the Roma were the only multicultural encounters those guys had. They’d never experienced the warmth of meeting people who see the world from a completely different perspective, never been uplifted by the beat of their music, never listened to their stories or seen their pictures.

See the heart within

See Helsinki scenery in Emma Salokoski’s video of Veden alla (Underwater). The song bounced to the top of the iTunes download list after being performed on TV in November 2010.

The tone of the public discussion about immigrants lately has got me worried. Worried and confused. I thought racism was a thing of the past. I thought apartheid had been extinguished 20 years ago. But it lives on like a dark cloud, like a smouldering fire under the forest floor.

Racism exists in us all. Sometimes it flares up and takes on frightening populistic features, and can even become something close to a generally accepted attitude.

We have to keep alert. It’s natural to fear what is different. That’s why we have to fight to make the unknown familiar. Learn about other people’s customs and, moreover, get to know people who are different. We have to see what is different, but also what is the same: the heart that beats within every single person.

Maybe we have to leave our comfort zone to see other people’s hearts, but I submit that we will be enriched by doing so.

A version of this article originally appeared in magazine HelsinginTaidemuseo.fi, issue 2/2010.