At the very centre of Helsinki, urban gardening sprouts amid disused railway tracks.

Onions grow accustomed to their new home in the first planting box of the new Kääntöpöytä (Turntable) greenhouse and café in Helsinki.

At the very centre of Helsinki green shoots of urban gardening are sprouting from the tracks of a former railway depot. 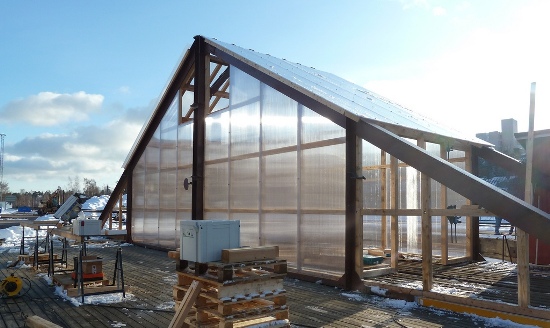 Early days: The greenhouse took shape over the tracks of an old railway turntable before the snow melted.Photo: Päivi Raivio/Dodo

“We’ve calculated that this spot is actually the geographical centre of Helsinki,” says Kirmo Kivelä, one of the driving forces behind Kääntöpöytä (Turntable), a new and unusual city gardening area run by urban environmental organisation Dodo.

We’re standing in a disused rail yard just south of Pasila Station. Trains rattle past on another, raised array of tracks less than 100 metres away, just beyond a set of buildings that used to house rail offices and workshops where locomotives were maintained.

Now the same buildings contain office space for architects, graphic designers and other creative types, not to mention an indoor rock-climbing centre. The turntable, a rotating stretch of track, was formerly used to turn locomotives around. Now a greenhouse has been built over the track, and the rest of the area given over to café tables and planting boxes that Kivelä calls “intensive organic urban gardening.”

The café pre-debuted in 2011 in a different incarnation, as a pop-up restaurant on Helsinki’s Restaurant Day. It’s open two or three days a week in 2012, serving meals that pack a green punch. City gardening workshops take place at regular intervals, not to mention a beekeeping workshop. 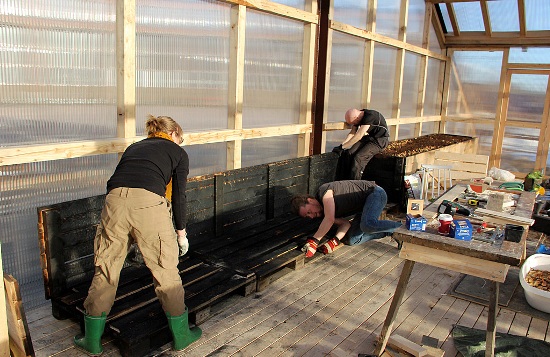 The greenhouse, shaped like an upward-pointing triangle, took shape over the turntable’s original frame, which is a protected structure. “Dodo is all about openness and democracy,” says architect Joseph Mulcahy, an Englishman who has lived in Finland for five years. “But how do you make a structure democratic? We went down the path of an elemental structure with no hidden joints.”

The greenhouse is made of wood and transparent polycarbonate, held together with nuts and bolts. Two carpenters and several helpers built the structure over a winter fortnight when the ground was still covered with snow and the gardening season seemed a faraway dream.

Turntable forms a cultural and social project as well as an agricultural one. The organisers hope that it and Dodo’s other urban gardening projects will help show the way to more growing opportunities in a city where there aren’t enough municipal garden plots to go around. Kivelä and his colleagues also offer advice and help obtain materials for gardening in boxes and bags, on balconies and windowsills, in apartment building courtyards and just about any other place in the city where something will grow.