Hands in the clay

Anu Pentik tells the rags-to-riches story of her famous design brand: “Even in difficult times, the only option was to go forward.”

"I still have the same burning urge to create things as in the early 1970s," Pentik says.

When Anu Pentik tells the story of how her brand grew from a homemaker’s hobby into a hugely successful design company, it’s difficult to avoid thinking of Cinderella.

Anu Pentik, born Eeva Anneli Pasi in 1942, has travelled an eventful journey from daughter of a working-class family in the southeastern town of Kuusankoski to artistic director of the Pentik design company. Many of her dreams have come true. Today she can concentrate on creating ceramic art, as the family company has delegated management duties to the younger generation.

“I still have the same burning urge to create things as in the early 1970s,” Pentik says. “However, the difference is that over the course of about 40 years, a homemaker’s hobby has evolved into a very healthy business.”

Pentik made its breakthrough soon after it started as a little workshop in the early 1970s. The national press created a Cinderella story about a crafts designer who moved up north to Posio, Lapland, from southern Finland and created ceramics inspired by the northern wilderness.

Her knobbly candle holders were considered fascinatingly different. Anu recalls that the department store Stockmann ordered as many of them as she managed to make.

As a mother of young children, she made ceramics at night in the sauna of the family home. Her husband, Topi Pentikäinen, a physical education teacher, dipped candles in the yard during the summers.

“We were poor and lived in the middle of nowhere,” she remembers. “We didn’t know anything about making ceramics, but were immensely enthusiastic.”

The couple had ambition and wild visions to spare. They created their own applied arts company from nothing, producing ceramics, leather accessories and, for a while, even furniture.

“We’ve needed lots of creative craziness, endurance and people skills,” Anu says. “In addition to managing the company over all these years, I’ve always wanted to keep designing myself and sinking my hands into the clay. We’ve done a lot of hard work, and have spent pretty much our whole lives on it.” 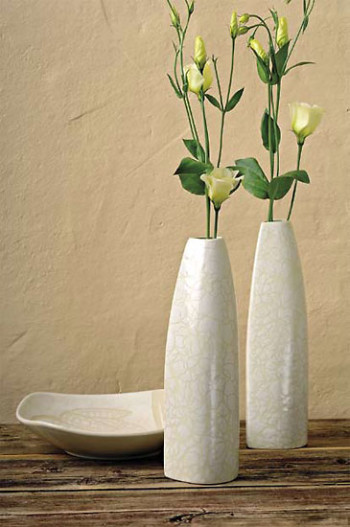 The 1970s formed an opportune period for a ceramics company. The only real competitor was the giant Arabia corporation, and imports were negligible compared to today. At first the couple created a limited partnership company called Anu Pentikäinen, but soon shortened the name to the catchier Pentik. The fact that Pentik took off in Posio was a decisive factor. Northern Finland brought a positive image to the company and the location guaranteed peace and quiet to concentrate on work.

The ceramics factory on “Pentik Hill” was inaugurated in 1974. The era was marked by intense growth. The company’s designers included Peter Winqist, Marja Mykkänen, Irja Leimu and the Korean-born Suku Park. One of Pentik’s secrets of success has been that Anu Pentik has wanted to make crockery for regular Finnish consumers. Cosiness has been more important than being trendy.

Anu emphasises that the company would not exist at all without her husband.

“Topi has always been able to think grand thoughts. When I was running around in the world, he took care of the home and the children. He also served as managing director for decades. I’m grateful that our marriage has lasted.”

She is also happy that the couple’s children have joined the company and manage it with skill.

The successful company has seen hard times, too. In the early 1990s, Pentik was on the verge of bankruptcy. Everything except ceramics was trimmed away.

“Even in the difficult times, we saw that our only alternative was to go forward. We didn’t want to let our employees down. During those years, we learnt that a company must be managed through careful accounting.”

The staff members have been happy at Pentik, with most working there for many years. Anu underlines that the company has made its goals clear to everybody; it has trusted its employees and taken care of them.

“We’ve always been open with the staff about the company’s profits and debt,” she says.

For about a decade, the Pentik range has included glass and wooden objects as well as textiles made in Asia. Keeping the ceramics production in Posio has been a matter of honour for the family.

“In Posio, we produce limited series that show the handiwork. I believe strongly that other companies can keep a part of their production in Finland in the future, too.”