Before embarking on her singing career, Ritva Auvinen studied physical education at Helsinki University. She believes this laid the basis for her enduring fitness as a singer.

Soprano Ritva Auvinen forms a legend of the Finnish opera scene with her illustrious and uncommonly long career. Now past her 80th birthday, she continues to delight listeners. What’s the key to the Auvinen vocal miracle?

In October 2012, a crowd came to hear Auvinen sing in her 80th-birthday concert at the Helsinki Music Centre. Excellent vocal material, dazzling singing technique and strong physical condition – do these explain the longevity and span of her career? “Well, I’d agree, but I’d add one important thing,” replies Auvinen. “I inherited strong vocal cords from my father. Two different doctors have told me that my vocal cords do not seem to have aged at all.”

Auvinen’s reputation is strongly linked to the first wave of international interest in Finnish operas in the late 1970s and early 1980s. An astonishing number of new Finnish operas were produced during that era, including two folksy works known in Finland as “fur hat operas”: Joonas Kokkonen’s The Last Temptations (1975) and Aulis Sallinen’s The Red Line (1978). Both gained international success.

The Last Temptations, a fictionalised, tragic biography of revivalist preacher Paavo Ruotsalainen, premiered at the Finnish National Opera in October 1975. Legendary bass Martti Talvela sang the lead role, with Auvinen co-starring as his wife, Riitta. She also frequently performed one of the main roles in The Red Line, that of Riikka, mother of a poor crofter family.

The road to the opera 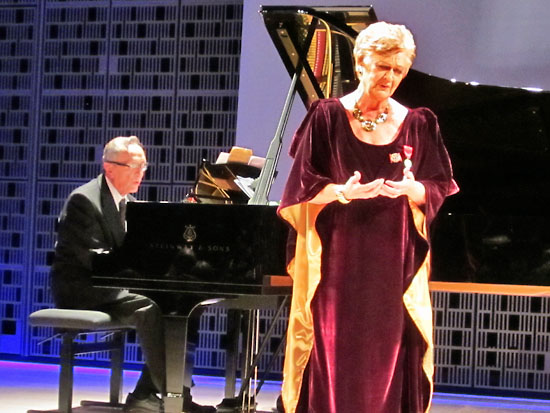 At her 80th-birthday concert at Helsinki Music Centre, Ritva Auvinen (born in 1932) sang an encore together with her older brother Raimo. The melody inspired nostalgia and a standing ovation.Photo: Marja Peura

Before The Last Temptations, Auvinen earned her spurs at Finnish provincial opera houses in the cities of Lahti, Tampere and Jyväskylä. These gigs hardly paid at all, so she bankrolled her passion for opera by working as a gym teacher and swimming instructor. As a girl, Auvinen could never have imagined a career as an opera singer. She recalls being a shy Karelian country girl who was “mad” about the pop songs of the day. Young Ritva particularly loved the Italian and German schlagers of the 1950s, which she sang at home, accompanying herself by “banging on the piano” in a completely homemade style.

Her older brother Raimo, an amateur singer, introduced her to opera, which quickly became a new obsession. However, it took quite some time before she began to systematically train her voice. Entering the Sibelius Academy in Helsinki, she studied under the renowned Mirjam Helin – now the namesake of Finland’s most prestigious singing competition – whom Auvinen describes as a wonderful teacher who was ideal for her. But first Auvinen studied to become a gym teacher at the Helsinki University, which she believes laid the basis for her own enduring fitness as a singer.

Sing strongly and carry an axe 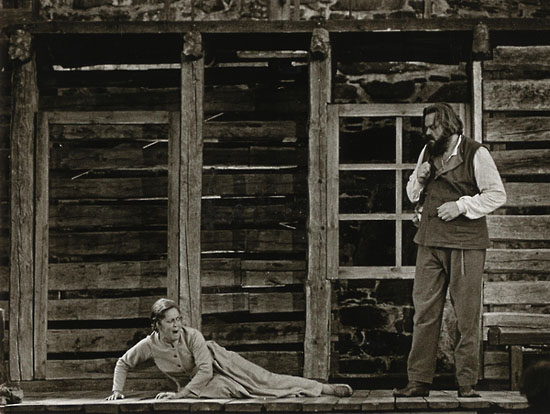 When Auvinen performed her two great roles as strong Finnish country women, Riitta and Riikka, she not only sang radiantly and expressively, she also carried herself with elegant posture and a spring in her step.

“There was an unusual atmosphere during the rehearsals for the premiere of The Last Temptations, with people in the choir often weeping,” she says. “Some of them might have even gotten religion. I didn’t feel like crying, though. The director, Sakari Puurunen, told me that Riitta had to be a down-to-earth character, not too melodramatic.”

I recall a performance of The Last Temptations at the Savonlinna Opera Festival, where Auvinen, as Riitta, threw an axe threateningly close to Martti Talvela, who was playing Riitta’s husband Paavo, leaving for a preaching mission. Paavo was taking with him the family’s only loaf of rye bread, which infuriated the temperamental Riitta. “Luckily nobody got killed,” Auvinen says with a chuckle as she remembers how audiences were startled by her angry axe toss. This gym teacher has wrists of iron.

A lifetime of performing 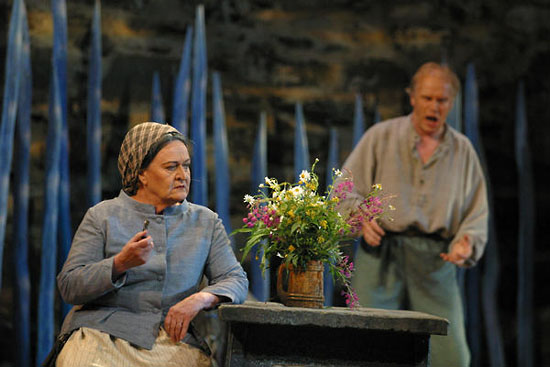 Starting in 1975, Auvinen became a regular guest soloist at the Finnish National Opera. Yet she was never signed to a staff contract. Still, she has performed some 70 opera roles, all in Finnish productions.

“I’ve always been a freelance artist,” she says. “I didn’t want to have an agent, because I was afraid of becoming an agent’s slave. I went to Germany a couple of times for auditions, and I was worried that I might have to sign a contract.”

Auvinen has held numerous solo recitals abroad, and has also performed at major foreign opera houses, singing in seven cities as part of the National Opera’s successful international tours in the late 1970s and early 1980s. The pinnacle of her career, she says, was performing The Last Temptations at New York’s Metropolitan Opera in 1983.

Auvinen still sees herself as a shy Karelian girl. With her modest personality, she has no patience for diva behaviour.

Onstage, Auvinen has always managed to shed her natural modesty and become a dazzling performer. She creates powerful, personal interpretations, but says she is unable to explain where they come from. They have always just seemed clear to her. “It must be intuition,” she says simply.

Auvinen served as a vocal teacher for 15 years at the Sibelius Academy and at conservatories in Helsinki. She continues to share the secrets of her vocal miracle with private students, and keeps performing concerts for the rest of us.