Who are the Northern Governors? How’s their debut album? And what does a Finnish band have to do with Nigeria?

Family affair: Most of the members of the supergroup Northern Governors come from the same extended family.

Who are the Northern Governors? Where are their musical roots? How is their debut album? And what does a Finnish band have to do with Nigeria?

Search online for “Northern Governors” and most of the references will be to Nigerian politics – but that’s set to change with the arrival of a Finnish soul-jazz supergroup by that name. Their debut album, This is the Northern Governors, appeared in late March 2012 on the legendary Blue Note label.

So does the band’s name have anything to do with Nigeria? Well, yes and no.

One of the album’s centrepieces – and a show-stopper during the band’s recent concert at the Turku Jazz Festival – is the infectious, horn-driven “Hela Huti”.

“That’s my tribute to the father of Afrobeat, Fela Kuti, who happened to be Nigerian,” says bandleader J.K. Louhivuori before the gig.

“But that’s just a coincidence!” protests keyboardist and vocalist Tuomo Prättälä with a grin.

“There are no coincidences; it’s all part of a master plan,” says Louhivuori with a wink, enjoying the playful, spiritual tendencies of this group, which he calls “easily the most fun band I’ve ever been in.”

And he’s been in a lot of them – as have most of the Governors. 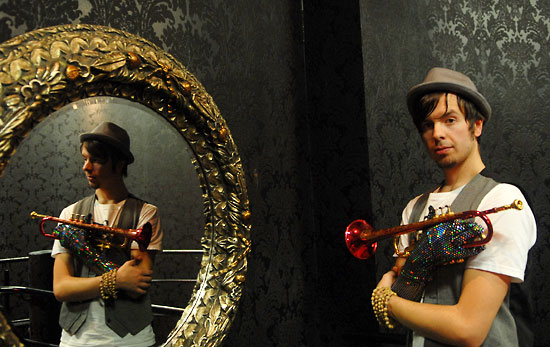 Besides playing actively in his two other ensembles (the jazzy Sun Trio and Big Blue), multi-instrumentalist Louhivuori is in hot demand as a producer, arranger, session musician, playing with the likes of Hugh Masekela and Randy Brecker.

Prättälä and Louhivuori are best known, though, for their work with two of Finland’s highest-profile female vocalists: Emma Salokoski and Yona. Louhivuori wrote, arranged and played much of Yona’s first two albums while Prättälä co-led Salokoski’s long-running band Quintessence before his successful solo career.

Louhivuori also happens to be Yona’s ex-husband and Salokoski’s brother-in-law – in fact the night the Governors ruled Turku, his brother and collaborator Olavi was backing Salokoski in Helsinki.

The tangled musical family tree doesn’t stop there: nearly all the Northern Governors are related to each other.

Louhivuori and Prättälä are cousins of bassist Osmo Ikonen (who also plays with pop-rock band Sunrise Avenue), while guitarist and singer Petteri Sariola and drummer Jyri Sariola are his second cousins. The back-up vocalists are sisters of Louhivuori and Ikonen.

They’re all descendents of Marjatta Pokela, composer of many beloved Finnish children’s songs, and Martti Pokela, master of the national instrument, the kantele, and founder of the Sibelius Academy Folk Department.

Coming from this kind of true-blue musical tradition, it’s startling how passionate the new generation is about African and American music. Along with Fela, their debut album honours Louhivuori heroes such as Prince, Miles Davis and Frank Zappa.

From folk to funk 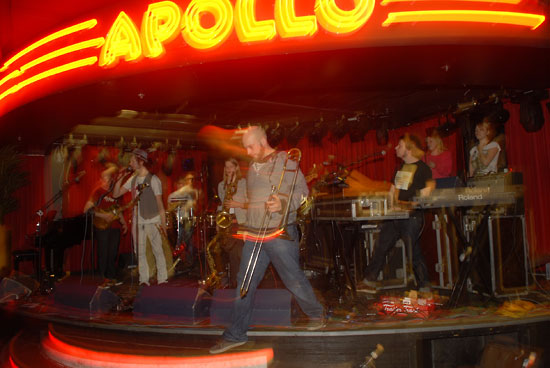 On Easter, many of the band members and their relatives (including four Louhivuoris and five Ikonens) honour another tradition with a gospel and soul concert at the Lutheran Church in their hometown of Jyväskylä.

“J.K. wrote most of the songs on the album with the rest of us adding a few bits,” explains Prättälä. “But a couple of the songs grew out of jam sessions.” These include the opening slice of Prince-ly funk, “Zero Point,” which starts with a robotic quote from electronic pioneer Nikola Tesla.

That kicks off an immaculately produced album with sleek horn charts, electronics and choral harmonies. After this, the live show (with an expanded line-up of 10 people) is a pleasant shock: rough and rowdy, heavy on the groove, improvisation and goofy gyrating from the backup singers.

The final encore is “Happy Souls,” the band’s gospel-tinged first single, featuring solos from everyone, including spacey Moog synthesizer squiggles from Prättälä. It ends with big grins all around, the dance-floor crowd begging for more.

This is an intelligent party band with infectious enthusiasm – catch them live if you can.