The Helsinki-based creative duo, known as COMPANY, has been successfully designing, exhibiting and touring since 2000.

Korean-born, Finland-based designer Aamu Song poses outside the workshop of a matryoshka doll artisan in Russia.

Finnish-Korean couple Johan Olin and Aamu Song form one of the most ubiquitous presences on the current Finnish art scene.

Their designs and installations attract a wide variety of audiences, and spectators may also become performers. In one famous work, Reddress,you can slip into one of the pockets of a colossal red gown spread out on the ground and listen to live music.

The Helsinki-based creative duo, known as COMPANY, has been successfully designing, exhibiting and touring since 2000. It all began when Song and Olin were hit with the thunderbolt during their student years, and since then this design collective has consistently done well.

Some of their projects have spellbound a set of international loyal COMPANY devotees. For a few years, the spotlight has shone on their humoristic set of sculptures Sounds of Sea in Auckland, New Zealand, and on the now world-famous Reddress performance installation in the shape of a giant dress. In Reddress, 238 members of the audience can nestle into huge pockets in the hem of the dress’s 550 metres of fabric and gaze up at a singer or musician.

Song explains how important it is for her to give the audience not just a close, fun experience through designs and ideas, but also a kind of “happy energy,” a very visible characteristic in most of COMPANY’s products and projects. In 2010, COMPANY received Finland’s prestigious State Prize for Design. 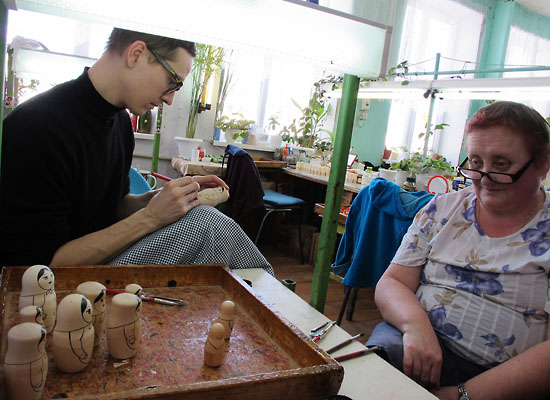 Designer Johan Olin, one half of COMPANY, confers with a Russian matryoshka doll maker at her workplace.Photo: Courtesy of Kiasma

COMPANY recently got back from Russia where they were working on their latest exhibition, Secrets of Russia – a project that was born from Top Secrets of Finland, a magnificent sales exhibition celebrating the traditional skills and local materials of Finnish artisans.

“We’ve been doing these Secrets projects since 2007,” says Olin. “Our process begins by visiting manufacturers and learning their traditions and skill sets. We then design new products based on their traditions.”

According to Song, they seldom try to find a new idea but rather “try to learn from masters who have been living and developing one craft for years and that often belong to a long line of craftsmanship.” Both Song and Olin enjoy visiting remote places and seeking out artisans.

Their ideas are based on the way they like to live; they work with “good people and travel to exotic places.” Song adds, “To work with people who like what you do is almost like heaven.”

Secrets of Finland subsequently gave way to the Secrets of Helsinki, and in 2011 Song and Olin embarked on a quest to find manufacturers and artisans working within the borders of Helsinki.

The results of their journey to Russia form the basis of a show at Helsinki’s Kiasma Museum of Contemporary Art. Secrets of Russia was on display within a larger exhibition called Camouflage.

COMPANY’s products have found a permanent home near Kiasma: Salakauppa (Secret Shop), a cube-shaped walk-in kiosk with glass walls, stands on the corner by the Main Post Office, in plain view from the Kiasma entrance. It beckons to people looking to discover – or purchase – Song and Olin’s creations, the results of the couple’s numerous trips.