Jarno “Stakula” Sarkula’s massive beard and top hat play a big role in the image of his band, Alamaailman Vasarat.

Jarno “Stakula” Sarkula appears to be an ambassador from another time – or planet. Looking like a Victorian circus director, he’s perspiring slightly, having just arrived in downtown Helsinki by ferry from the fortress island of Suomenlinna, where he’s been moving into a new home near his studio.

There, his band Alamaailman Vasarat recorded parts of its sixth album, Valta. The disc is out just in time for the group’s 15th anniversary.

Most of the album was recorded at Magnusborg studio in Porvoo, east of Helsinki – a place full of visual-musical stimuli. “It’s an old wooden mansion on top of a hill,” explains Stakula. “There’s this big hall with old instruments lying around, including a broken-down piano from the late 1800s that suits our sound just right.”

At times, that sound suggests a house band at a haunted gothic castle, or knights riding out to battle with fanfares and flags, or a wild eastern European village carnival. “When we’re composing and rehearsing songs, it’s easier if we have some kind of visual image in mind,” says Stakula, his eyes twinkling.

“Like maybe we’re a New Orleans street band who’ve been handed classical sheet music and we’re playing it strong and full-on with heavy drums because we have no clue about classical music! Or maybe there’s a circus of the undead on this side and some good-looking grannies on this side and they’re trying to play together, but they can’t because there’s a hippo in between them – and so on.” 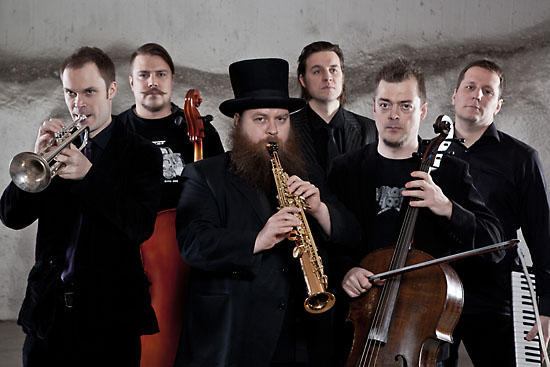 Essentially a six-man rock band without guitar, bass or vocals, the group uses a broad palette of musical paints, from klezmer, ska and punk to jazz, tango and polka, not forgetting Arabic, Balkan and Roma styles.

Yet while some other groups throw many types of music into a kitchen-sink mess, Alamaailman Vasarat weaves them into a distinctive sound that’s remained consistent through many albums and personnel changes.

Central to the sound are exotic instruments such as Stakula’s sopranino sax, Indian oboe and custom-made Tubax – a hybrid tuba and saxophone with a dungeon-deep sound. Other band members play a pump organ, a melodica and a homemade theremin with a copper antenna shaped like a fish. (A theremin is an electronic instrument whose tone you control by moving your hands in front of antennas.)

Some might categorise the resulting sound as underground cabaret or steampunk, or lump them in with groups like Gogol Bordello or Hazmat Modine. Yet the Finnish band’s all-instrumental format makes their humour more profound and less tiring.

From Tolkien to iPhone 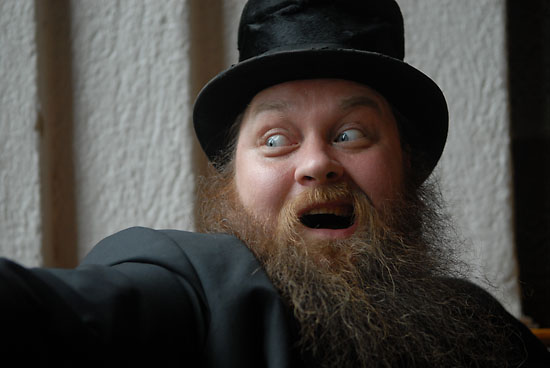 The new album features more touches of both classical and metal. Those converge in the band’s double-barrelled electric cello attack – which is reminiscent of another odd Finnish band, Apocalyptica, that began exploring this sound around the same time.

Alamaailman Vasarat formed in the early 1990s as a duo of buskers in the Helsinki Metro – hence the subterranean name. Stakula says it may have been inspired by the Hammer of the Underworld, a weapon wielded by the giant Morgoth in The Lord of the Rings – “though we didn’t realise it at the time.”

At the turn of the millennium, they began touring Europe, North America and Japan and released their debut, which became an immediate hit on the World Music Chart Europe. So was their fifth release, 2009’s Huuro Kolkko, a playful concept album about a mythical explorer from the early 1900s. In 2010 they released an iPhone game.

Sarkula often creates compositions and sound design for games, films and videos, all of which feed into the band’s cinematic sound. The final track on Valta features wine drops falling from a great height in the big hall at the Magnusborg studio.

“It made a logarithmic pattern that was quite harsh yet natural; the kind that you can’t create with samples,” he says. “It was kind of bad wine, but it didn’t go to waste!”