Between memory and forgetting

Elina Hirvonen talks about her critically acclaimed novel When I Forgot, which offers a mix of Finnish and American perspectives on September 11, Iraq, Vietnam and the Second World War – and on love.

Passing through Helsinki: Elina Hirvonen, author of the critically acclaimed novel When I Forgot, moved back to Finland after two years in Zambia, but left for North America less than two weeks later to take part in literary festivals.

When I Forgot, a novel by Finnish author, journalist and documentary filmmaker Elina Hirvonen, was released in North America to critical acclaim in May. We catch up with her as she prepares for literary events in New York, Toronto and Ottawa.

Elina Hirvonen’s book When I Forgot was published in North America and made the cover of the New York Times Book Review in May 2009, sending a palpable buzz through the Finnish literary world. A cover story in such a prominent publication tends to make people take notice, at home and abroad.

Finland’s largest newspaper, Helsingin Sanomat, alerted folks back home to the article. The New York Times Book Review piece and the accompanying visibility were considered a triumph for not only Hirvonen, but all of Finnish literature.

Hirvonen herself was far away at the time, in Zambia. 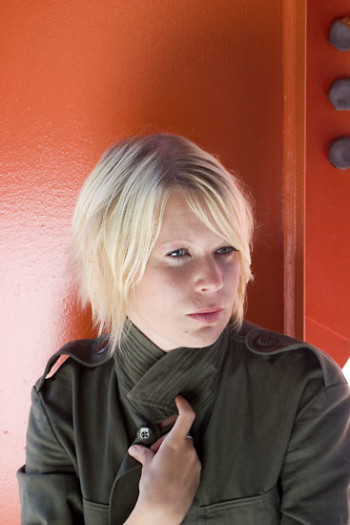 Let’s backtrack for a minute. When I Forgot appeared in Finnish in 2005 and was shortlisted for the high-powered Finlandia Prize, a big step for a début novel. The tenderly told story portrays events stretching from the time of the World Trade Center attacks and the war in Iraq back through Vietnam and the Second World War.

The narrator, Helsinki journalist Anna, wants only to “escape from memory.” Her American boyfriend, literature professor Ian, believes that “only by remembering can we understand something about ourselves.” However, there are things she can’t forget, and he has a terrible memory.

Anna’s brother Joona suffers from mental illness and lives in a hospital. She sifts through her sometimes painful past, her relationship to Joona, her understanding of her parents and what she knows of their pasts. She also revisits the start of her relationship with Ian and his stories about his own childhood. Several chronologies interweave as Hirvonen presents the reader with details that form pieces of a jigsaw puzzle.

Love is one element – the expressions it achieves between different combinations of characters. The story also follows the effects of the various wars. Long after they are over, their influences echo through the generations.

Because When I Forgot mentions September 11 and Iraq and includes an American character whose father returned from Vietnam with post-traumatic stress disorder, Hirvonen felt apprehensive about the North American release. “I thought maybe people would feel like these were their experiences and nobody else’s,” she says.

Yet the timing seems right: Enough years have passed to give Americans a certain distance from September 11, and the political landscape looks different today. People can begin to remember.

As Anna goes through her memories, we see how her brother perceives September 11. “When 9/11 happened I was making a documentary film about a guy who suffered from schizophrenia,” says Hirvonen. “That’s one reason it ended up in the book.

“It really got under his skin. He identified with everyone who was in the war.” In the book, Joona escapes from the mental hospital to go to a demonstration against the war in Iraq.

Hirvonen succeeds in putting us in Joona’s confused mind. We understand his logic and wonder whether the “normal” world is really normal.

What’s in a name 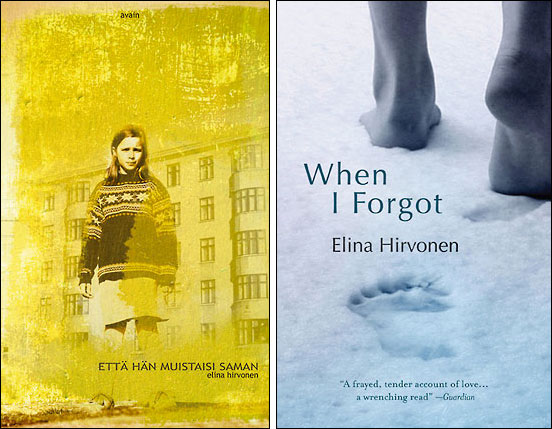 The title of the English version is not a direct translation, but it manages to convey the same effect.© Avain and Tin House Books

The book’s English and Finnish titles are very different, but both manage to convey the same effect. When I Forgot started out as Että hän muistaisi saman, literally “That he would remember the same”. Thinking of a happy, early-childhood Christmas before her family started to collapse, Anna pines, “I hoped that Joona would remember the same.”

“An American friend of mine in Finland came up with When I Forgot,” says Hirvonen. “Even though it’s different, I think it fits the theme of the book.

“It was important for the title to have something about remembering or forgetting, and I wanted it to be a sentence or part of one. I’m always interested in titles like that; they make me want to read and find out where the sentence comes from.”

Reflecting on life in Zambia

When this article goes live, Hirvonen will be on her way to Ottawa, Toronto and New York to appear at literary events. Before that she’d been in Helsinki for less than two weeks, having just returned from two years in Zambia.

Instead of flying home, she and her husband drove through Africa, then caught a ferry to Europe and wended their way to Finland – a three-month journey. “If you fly from one place to another, completely different place, it’s confusing,” Hirvonen says. “We wanted to have time to reflect on our life in Zambia and on moving back to Finland.”

What did she miss about Finland?

“Friends, of course,” she says. “Streetlights – in Zambia after the sun goes down it’s completely dark and it’s not considered safe to walk around. Fresh fish, rye bread, public transport, walking, forests, cycling, the sea.”

She also names “being able to disappear in a crowd,” explaining that in Zambia foreigners “get all this attention – mostly friendly, but sometimes a bit too much.”

Next book connects Finland and Africa

Hirvonen is currently writing her next novel, about a platonic friendship between a Finnish man and a Zambian woman: “The relationship is based on the fact that the man has so many more options in life than the Zambian woman does. He’s trying to help her to have more choices, maybe for selfish reasons, but still.”

The subject matter overlaps with When I Forgot. “The setting’s completely different,” Hirvonen says, “but the themes are similar: losing someone who’s important to you, trying not to feel alone and struggling with that. I still have no idea whether I’ll be able to finish the new book, or when.”