Aku Louhimies on location: The controversial Finnish director doesn’t believe that he should have to act as an ambassador for his country.

Film director Aku Louhimies shows a grimy view of Finland. It’s not everyone’s cup of tea – but he tells thisisFINLAND that his newest work, Naked Harbour, is more about hope than despair.

The name Aku Louhimies seems to pop up everywhere these days. He’s one of Finland’s most controversial directors, mostly because of his dark depiction of the Finnish society.

Entitled simply Vuosaari in Finnish, after the eastern Helsinki suburb where the film takes place, Naked Harbour premiered in Finland in February 2012. It follows closely in the footsteps of his award-winning Frozen Land (2005), which the Financial Times referred to as “one of the grimmest and [most] brutally honest portrayals of modern Finland to have hit the screens.”

The director notes that when Naked Harbour was released, the Finnish ambassador to Norway said, “It portrays all the things about Finland that I would not want to show the rest of the world.” Louhimies laughs at the statement and denies that he only portrays Finland in a bad light, yet he frowns at the idea of acting as an ambassador for his country:

“I can’t be seen as responsible for my country’s image abroad. I’m driven to portray life as I see it – especially feelings and human relations. Whereas [fellow Finnish director] Aki Kaurismäki’s films are like fairytales, mine are as realistic as possible. I like to call it the illusion of truth.”

Helsinki boy in love with Hollywood

“Naked Harbour” is a film about love, and about longing to be accepted as you are. Mikko Kouki (left) plays Pertti, a disillusioned single father.Photo: First Floor Productions

Louhimies has a long history of learning to create truthful illusions for people to watch on the big screen. From a very young age he knew he wanted to be a film director; he was fascinated by America and an ardent Charlie Chaplin fan (City Lights forms his favourite).

Louhimies studied film at Helsinki University of Art and Design and at UCLA in the US. In addition to his seven feature-length films, he has directed several critically acclaimed documentaries and his many TV series have been some of the most watched in the Finnish television history.

The director’s first features were light-hearted, romantic takes on Helsinki in the summer. But it was only after making more sinister, set-in-the-winter, uncomfortable-to-watch kind of films that he started to gain proper international praise in the art-house scene. “They love Finnish melancholia,” says Louhimies, but adds that he’s not going to limit himself to any one style. 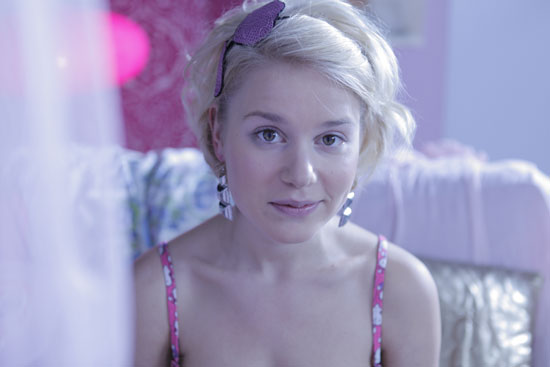 Naked Harbour is a film of “urban love stories that happen to take place in an Eastern Helsinki suburb called Vuosaari,” says Louhimies as he ponders the true meaning of the film. “I love making documentaries, but some issues, such as isolation, racism and sexual abuse, can become too unbearable to show in a real setting. When these stories are written and acted in a fictional form, they become easier to handle, easier to perceive.”

The movie certainly does have a documentary streak to it. Harshly filmed in claustrophobic settings, much of the action takes place indoors – in a hospital, a gym, saunas of all kinds, flats filled with expensive design items or grubby working-class trappings. We follow the lives of young families and lovers, and their shortcomings – unable to reach one another though connected by the same thirst for love and acceptance.

The future face of Finland

Writing and planning Naked Harbour took Louhimies and his fellow script-writers Niina Repo and Mikko Kouki (who also acts in it) several years. Although the film shows the flip side of a Western welfare state in all its despair and hopelessness – a society of one-parent families and lonely children – there is hope in the end. After building up a whirlwind of tension, the film dissipates into feelings of forgiveness and new chances – although only in the very last minutes.

In this regard, the location of the film can be seen as having something to do with the positive ending. Louhimies calls Vuosaari “the future face of Finland, with endless opportunities. After all, it’s a place where more cultures, ethnicities and social layers mix than anywhere else in Finland.”

Louhimies also takes a very positive view on the non-hierarchical structure of the Finnish society: “Almost all the scenes in Naked Harbour could work whichever way round – a father obsessed with losing weight and imposing it on his teenage son could just as well been a mother. Or the single mother dying from cancer could have been a lonely father. We didn’t specify the ethnic backgrounds of the characters either – that came through the casting.”

When asked about positive aspects, Louhimies gets very inspired by the idea of a film promoting Finland: “Yes. It could be an action thriller that takes place all over Finland – some sort of spy chase story from Lapland to the archipelago, showing the beauty of the Finnish seasons, nature, the lakes, the sea.

“But even then the story would be the most important thing – a story is the most powerful way to make an impression on someone. I would never want to make just a travel video. If I made a good story showing the best part of Finland, that would be promotion enough.”

“I can feel that greater renown for Finnish films is just around the corner,” Louhimies says. “Sweden and Denmark have paved the way for us, as has Aki Kaurismäki, of course.”

For Louhimies, a personal world breakthrough could take the form of a Hollywood remake of Frozen Land set somewhere like Detroit or Los Angeles. Or it might be an action-packed science thriller based on Risto Isomäki’s doomsday graphic novel The Sands of Sarasvati (Tammi, 2008). Or maybe it will turn out to be another art-house film with snow, saunas and elements of melancholia. Time will tell.