We meet Harri Koskinen, a famous designer who is so modest that he doesn’t even admit to being modest. 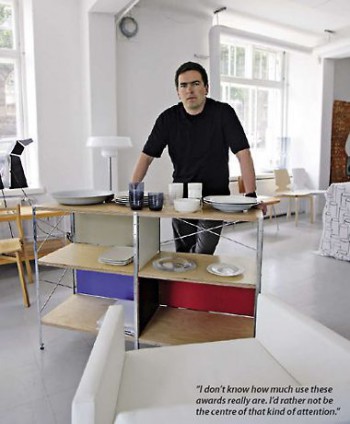 Designer Harri Koskinen poses with a few of his creations.Photo: Eastpress/Seppo J.J. Sirkka

The first impression of designer Harri Koskinen is of a quiet, well-intentioned, somewhat shy man whose life has been devoid of any unusual events. This impression is deceptive.

Lots of unusual and important things are continuously happening in Koskinen’s life. Over the past decade, he has become one of Finland’s most respected, internationally successful young designers.

He is a cosmopolitan who gets orders for work from around the globe. Yet he is indeed quiet, well-intentioned – and genuinely modest. In fact, he is so modest that he does not even admit to being modest.

“I guess it’s just being sensible,” he says.

Being sensible – along with being ambitious – is one of the main characteristics of Koskinen’s work and personality.

For instance, being sensible plays a role in designing a 300 square metre villa in the upmarket seaside town of Ekenäs (Tammisaari).

“The person who commissioned it dreams of it being the world’s most handsome villa,” says Koskinen. “I’m designing it as a team with two talented young architects. This project doesn’t have as strict a budget as there usually is on this kind of job. This situation offers us freedom and even a chance to come up with some completely new structural solutions, for instance.”

Could there be a more ideal job for a designer and architects in this world of stringent budgets?

“Well, it does cause some problems of its own,” Koskinen points out in a serious tone.

“In spite of everything, we have to preserve the sensibility and honesty of the design. The costs have to be kept within sensible limits.”

One of his favourite words is “honesty”.

“You have to have a certain kind of work ethic,” he says. “My bases of work have to be acceptable and the execution has to be honest. I have to be able to stand by them in public.”

Koskinen did not originally aim for the position in which he is now. He seems to have become a star through his own weight, without any visible creative angst, special effects, diva behaviour, noise, glitz or fanfares, which makes it seem natural and effortless.

“It’s funny to talk about it as a career,” he says, seeming embarrassed.

Koskinen’s starting point was the small village of Vahanka in Karstula,central Finland. His father was a farmer and his mother a practical nurse. Young Harri went south to the Lahti Institute of Design.

“There I became a cabinetmaker. But I was more interested in design. I planned to set up a design office – and now I have one.” 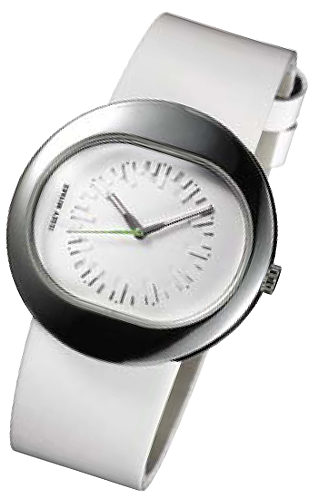 He was accepted at the University of Art and Design in Helsinki. Upon graduation at the age of 26 this budding talent was snapped up by the Iittala company, an icon of Finnish design, where he was introduced to the world of glass.

“Iittala uses designers’ names as an argument to support sales,” explains Koskinen, sounding as if he had got mixed up in something unsavoury.

“So that started my career as a name designer – sort of by accident.”

Koskinen says he has been an admirer of Finnish design legend Kaj Franck (1911-1989).

“I have said so when asked,” he says. “But Franck is not a role model for me. I never even met him. Maybe what we have in common is that Franck, like me, doesn’t like to make an unnecessary fuss about things.”

Does Koskinen find it annoying that discussions of Finnish design always seem to revolve around the same demi-gods who earned international acclaim in the 1950s and ‘60s, such as Tapio Wirkkala and Timo Sarpaneva?

“Well, not really,” says Koskinen with a smile. “It just sort makes me smile that there are so few of them to be compared to. If you could see what has been done around the world, these discussions might have a bit more of a realistic basis.”

As to his plethora of awards, Koskinen says: “At best, of course, they help me to get work, because they show a certain recognition. But I don’t know how much use they really are. They’re more just a hassle. It’s not my idea of fun to be the centre of that kind of attention.”