“A twig for you, a treat for me!” Easter witches appear on doorsteps in Finland on Palm Sunday or Easter Saturday.

Finnish Easter traditions mix religious references with customs related to the long-awaited arrival of spring. If you answer the door on the Sunday before Easter, you may be confronted by endearing little witches offering to bless your home in return for treats.

In the most popular family tradition, young children (especially girls) dress up as Easter witches, donning colourful old clothes and painting freckles on their faces. “The little witches then go from door to door, bringing willow twigs decorated with colourful feathers and crepe paper as blessings to drive away evil spirits, in return for treats,” says children’s culture expert Reeli Karimäki of the Pessi Children’s Art Centre in Vantaa, just north of Helsinki.

Like many Finnish householders, Karimäki keeps a basket of small chocolate Easter eggs ready by the door to pay off the marauding witches. Other families reward them with sweets or small change – or keep their front doors resolutely closed. 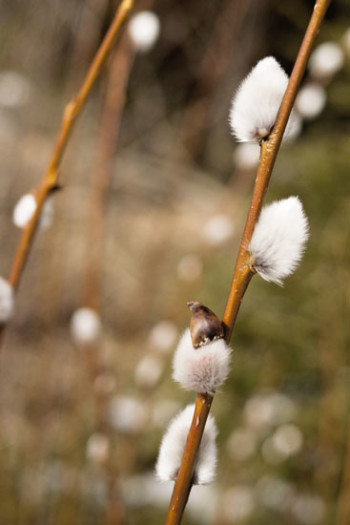 Willow twigs like this are cut and decorated by kids to give as gifts when they go door to door as Easter witches.Photo: VilleMisaki/flickr, cc by-nc-nd 2.0

The witches recite a traditional rhyme at the door: Virvon, varvon, tuoreeks terveeks, tulevaks vuodeks; vitsa sulle, palkka mulle! (In translation: I wave a twig for a fresh and healthy year ahead; a twig for you, a treat for me!)

“This Finnish children’s custom interestingly mixes two older traditions – a Russian Orthodox ritual where birch twigs originally represented the palms laid down when Jesus entered Jerusalem on Palm Sunday; and a Swedish and Western Finnish tradition in which children made fun of earlier fears that evil witches could be about on Easter Saturday,” explains Karimäki.

To this day, the little witches are more likely to roam on Easter Saturday in western Finland, but on Palm Sunday in other regions.

Karimäki adds that, as Easter approaches, Finnish children also plant grass seeds in shallow dishes of soil and place birch twigs in vases of water, and watch eagerly for green shoots and “mouse-ear” buds to appear symbolising the springtime reawakening of life. Easter eggs and Easter bunnies – both pre-Christian symbols of fertility – also abound in Finland, though these are more recent cultural imports. 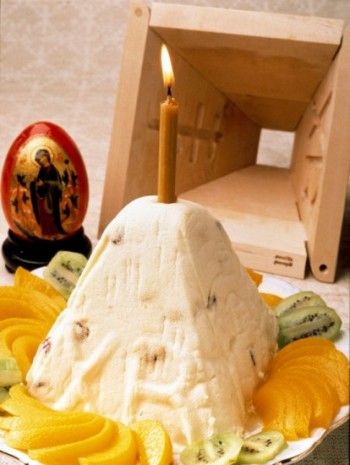 “Pasha” is a creamy-coloured pudding, sometimes made in a mould decorated with religious motifs.Photo: Visit Finland

Roast lamb is the most common main course for a Finnish Easter Sunday family dinner. Two seasonal local desserts are also widely enjoyed. Mämmi is a sludgy-looking dark brown pudding made of malt and rye flour (see below for a link to Finnish Easter recipes).

Mämmi was traditionally served in birch bark trays, but is now available in food stores round the country every spring in prepacked in cardboard cartons. “Though it looks a bit unappetising, it tastes delicious and children love it, especially served with cream and sugar,” says Karimäki.

Pasha is a creamy-coloured pudding made of sweetened homemade cheese, eggs, cream and seasonings left overnight to solidify – traditionally in a mould decorated with religious motifs, especially in eastern Finland where the influence of Orthodox Christianity is more prevalent.

Easter is the most important annual feast day for Finland’s Orthodox Christians, who make up approximately 1 percent of the population, but it is also a time of holy celebration for active members of the majority Evangelical Lutheran Church, which has more than four million members. 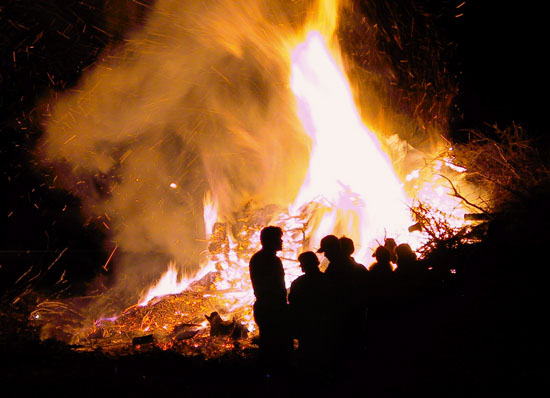 In many western Finnish villages, bonfires are still lit to drive away evil spirits on the evening of Easter Saturday.Photo: samikki/flickr, cc by-nc-nd 2.0

“Evening mass on Maundy Thursday, commemorating the Last Supper, is still one of the most popular church events of the year,” says Iiris Kivimäki of the Evangelical Lutheran Church communications centre. “During Holy Week before Easter concerts such as Bach’s Passion oratorios are also performed in many churches.”

Passion plays and processions have also recently become popular among church-goers. “In Helsinki the processional Via Crucis Passion Play, which ends up at the Lutheran Cathedral on Senate Square, is performed on Good Friday. As many as 15,000 people follow this reenactment of Jesus’s passion and crucifixion every year,” adds Kivimäki.

In many western Finnish villages, bonfires are still lit to drive away evil spirits on the evening of Easter Saturday, when well-attended church services are also held to prepare to commemorate the Resurrection.

The whole country meanwhile enjoys a four-day weekend, perhaps searching outdoors for the first signs of spring – or just as likely sheltering indoors if the weather relapses and late snows fall.