A giganotosaurus stands guard at the Finnish Museum of Natural History.

Travelling on a shoestring budget? Want to see everything there is to see in Helsinki? Here are some tips to check out.

Helsinki is full of free performances, from concerts and stand-up comedy to theatres and clubs. Almost all museums offer free entry at certain times on certain weekdays. Churches are always available to admire both inside and out without spending a cent. You will not want to miss the Lutheran Cathedral, located on Senate Square.

(Temppeliaukio Church, in the district of Töölö, is another favourite, but since this article was originally published, it has introduced an admission charge of three euros per person. That hasn’t stopped people from visiting, though. It’s called the rock church – you’ll see why when you get there.) 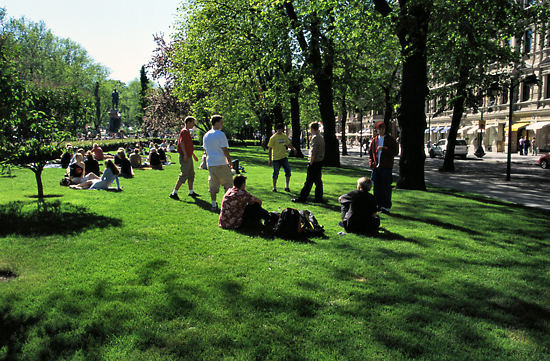 The best thing about the city is its friendly and relaxed atmosphere. Its parks are excellent for eating a picnic lunch and listening to music. The Esplanade, in the very centre of the city, is favoured by tourists and locals alike, and the Esplanade bandstand at the eastern end of the park features every imaginable kind of concert and performance on a daily basis during the summer months. Alppi Park, right next to Linnanmäki Amusement Park, is also a recommended venue for music, dance and theatre at weekends. Linnanmäki, on the other hand, is a great locale for snapping a few photos of the Helsinki skyline, as admission to the park and its 53-metre (174-foot) Panoraama viewing tower are free.

Suomenlinna, a Unesco World Heritage Site located on a group of islands off Helsinki, forms one of the largest sea fortresses in the world. Take the ferry to this wonderful medley of seascapes, terraces and restaurants. (OK, you got us – the ferry to Suomenlinna is not free. But the Helsinki City Transport boat is not expensive.) Wander along twisting cobblestone paths and venture into the tunnels under the fortress walls.

Seurasaari Open-Air Museum also provides a great setting for an evening stroll through history. This small island is filled with idyllic Finnish buildings covering historical periods from the end of 1600s to the 20th century.

Or fancy wandering in the famous Finnish woods? Helsinki’s Central Park is the place to go to if you want to enjoy the peace and fresh air of a forest.

Different sides of the city 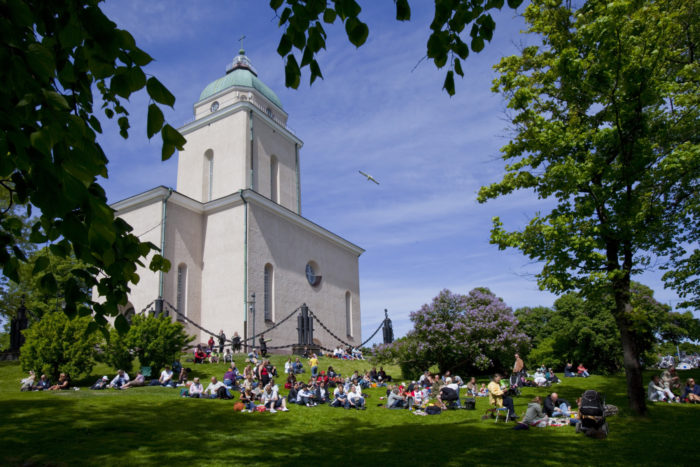 Suomenlinna, an island fortress off the coast of Helsinki and a Unesco World Heritage Site, is home to a church with a tower that doubles as a lighthouse.Photo: Visit Finland

Helsinki boasts a wealth of nightlife. Most clubs require an entrance fee, but there are places with free entry too, especially on weekday nights. Pubs generally do not have entry fees. Stand-up comedy is featured at Teerenpeli, a pub next to Kamppi shopping centre.

You might also consider a moonlight swim at Hietaniemi Beach – or perhaps a sunlight swim would be a more appropriate term, since it never really gets dark at night during summer in Finland.

Helsinki is a beautiful city with influences from several different cultures. Cultural history and architecture buffs will find it worthwhile to look around neighbourhoods with very different characters. Kallio is a favourite with artists and students. The lovely villas by the sea around the waterside park Kaivopuisto are also worth a visit, as are the walking paths around Töölö Bay. Every tourist coach makes a mandatory stop at Sibelius Park, where visitors can admire the sprawling metallic monument dedicated to Finland’s most famous composer.

On top of all this, Helsinki has a reputation as a prestigious design city. Doing some window-shopping around the Helsinki Design District is a great way to spend an afternoon. There is plenty to do without spending money.

Note: Some of the destinations are more easily accessible by public transportation, which costs a couple of euros.

The third annual Ethnogala, a Finnish awards ceremony for folk and world music, was held at the legendary Tavastia Club in Helsinki in January 2020. An array of performers played live at the event.

Taking to the streets for a spirited Helsinki ghost walk

Halloween (October 31) is a traditional season for ghostly activity, but Helsinki’s phantom tales are spooky at any time of the year. The city’s ghost walks perpetuate eerie legends.

A group of leading travel bloggers tour Finland to discover the country’s most exciting activities and cuisine.

The 2019 Work-Life Balance Index has listed Helsinki as the best city for work-life balance among 40 of the world’s most attractive cities.