A great day for a swim: Winter water temperatures always stay just above zero Celsius (32 Fahrenheit), even when a layer of ice forms on the surface.

From late autumn until spring, a removable bridge connects the small island of Uunisaari with Kaivopuisto, the park that covers Helsinki’s southern shore. On a frosty winter morning, the silence on the island is repeatedly broken by a stream of scantily clad figures scampering between a low sauna building and a jetty before bravely plunging into a large hole cut into the frozen surface of the ocean.

Each winter as many as 150,000 Finns “enjoy” taking regular dips in the chilly lakes and sea bays. People who are unfamiliar with the practice often ask one question: Why?

“The shock of the icy water gives you a cold rush that makes you feel really alive, and afterwards you feel extremely calm and refreshed,” explains Jonas Sipilä, secretary of Uunisaari Arctic Swimming Club. “You leave your stress behind in the sea, and the whole experience is quite addictive.”

The club has about 220 members, ages 12 to 75, from shipyard workers to managing directors. Most live locally, like Sipilä, who takes the plunge at Uunisaari almost every day, even when the sauna is not heated. The keenest aficionados still swim at Uunisaari when air temperatures plummet to minus 20 degrees Celsius (minus 4 Fahrenheit), since water temperatures always stay just above zero Celsius (32 Fahrenheit). 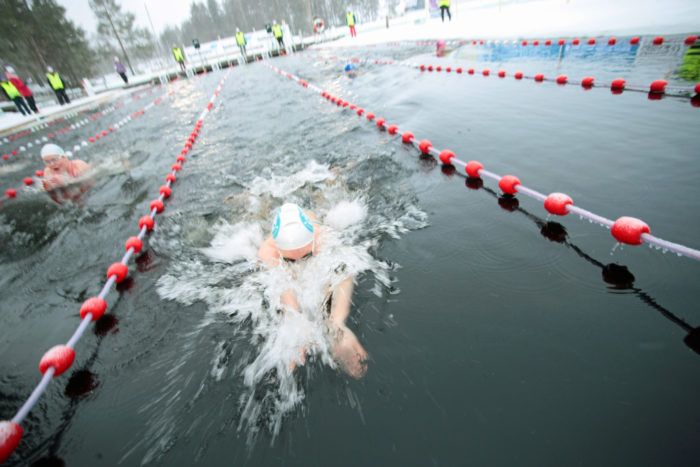 The club’s chairperson, Sirkka Mäkeläinen, is convinced that regular indulgers enjoy many physical and mental health benefits as well as a buzz. “Most feel they suffer less from stress, colds and painful ailments,” she says. “Many also say they sleep better at night and feel more awake during the day.”

“There’s definitely a feeling of overcoming an exciting challenge,” says Mäkeläinen, as we sip warm drinks in Uunisaari’s cosy café after our icy ordeal. “There’s also a social side to winter swimming clubs, especially since having a sauna together is often part of the experience. I’ve made many friends through the club.” 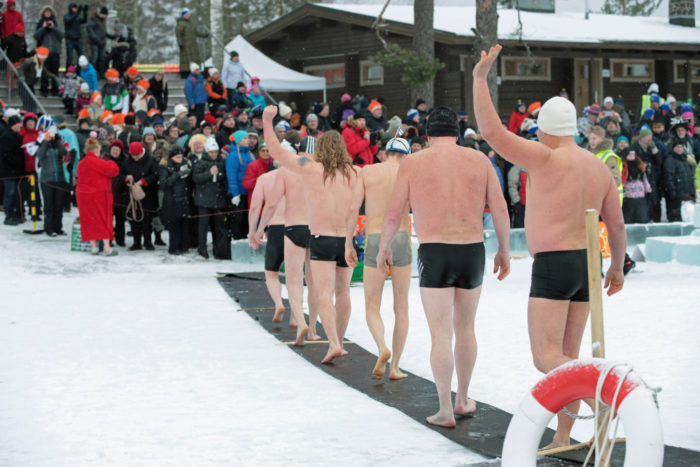 The season-appropriate winter coats and snowsuits of the fans make for a comical contrast with the swimsuit-clad contestants.Photo: Hernan Patiño

Finland has over 200 registered winter swimming clubs and facilities, while many more people make smaller ice-holes near their homes using spades or chainsaws.

National championships have been held in various locations annually since 1989, though Finns are known to have relished this eccentric pursuit since the 17th century. The first clubs were founded back in the 1920s.

The 2017 championships, held at the lakeside Tanhuvaara Sports Institute in eastern Finland, attracted nearly 800 participants competing in age groups from under-20s to over-70s, and about the same number of landlubber spectators. “For 2017 we added new events, including 50-metre breaststroke and 25-metre freestyle, as well as the traditional 25-metre breaststroke and exciting 4×25-metre relay races,” says co-organiser Hanna Okkonen, who coordinates winter swimming activities for the Outdoor Association of Finland. “Competitor numbers show that winter swimming is particularly popular among middle-aged women, but the youngest entrant was 13, and the oldest 84.”

A great way to test yourself 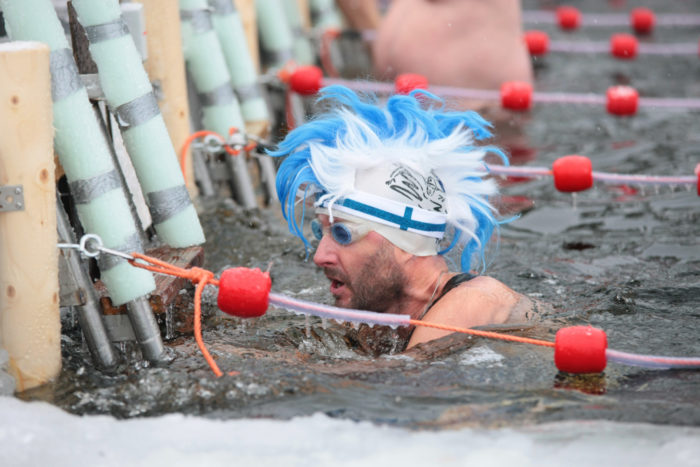 Swimmers show off all kinds of hats, from bathing caps to top hats to – this.Photo: Hernan Patiño

Headwear is compulsory – in the shape of conventional bathing caps or silly woolly hats – and frogmen are on standby in case anyone flounders. Though most competitors are here for fun, others take the races very seriously – including some with impressive track records as competitive swimmers or even Olympians. Times are slower than they are at summer events, since competitors start from a standing, shivering position already in the pool, instead of diving in.

Elina Mäkinen, 23, from Joensuu, recently swam an “ice mile” at two degrees Celsius (35.5 Fahrenheit) at a Wild Water event in Armagh, Ireland, in just over 26 minutes. “I don’t seem to feel the cold too badly, and winter swimming is a great way to test yourself and meet positive people with similar interests,” she says.

Anja Selenius, 79, has won 15 gold medals in her age group at world championship events in Finland, Latvia, London, Slovenia and Siberia. She swims outdoors near her home in the eastern Finnish town of Punkaharju twice weekly all year round. “It’s worth practising swimming style, starts and turns regularly ahead of big events,” she says. “I’ll be 80 next year for the 2018 championships, but largely thanks to swimming I don’t suffer from any rheumatism – and I can’t remember when I last had a cold.”

Selenius is already mentoring a young successor: 14-year-old Viivi Paasonen, from the same swimming club. Paasonen swam 25 metres in less than 20 seconds at this year’s Finnish championships. “I’ve swum competitively since I was 8, but this is my first winter season,” she says. “My schoolmates are amazed that I dare to do it, but it’s a great feeling swimming in an ice hole. I’m very excited about the chance to go to the world championships in Estonia next year with Anja and our teammates.”